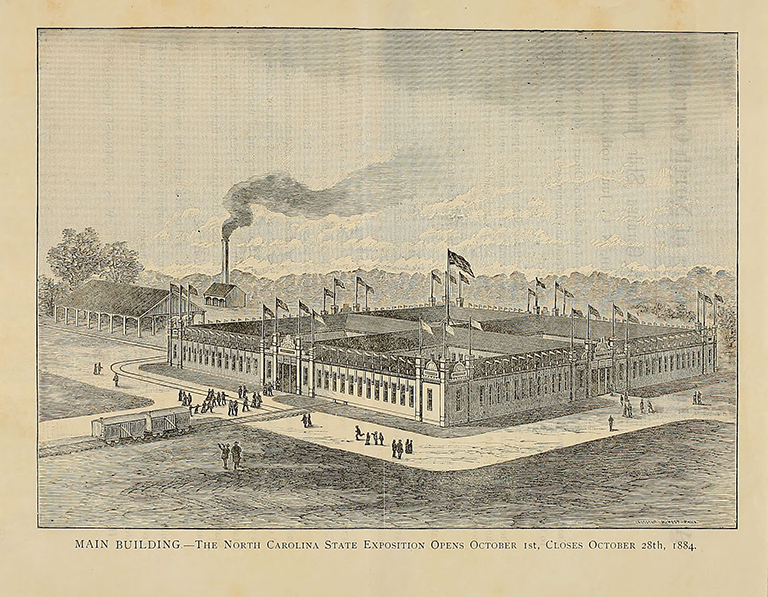 Established in 1882 to manufacture railroad cars, the North Carolina Car Company was also a major participant in the construction industry, using mass production to make high quality prefabricated building materials and erecting buildings with remarkable speed and economy. Located beside the Raleigh and Gaston Railroad in Raleigh, the company’s shops were ideally placed to receive shipments of lumber and to send out their products. Among the firm’s most notable accomplishments was the rapid construction of the immense State Exposition Building, built in Raleigh in 1884, an elaborate 75,000-square-foot structure designed by architects Samuel Sloan and A. G. Bauer. The company also did substantial work on Sloan’s North Carolina Executive Mansion and Bauer’s Baptist Female University.

The North Carolina Car Company received extensive coverage in local newspapers. According to a history of the company in the Raleigh News and Observer of October 28, 1883, two builders, T. A. Kingsley and W. E. Ashley, operating as Kingsley and Ashley, established in 1874 a planing mill in northern Raleigh. In 1880, they contracted to build 150 freight cars for the Raleigh and Gaston Railroad. The work was done so well that “attention was directed” to the idea of establishing a “car manufactory,” which came about in 1881. An immense 2-story building was added to the old shops. “The building is in a few feet of the Raleigh & Gaston railroad and through it run two tracks, so that cars loaded with lumber run right to the planing machines and bringing lumber in the rough take it away squared, dressed, morticed, &c.”

William E. Ashley called a meeting of the incorporators and subscribers of the North Carolina Car Company on February 9, 1882, at the office of Raleigh’s mayor, John C. Winder. The News and Observer reported on February 12 that subscriptions had enabled the company to increase its capital stock from $30,000 to $50,000. Winder was the president of the firm and Kingsley the superintendent. The purpose of the company was “the construction of railroad freight cars, and all manner of work in wood.” The company would employ about 75 workers and have “the latest fast-running machines.”

By the next year, the News and Observer of April 24, 1883, reported that in addition to producing hundreds of passenger cars and freight cars, the company had published a price list of sash, doors, blinds and other fittings and furnishings,” made with machinery “all new and of the best patterns.” The News and Observer of October 28, 1883, described the operation, including the planing mill which produced “sash, doors, and all kinds of wood work for houses, this being an important branch of the business.” Another account noted that cars full of long leaf yellow pine lumber, loaded at saw mills 60 miles away, were “run into the shops directly to the machines that work it” (Weekly State Chronicle, January 12, 1884).

In 1883, Winder resigned as president of the company and was replaced by Gen. R. F. Hoke, and Kingsley was replaced by W. E. Ashley as superintendent (Charlotte Democrat, September 28, 1883). On December 5, 1883, Kingsley died at age 56; the News and Observer of December 6 noted that he had arrived in Raleigh in 1873 from New York state.

A spectacular display of the firm’s work was the Exhibition Building for the North Carolina State Exposition, a big project on a tight schedule. The News and Observer of March 25, 1884, reported that the plans for the large, ornate building were “substantially those offered by the North Carolina car company, altered and amended by Mr. W. J. Hicks, architect of the penitentiary” (William J. Hicks), who had prepared the specifications for the building. The plans were drawn “in the office of Mr. Samuel Sloan, who has carefully supervised this work with Mr. Hicks—by Mr. Sloan’s assistant and draughtsman Mr. A. G. Bauer.”

The lumber contract went to A. F. Page and Sons of Blue’s Crossing (see Allison F. Page), and the construction contract to the North Carolina Car Company (Alamance Gleaner, April 10, 1884). Work went quickly, and reporters from the News and Observer visited the site daily. On September 20, 1884, with the building completed and being painted in red, blue, and green, one writer said “The North Carolina Car Company cannot receive too high praise for its work, so well and so promptly done,” in connection with the buildings, and cited W. E. Ashley for his “remarkable energy and promptness.” Samuel Sloan died in Raleigh on July 19, 1884, and his obituary credited him with the State Exposition buildings, among other works (News and Observer, July 20, 1884). Later sources cited only Hicks as the as the “Architect” of the building (Winston-Salem Western Sentinel, October 30, 1884).

Along with continuing to produce hundreds of railroad and street cars, the firm also contracted for other substantial construction projects. Among these were Stronach’s Warehouse, one of Raleigh’s few tobacco warehouses (News and Observer, April 15, 1885) and a gymnasium at the University of North Carolina in Chapel Hill, which had been designed by architect Samuel Sloan (News and Observer, March 31, 1885; Durham Recorder, July 29, 1885). The Durham Recorder commented that the building of “ready-made houses has been known as the ‘Chicago idea;’ and just now it is a North Carolina idea, and we can add that the North Carolina Car company can and will build a frame house according to any plan, will build it here in Raleigh and ship it to any point in the State, and do it for from ten to twenty per cent less than local builders will undertake the same job.”

In 1889, when the completion of the North Carolina Executive Mansion in Raleigh faced delays, contractor William J. Hicks, “architect and warden of the prison,” who was managing the work on the mansion, advertised for bids to complete several elements, including the front steps, balconies, basement, first and second stories, stairs, and plumbing (State Chronicle, May 24, 1889). Just over a year later, the News and Observer of August 16, 1890 reported that the “Raleigh Car Company [sic], who had the contract for putting the finishing touches on [the mansion], have done the work in an exceptionally short time, considering the amount of work required, and with the usual excellence.”

In 1890 the company was reported to have contracts for several hundred cars and more than twenty buildings, and had more than one hundred men working in the shops (State Chronicle, November 9, 1890). In that year the company contracted to build an ice factory, located on West Street near the railroad, to be 70 by 100 feet (State Chronicle, March 12, 1890). It also took the contract to complete the woodwork and plastering of the Central Methodist Church in Raleigh, which was completed in Queen Anne style in 1891 at the corner of North Person Street and East Morgan Street (Raleigh Evening Visitor, November 18, 1890; Raleigh Christian Advocate, November 25, 1891). Of special importance, in 1891, the company contracted to execute the brick and wood work of the new Union Passenger Station in Raleigh, an imposing and prestigious brick building facing Nash Square in downtown; it was completed in 1892 to great acclaim (State Chronicle, October 2, 1891, August 14, 1892). In 1893 the car company was preparing the “railing and posts for the forestry exhibit” by the state in the Forestry Building at the World’s Fair in Chicago (Charlotte Observer, March 23, 1893), but few building projects appeared in papers for a time, likely due to the national financial crisis. Several years later, the car company won another prestigious contract–to finish the interior work of the immense Baptist Female University in Raleigh, which had been designed by A. G. Bauer and was nearing completion in 1898 (Charlotte Observer, July 6, 1898).

Meanwhile, however, in the unpropitious year of 1893, the company decided to add the manufacture of car wheels to its operations in connection with the Lobdell Company, which had an iron furnace at Egypt, several miles west. The Lobdell Company took a “large block of the Car Company stock,” and in 1894 an expensive new plant for wheel production was added to the Car Company’s complex. In that year, George G. Lobdell, the head of the Lobdell company, died. Operation of the car wheel factory proceeded but encountered various troubles including shutdowns in 1897 (New Bern Daily Journal, June 16, 1897; News and Observer, December 21, 1897).

The North Carolina Car Company mortgaged its property in 1897, and in 1898, a windstorm seriously damaged the Car Company plant (Raleigh Times, February 16, 1898). In early 1899, despite its active contracts, the firm’s financial problems, as the Greensboro Telegram of March 22, 1899, put it, “forced it to the wall.” With liabilities considerably exceeding its assets, it went into bankruptcy in March 1899 (Wilmington Semi-Weekly Messenger, June 30, 1899). The News and Observer explained that the company had, “it is thought,” overdrawn the money due for work at Baptist Female University, and some of the materials had not been paid for. The News and Observer of March 25, 1899, assured readers that the Baptist Female University would “lose nothing by the failure of the North Carolina Car Company, as was first feared.” The Car Company property was subsequently sold at auction, including its equipment. The New Bern Daily Journal of September 27, 1903, stated that “At one time this was an important enterprise and built a good many cars, also furnished material for houses. Then it engaged in the manufacture of car wheels and soon afterwards failed.” Despite the company’s nominal identity as a manufacturer of rail and street cars, it had for several years played an important role in the construction and completion of some of Raleigh’s most imposing buildings of the 1880s and 1890s and probably constructed others as yet to be identified.