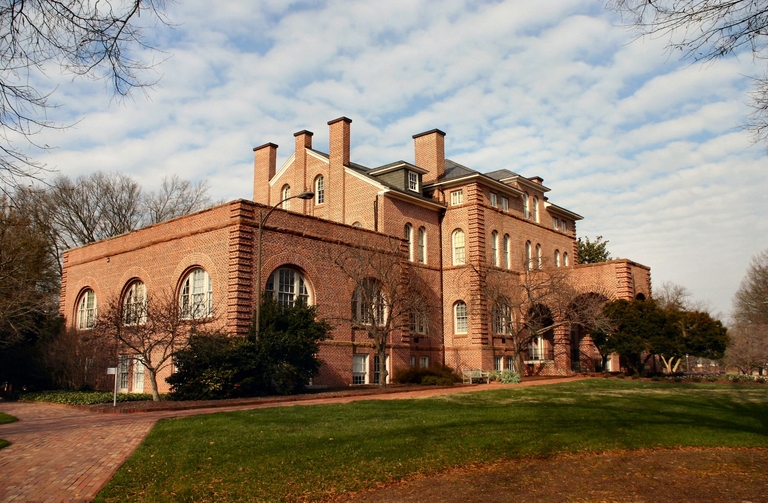 Born in Baltimore, Carson was educated in local schools before working for his father’s construction firm. There he learned the practical aspects of building, gaining knowledge that served him well throughout his career. He was apprenticed to Baltimore architect Thomas Dixon and progressed in the firm to become a full partner in the 1860s. About 1876, Carson began to practice architecture independently, becoming a prominent designer in Baltimore and also gaining commissions throughout the South. In Baltimore alone, he designed some 150 buildings between 1880 and 1891, when he died at age 44. Among his important works in were the Equitable Building and Enoch Pratt Free Library in Baltimore and buildings at the University of Tennessee in Knoxville.

Carson’s chief accomplishment in North Carolina is the massive, powerfully composed Romanesque Revival style brick building now known as Holladay Hall (1888-1889). As the original main building of the newly founded North Carolina College of Agriculture and Mechanic Arts, now North Carolina State University, the brick edifice established a strong public presence for the new institution, and it contained all the college facilities, including offices, classrooms, and dormitory rooms. Although it was large and imposing, its design was straightforward and unostentatious. Its character derives from its bold massing, broad arched openings, and handsome brick and stonework rather than from costly materials or ornate decoration—a mode befitting the economy of the times as well as the mission of a college established to promote “liberal and practical education of the industrial classes in the several pursuits and professions of life.”

Like some other state buildings of the day (such as the North Carolina Executive Mansion designed by Samuel Sloan, which was under construction at the same time), it was built of brick manufactured at the State Penitentiary (see William J. Hicks), which was located not far away. In fact, the bill authorizing the establishment of the college specified that the directors of the State Penitentiary would furnish bricks and convict labor for the buildings of the new institution. The use of “penitentiary brick” and North Carolina brown sandstone were lauded as important economies that displayed the state’s resources.

Carson may have undertaken other work in the state, but little is known of it. In present Winston-Salem, it was announced in the Manufacturers’ Record of September 19, 1891, that industrialist H. E. Fries in connection with Fogle Brothers, a leading local building firm, was planning to erect five brick apartment houses in Salem, which would stand four stories tall and measure 63 by 100 feet, according to plans “prepared by Charles L. Carson of Baltimore.” It is unclear whether these were built; they are not known to survive.

The notice of his untimely death in American Architect and Building News (December 1891) opened with the following observation: “Overwork, apparently, has claimed another victim from the ranks of a profession whose practitioners seem to be able to achieve success only by running a risk and enduring a physical and mental strain which no person whose occupation is mainly sedentary can hope to withstand successfully.” Carson was widely respected among his peers and his fellow citizens of Baltimore.