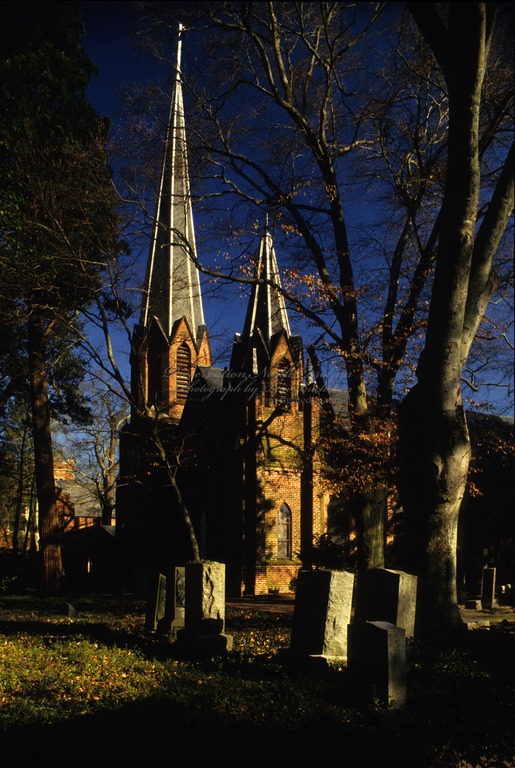 Thomas H. Coates (Coats), a builder active in antebellum Tarboro and Raleigh, is best known for the Gothic Revival churches he built from designs by architects J. Crawford Neilson and William Percival during the 1850s when the picturesque movement enjoyed favor among prosperous North Carolinians. His background is not established: he was variously identified as being a former resident of Petersburg, Virginia; as a “New England man” in Kemp Plummer Battle’s History of the University of North Carolina; and as a native of England in the 1870 United States Census.

Coates’s first known project in North Carolina was as the contractor “from Petersburg” who built Christ Episcopal Church in Elizabeth City in 1856-1857 from designs by Baltimore architect Neilson. This was soon followed by his role as contractor for First Baptist Church (1857-1859) in Raleigh from designs by architect William Percival, a project that led to Coates’s residency in North Carolina. Percival had also worked in Virginia and may have known Coates there. The commission for the large Gothic Revival church at the center of Raleigh launched Percival’s brief but prolific period of work in the state. Coates’s name as well as Percival’s appears on the plaque at the church.

Percival’s expertise in picturesque modes soon led to commissions for other edifices in the state, including Calvary Episcopal Church in Tarboro and New East and New West at the University of North Carolina, for which Coates also served as builder. (Other Percival designs were executed by other contractors including Briggs and Dodd.) Although Percival left North Carolina abruptly in the spring of 1860, with Calvary Church, New East, and New West unfinished, Coates stayed on. He completed the university buildings and raised the brick walls of the Tarboro church, which stood unfinished until after the war. According to university president Kemp Battle, in 1860 Coates planned and built the cupola on South Building.

Also in 1860, Coates advertised in the Raleigh Register of January 11 and June 18, 1860 that he had located in the city and was “prepared to make contracts for public or private Buildings, in any part of the State.” He was prepared to furnish granite “in its rough state for Building or other purposes, or dressed to order in any shape required, at reasonable rates.” He hoped to receive orders or inquiries at his post office box (#249) in Raleigh, or, indicative of his relationships in Raleigh, orders for stone could be left with James Puttick (a Raleigh stonecutter who had earlier worked on the State Capitol). It is possible that he was the “T. H. Courts” noted in the census of 1860 as a contractor aged 40, a native of New York, residing in Raleigh in the household of the Allen family.

Coates’s activities during the Civil War have not been identified. Evidently in the early 1860s he built in Tarboro a picturesque brick residence, the Coates House, based on a plate for a “cottage with cupola” in Minard Lafever’s Architectural Instructor. Whether he resided there is unclear. Promptly after the war, he advertised the Tarboro house for sale in the Tarboro Southerner of December 12, 1865 as “a new brick English cottage” with a “nicely laid out yard” convenient to the railroad, but he did not sell it for two years.

The only building credited to Coates after the war is Raleigh’s Tucker Hall, an elegant 3-story commercial building which opened on Fayetteville Street in 1867 to great acclaim. The August 28, 1867 Daily Sentinel described the edifice in detail including its iron and plate glass façade and grand auditorium. The architect was identified as one B. F. Warner of Brooklyn, New York, and Thomas Coates of Raleigh was the contractor. The client, Rufus Sylvester Tucker, was a wealthy merchant for whom Percival had designed an elaborate villa in Raleigh on the eve of the Civil War.

In April 1869 Coates was declared bankrupt by the court (Wake County Deed Book 29, p. 45), but he soon rallied and placed an advertisement (dated November 23, 1869 in the Raleigh Daily Standard, January 1, 1870) announcing that “T. H. Coates, Architect” had opened an office on Wilmington Street and could furnish designs and estimates for public, private, and farm buildings as well as superintendence. He cited his knowledge of “all kinds of material” and his experience in North Carolina for the last 15 years. The United States Census of 1870 identified him an architect and a native of England, living by himself in Raleigh near other tradesmen. Other bankruptcy proceedings followed. In 1873 Coates was employed to draw up a “plan of improvements” for Raleigh’s courthouse square, and he was in Raleigh as late as 1879. His death date has not been ascertained.