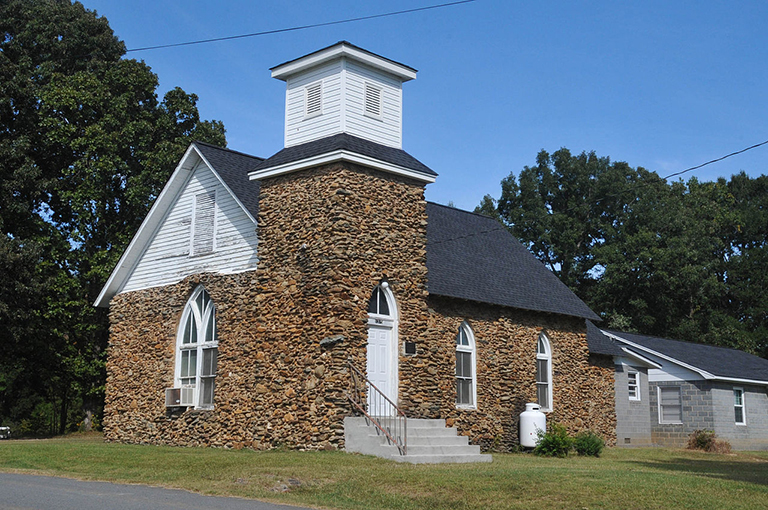 Robert Franklin Lynn (September 20, 1867- July 21, 1951) of Cabarrus County, N. C. was one of many African American men who specialized in masonry work, and like some others including Oliver Nestus Freeman (1882-1955) crafted distinctive stonework that enriched the architectural character of their communities. His best-known work is the small, Gothic Revival-style First Congregational Church in Mount Pleasant. Completed in 1921 to replace an earlier church that burned in 1918, First Congregational Church features an entrance tower and belfry and is distinguished by Lynn’s ruggedly irregular stonework. Lynn also executed other similarly picturesque stonework in the area. The Misenhimer-James House in Mount Pleasant, designed by architects Hook and Rogers of Charlotte for a prosperous industrialist who had moved from Charlotte, features a wealth of Lynn’s work. It is likely that Lynn undertook numerous other projects in the community which have yet to be identified. For Lynn’s own Summer Street residence in Mount Pleasant, which he built about the time of his retirement in 1939, he used his rugged stonework throughout, from the walls to the round porch posts and stone mantel.

Little biographical information has been located concerning Robert F. Lynn. A few basic items appear in public records, some of which contradict one another. The Cabarrus County marriage record which notes Robert’s marriage on October 20, 1890 to Ellen (Helen) V. Heilig, aged 22, identifies Robert’s parents as Robert and Harriet Lynn, his father being deceased by 1890. According to his social security form of 1941, Robert Franklin Lynn was born on September 20, 1867 to Frank Lynn and Harriet Brawley Lynn, but an index to death records in North Carolina gives the dates of Robert F. Linn (sic) as 1868-July 21, 1951. Other sources, including Kaplan’s Historic Architecture of Cabarrus County, give his dates as 1867-1949.

In any case, the census of 1900 recorded R. F. Linn, a bricklayer aged 32, as living in Albemarle in Stanly County with Helen V. Linn, also 32, and children Otha, Ophelia, Harry, and Howard. There are numerous masonry buildings in Albemarle and Stanly County from this period, especially after the railroad arrived in 1891, but no examples have been cited yet as Lynn’s work. In 1910, the census listed the Lynn family as residing in Cabarrus County, and they had two younger children, Helena and Nina. The mason and his family resided in a house he owned. The family continued to live in Mount Pleasant. In 1940, Robert and Helen were living in the household headed by their son, Howard (1895-1961). Robert likely trained Howard in his trade and worked with him. Both Robert and Howard Lynn were noted as brickmasons employed in a “W. P. A. Building project.” Their specific W. P. A. projects have not been identified. In 1942, Robert Lynn and his son, probably Howard, completed a church in High Point, N. C., and it is likely that they worked on other buildings as well. The cemetery associated with First Congregational Church contains gravestones for some of Robert and Helen’s children, including Howard. How and from whom Robert F. Lynn learned his trade and identification of other examples of his work remain open to investigation.