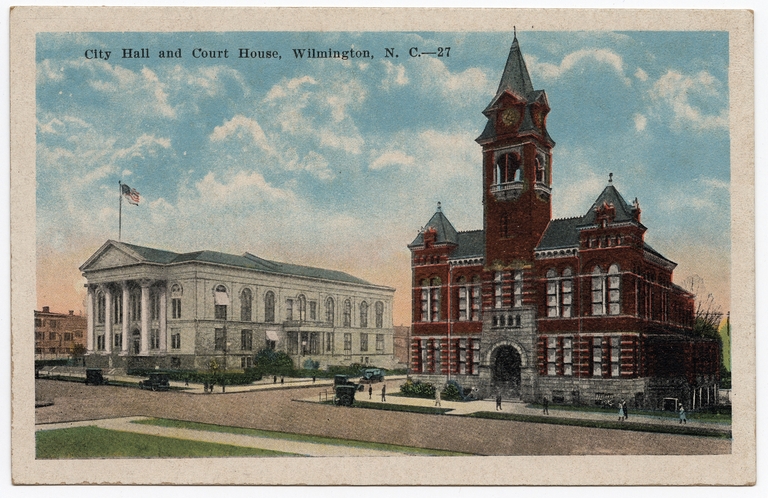 Alfred S. Eichberg (August 23, 1859-May 15, 1921), a leading Savannah architect, designed two buildings in North Carolina, both in Wilmington: the F. Rheinstein and Company Building and the New Hanover County Courthouse, the latter being one of the state’s few surviving examples of the massive and eclectic courthouses of the late 19th century. Eichberg is regarded as one of the first, if not the first, Jewish architects practicing in the Deep South.

According to his current biographer Richard Funderburke, Eichberg was a native of New York who grew up in Atlanta and spent the rest of his life in Georgia. He was the son of Caroline Bandman and Joseph Theodore Eichberg, a plumber and owner of a plumbing business in New York whose parents had come to New York from Europe. After serving in the Union Army, Joseph moved his family to Atlanta in 1869, where he continued in the plumbing and related businesses, and they became prosperous and influential citizens. The young Alfred traveled to Germany to pursue his architectural education, probably in Stuttgart. In 1881, Eichberg formed a partnership with an established Georgia architect, Calvin Fay. The firm of Fay and Eichberg (1881-1888) designed several small buildings for the International Cotton Exposition (1881) in Atlanta, and obtained major commissions in Atlanta and Savannah during the 1880s. Among these were the Atlanta Chamber of Commerce, Savannah’s Telfair Hospital, and the Central of Georgia Railway building (now called Eichberg Hall), as well as many residences and smaller projects.

Eichberg soon moved to Savannah, and by the late 1880s Fay’s health was in decline, and Eichberg was practicing on his own. Becoming one of Savannah’s leading architects, and one of the very few Jewish architects practicing in the South at the time, he found a strong clientele among both Jewish and Gentile clients. Eichberg’s practice extended into other southern states, including Florida, South Carolina, and North Carolina, where he planned buildings in eclectic styles with a special focus on the Romanesque Revival in red brick with ornate stonework trim. His business thrived in the early 1890s but dwindled with the economic depression of 1893. In 1894 he employed Hyman Witcover as a draftsman, and Witcover later became a partner and had an important architectural career. In about 1900 Eichberg returned to Atlanta, where he continued some architectural work in connection with the family ironwork firm. He passed away on May 15, 1921, and was interred at Oakland Cemetery in Atlanta.

As described by Tony P. Wrenn in Wilmington, North Carolina: An Architectural and Historical Portrait, the Rheinstein and Company Building brought architect Eichberg to Wilmington, and that project probably led to his commission for the courthouse. The Rheinstein firm, one of several businesses founded by members of Wilmington’s strong Jewish community in the 19th century, was formed as Aaron and Rheinstein in 1867 and became F. Rheinstein and Company in 1887. In 1902, the local Wilmington Up-to-Date called the 4-story, brick and stone edifice in Romanesque Revival style “the most imposing mercantile structure in the city.” The builder was architect-builder John C. Stout, then a newcomer to Wilmington.

Although many imposing and eclectic courthouses were built in North Carolina in the late 19th century, nearly all of these have been lost, leaving Eichberg’s massive, towered, Romanesque Revival style New Hanover County Courthouse in Wilmington one of the few of its type still standing in the state. His elaborate, symmetrical design incorporates his characteristic red brick and rough stone trim, and combines several styles of the day including the Romanesque, hints of the Chateauesque, and Neoclassical Revival elements in the columns and other details. James F. Post, the experienced architect and builder, served as supervising architect, a role he had played in construction of the neighboring Thalian Hall-City Hall many years before.

As Wrenn reports, in the spring of 1891 New Hanover County’s commissioners sought designs for a new courthouse to be built on a new site, and after reviewing plans from four architects, the board selected those by “Mr. A. S. Eichberg, the well-known architect of Savannah, Georgia.” The Wilmington Messenger ran a “very handsome picture” of the building on August 18, 1891, and reported that the architect had presented plans and specifications by August 29. On November 17, when the county accepted the construction bid from Valentine and Brown of Brunswick, Georgia, the newspaper praised the proposed building for its “handsome” and “elaborate” style as well as its comfort and convenience, noting that the intersecting passages would assure “the draught necessary at all seasons of the year.” The newspaper noted, “Mr. Eichberg, the architect, who by the way, is also the architect of Mr. F. Rheinstein’s fine building, is one of the leading architects of the United States. He is not only known in the South, but has a national reputation. . . . and has designed many of the most modern buildings in the Southern and Western states.” Work proceeded throughout 1892, and on April 9, 1893, the building was opened for the inspection of the public. It was “universally admired” as “not only the most handsome but the best arranged building of the kind” in the state, featuring gas and electric lights, hot water heat, and “perfect” ventilation.