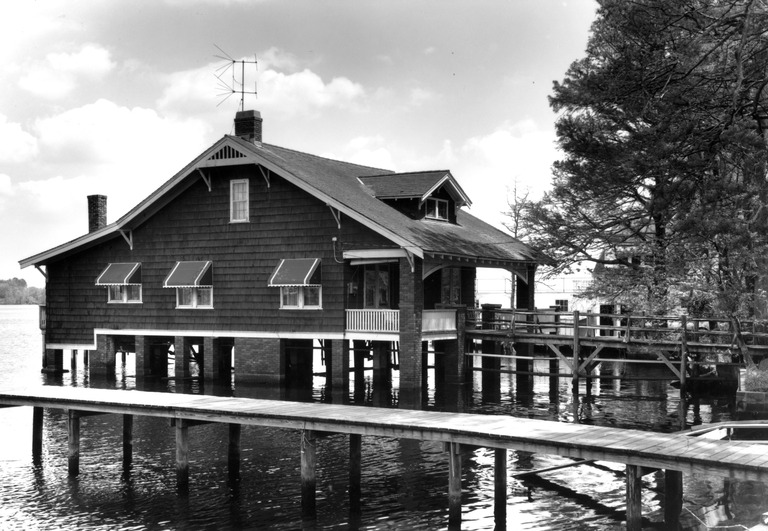 Lord Byron Perry (August 2, 1870-January 3, 1948) was a local contractor who worked in the Albemarle region in the early 20th century, encompassing many different types of buildings in Perquimans, Pasquotank, and Chowan counties. Perry was born in the Durant’s Neck section of rural Perquimans County, the son of Alexious (Alexis) and Carolina White Perry. In the census of 1880 and 1900, he was listed simply as Byron Perry, but from 1910 onward he was listed as Lord B. or Lord Byron Perry. How he learned the building trade is not established, nor is it known whether Perry had construction skills himself or only managed a workforce of artisans. As a young man, he was a successful businessman in his home county with a wide range of agricultural and business interests, including the operation of lumberyards and sawmills. In 1917, Perry moved to nearby Elizabeth City where he established the L. B. Perry Motor Company. He later turned over the motor company to his son and devoted himself to his building contracting business.

Like many other builders, he sometimes worked from architects’ plans and sometimes apparently developed the designs himself. He handled some of the largest building jobs in his rural region, with work in Pasquotank, Perquimans, and other counties. In addition to his extensive work in Elizabeth City, he constructed a number of buildings in nearby Edenton, including residences and commercial buildings. Typically his buildings present unpretentious, solidly built renditions of current styles, including Craftsman bungalows and straightforward commercial modes.

Lord Byron Perry retired in 1942 after suffering a stroke while directing the construction of the radar tower at Kitty Hawk in Dare County. He and his wife, Sally E. (Morgan) Perry, are buried in the Perry-Trueblood family cemetery, New Hope, Perquimans County.