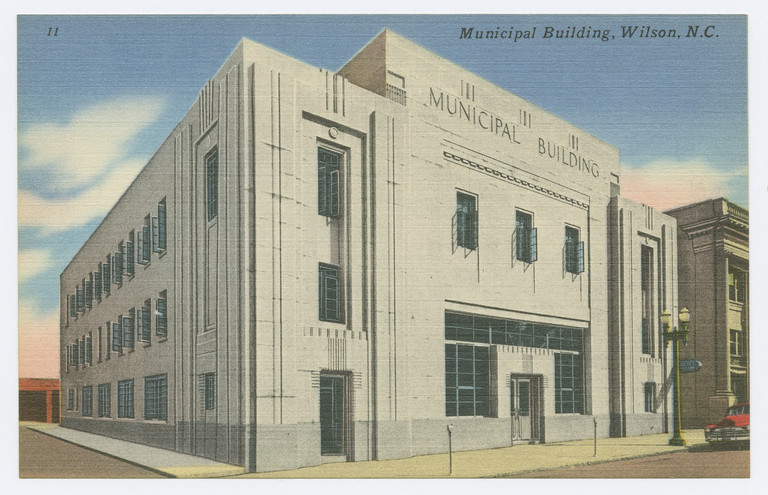 Frank W. (Whitaker) Benton (1883-1960) was an architect headquartered in Wilson, North Carolina, who along with his brother Charles C. Benton, Sr formed the prolific firm of Benton and Benton. During their partnership from 1915 to 1935, the Bentons designed buildings of nearly every type—residences, banks, churches, and civic buildings—and encompassed much of eastern North Carolina and reached westward into the foothills. Although the firm specialized in neoclassical and Colonial Revival buildings, Frank favored streamlined and Art Deco modes, and after he began his own practice in 1935, many of his buildings exemplified these trends.

Frank W. Benton was born in Wilson about 1883, one of at least seven children of Henry Benton, a mechanic (perhaps meaning a builder in the parlance of the day), and Margaret Whitaker Benton. His early life and work have not been documented, nor is it known how either he or his younger brother Charles gained training or experience in architecture. By 1910 Frank and Charles, both identified as architects, were living in Wilson with their widowed mother. Although Charles married in 1911, Frank remained single through 1920 but by 1930 had married his wife Helen. (Frank’s middle name has sometimes been given as Warthall, but both his World War I draft registration form and his death certificate show it as Whitaker.)

Compared to the numerous works cited to Charles in the early years of the century, little is known of Frank’s architectural activities before 1915. In that year, Charles dissolved his partnership with Solon B. Moore and entered into a partnership with Frank as Benton and Benton. Whereas much of Charles’s earlier work had been relatively local, the brothers developed a broad regional practice. Because no records of the firm’s operation are known to survive, the division of work between the two brothers is not known.

The firm of Benton and Benton, which continued from 1915 to 1935, proved highly prolific. Taking advantage of the growing demand for substantial buildings in many small and middle-sized communities, the firm gained commissions that extended from Elizabeth City in the northeastern part of the state to as far west as North Wilkesboro and Morganton. Seldom taking projects in larger cities, the firm found a profitable niche in county seats and market towns. Their designs and their services suited a wide range of clients from homeowners to civic officials. for whom they planned handsome and relatively conservative versions of prevailing architectural forms and styles. (An exception came in the early 1920s: according to research by John E. Wells, by 1921 Benton and Benton had an office in Richmond, Virginia, which became Benton and Bengston [for associate Luther Bengston] in 1922 and closed by 1925.)

Benton and Benton developed a strong reputation in various classical and Colonial Revival modes popular in the region. For the modestly budgeted courthouses in Montgomery and Washington counties and elsewhere they employed the symmetrical forms and prominent porticoes that were the norm in the period. The firm also designed a number of reassuringly monumental neoclassical banks that asserted a new presence in many towns: typically located on prominent downtown corners, these banks presented a columned, vault-like façade or entrance to the main street and had classical pilasters along the side street. Benton and Benton and later Benton and Son(s) planned residences in a range of popular styles, including columned “Southern Colonial” and other Colonial Revival modes, as well as substantial bungalows with bold Craftsman detailing, such as the Lloyd and Lillian Turnage House in Ayden; Benton and Benton’s blueprints for the latter, held at the Special Collections Research Center at North Carolina State University Libraries, Raleigh, North Carolina, are among the few drawings by the Benton firms known to survive. Despite the onset of Great Depression, the partnership continued until 1935, when the brothers went their own ways.

While Charles established a partnership with his sons Charles and Henry, Frank W. Benton continued to practice on his own, chiefly in Wilson. Although he continued to produce classical and colonial styles, his modernist designs are especially notable for their time and place. His WPA-assisted projects include the Colonial Revival style Wilson County Public Library and the more modernist Wilson Municipal Building (1938). He also designed the locally exceptional modernist Cornelius Sarvis Bass House in the 1940s. Frank retired from the profession several years before his death on December 15, 1960. No job list for Benton’s practice is known to exist, and scarcely any drawings or other records survive. Further information is sought.