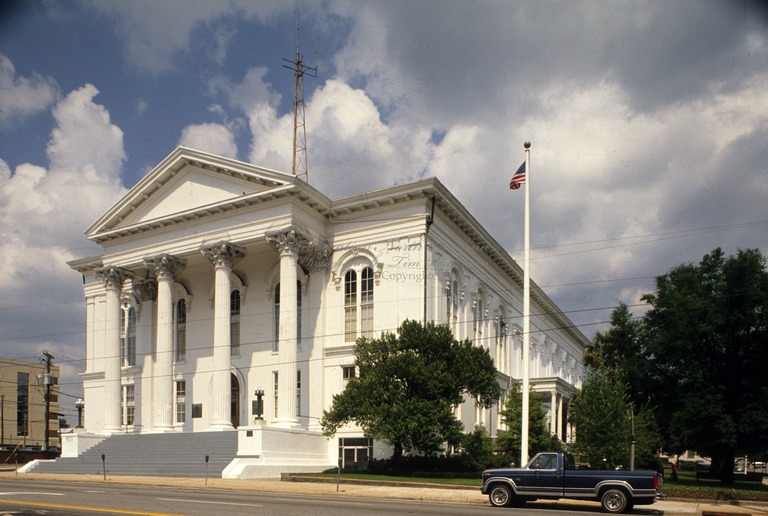 George W. Price, Sr., (ca. 1810- September 11, 1882) and George W. Price, Jr., (ca. 1843-October 22, 1901) were leading ornamental plasterers in Wilmington, North Carolina. They learned their trade as enslaved artisans and accomplished the finish work on some of the city’s principal antebellum buildings, including the City Hall-Thalian Hall and the Bellamy Mansion. After the Civil War they continued to practice their trades as well as taking prominent roles in religious, civic, and political affairs.

The early lives of George W. Price, Sr., and Jr., like those of many artisans born in slavery, have not been fully documented. One of the earliest references to Price, Sr., appears in federal records concerning proposed repairs to the United States Custom House of 1843 (see John S. Norris). On March 9, 1854, George W. Price [Sr.] submitted a proposal to make repairs to the plasterwork in the Custom House and to “replace the ornaments which has fallen from the center flower and other parts of the court room.” If indeed Price was enslaved at this time—which apparently he was—this is a remarkable example of a bondsman not only operating as a free man but proposing to make a contract with the federal government. Wilmington slaves, especially artisans, often operated essentially as free men, including taking contracts and hiring workmen, but this would have been an unusual case nonetheless. George Price, Sr., was also a popular local lay minister in the Methodist church both before and after the Civil War. In recalling the artisans of color in antebellum Wilmington, former slave John H. Jackson pointed to their work on the City Hall-Thalian Hall: “I remember all the bricklayers, they was all colored. The man that plastered the City Hall was named George Price, he plastered it inside. The men that plastered the City Hall outside and put those colum’s up in the front, their names was Robert Finey and William Finey, they both was colored. . . . they was slaves, most all the fine work ‘round Wilmington was done by slaves. They called ‘em artisans.”

So too, concerning the building of the elaborate Bellamy Mansion, the first owner’s son, John D. Bellamy, Jr., remembered, “Even the delicate and ornamental cornice work of plaster of Paris in the rooms was done by Negro mechanics.” He listed the names of the artisans he recalled: “Howes, Artises, Prices, Sadgwars, and Kelloggs were also employed in the work.” When the Bellamy House was built on the eve of the Civil War, George Price, Sr., was a mature artisan, while George, Jr., aged about eighteen, was old enough to have mastered skills and assisted his father. At the Bellamy Mansion, the Prices probably worked alongside another enslaved plasterer, William Benjamin Gould. Only a few years later, in 1862 when the Union fleet was blockading Wilmington and a yellow fever epidemic was ravaging the city, two young plasterers, William B. Gould and George Price, Jr., slipped away in the dark of a September night, taking a small boat with six other slaves and making their way to a Union ship, the U.S.S. Cambridge. They boarded the ship and signed on with the Union. The ship log noted the “contraband” Price’s owner as William C. Benticott (a large slaveholder). Gould noted in his diary that on November 10, 1862, when their ship was in Beaufort, North Carolina, “George P—-e” went ashore with others and then disappeared along with three other men. (Gould continued to correspond with Price for several years after this.)

George Price, Jr., was in Beaufort and New Bern during much of the war, joining other “contrabands” and others who gathered behind Union lines in the captured towns. There Price entered into political activities with other black leaders such as the charismatic Abraham Galloway. In the summer of 1865, Price and Galloway were among the leaders at a “mass meeting” in New Bern to call for a freedmen’s convention. And that fall, Price was one of several men representing New Bern and Craven County at the Freedmen’s Convention held in Raleigh. But he soon returned to the Wilmington area, as did Galloway, and both men represented that community thereafter.

In postwar Wilmington, both Prices took important roles in civic life while still pursing their trades. As early as April 27, 1865, when black Wilmingtonians held the Lincoln Memorial Procession in memory of the slain president, George W. Price (Sr. or Jr.) served as “Marshal on Horseback,” leading a half-mile long throng of mourners through the streets of the city—an event vital in organizing black political leadership in the city.

Price, Sr., continued his ministry and engaged regularly in civic affairs. In the census of 1870 he was listed as a Methodist minister, aged 60, living on 6th Street with his wife, Eliza, aged 50, and children William, Caroline, Fanny, and David. In 1880 he was still listed as a minister, with a younger wife, Ann, aged 47. According to A. M. E. Zion leader James Walker Hood, George Price was a minister at St. Luke’s A. M. E. Zion Church (Christian Chapel) in Wilmington but later left the denomination—apparently becoming a Presbyterian, for he was buried from Wilmington’s Chestnut Street Presbyterian Church. He was a member of Giblem Masonic Lodge and in 1875 he won a prize for an improved beehive at the first black Industrial Fair. He died in Charlotte in 1881. He and his first wife, Eliza (1815-1874), were buried in Wilmington’s Pine Forest Cemetery.

George W. Price, Jr., who had been in the thick of political activity in New Bern during the war, promptly became a prominent leader in Wilmington politics and in the state Republican Party. According to W. McKee Evans, the younger man’s support from his father helped bolster his political career, and his association with Abraham Galloway surely benefited him as well. George, Jr., was listed in the United States census in 1870 as a “member of the legislature,” aged 26, residing with his wife, Amelia, 24, just two doors away from his father’s household. In 1880 he still lived within a few doors of his father and headed a large household that included his second wife Sophia, 33, and their children William and Fanny, plus Sophia’s father David Sadgwar, 63, and her sister Fanny and brothers James and George, both carpenters. Price gave his occupation as “Customs House Clerk,” a federal appointment. He was elected to the city’s Board of Aldermen in 1868, served in the state House of Representatives in 1869-1870 along with several other black Republicans, and in 1870-1872, he was one of the few black men in the state Senate. On the local scene, he was a city marshal and a justice of the peace beginning in 1874.

Indicative of his position in the community, Price frequently appeared as the featured speaker at public events such as Emancipation Day and Memorial Day, as well as giving numerous speeches on racial and educational issues. In 1885, he gave an invited talk to the state legislature about “The Negro of the South.” In 1881, when Republicans held a convention in Raleigh, Price was selected to head a delegation to consult with President James Garfield in Washington concerning distribution of federal offices in the state—an important source of remunerative black employment. In 1887 he had a federal appointment as United States Customs Inspector at Wilmington. He was a Mason and a consistent promoter of freedmen’s causes. George W. Price, Jr., continued to practice his trade as well as participating in political life. The Wilmington Star of July 26, 1871, commented favorably on the handsome parlor of Mr. R. P. Barry’s house, in which the ceiling was “ornamented with plaster of paris cornice work,” which was “the handiwork of George W. Price, the colored Senator from this county.” In the 1890s, he advertised as a contractor and builder, plasterer and “castor,” and a manufacturer of “Ornamental Decorations for Cornicing and Ceilings, Centre Pieces and Stucco Work.”

By the late 1890s, city directories no longer listed Price at his old profession. How the violent political and racial upheaval in the city in 1898 affected Price and his family is unknown, but the events and their aftermath, which included white strictures against black workmen, probably cut into his business. He was listed as an auctioneer late in the decade, and by 1900 was owner of the “Brooklyn Jobbing House,” where he bought and sold secondhand furniture and other items. His wife, Sophie Sadgwar, had died on February 21, 1898. Price died at age 56 when he was hit by a train in the local train yard on October 22, 1901. His funeral, like that of his father, was held at Chestnut Street Presbyterian Church, and he was buried, as were his parents and other family members, in Pine Forest Cemetery.