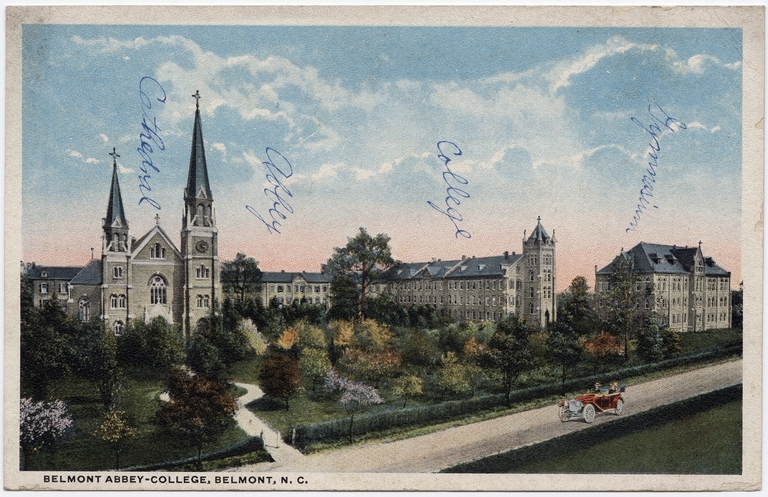 Michael Joseph Vincent McInerney (March 18, 1877-March 3, 1963), architect and designer, was a Benedictine monk and Roman Catholic priest at Belmont Abbey in Gaston County, North Carolina. Beginning with his design for St. Leo Hall (1906) at the Abbey, he developed a nationally important architectural practice that encompassed scores of Catholic churches, schools, hospitals, and other structures. In North Carolina, in addition to his work in Belmont, he planned religious buildings in communities from Asheville to Kinston. Typically built of brick, sometimes in local stone, they combine architectural distinction with the modest size and simple forms suited to the budgets of the state’s small Catholic parishes of the early to mid-20th century.

Born in Lockhaven, Pennsylvania, to Irish immigrant parents, McInerney attended parochial schools in McKeesport and Pittsburgh and worked as an assistant to his father, a stone contractor. At age fifteen, he was accepted as an apprentice architect by W. A. Thomas in Pittsburgh. Augmenting his training with college courses at Duquesne, he advanced quickly and became a junior partner in Thomas’s firm.

In 1900, McInerney moved to North Carolina, intending to enrich his art by studying classics at what is now Belmont Abbey College. Soon after his arrival, a fire destroyed most of the college on May 19, 1900, and proved to be a turning point in his life and work. McInerney volunteered to be architect for the reconstruction of present Robert Lee Stowe Hall, beginning a long career as architect for Catholic buildings across the country. Edified during this project by the Abbey’s Benedictine monks, McInerney joined the monastery in 1902, professed the monastic vows in 1903, and was ordained a priest in 1907.

As a monk-architect, McInerney focused his art almost exclusively on Catholic projects. His designs were primarily institutional—approximately 200 Catholic churches, 27 hospitals, 18 convents or monasteries, 10 gymnasia, and others—but they were particularized and colored by his personal investment in the life and values of monasticism. Exterior ornamentation was usually intrinsic rather than appended; his interiors were characteristically austere. McInerney customarily signed his building with a long-stemmed cross, sometimes in bold relief as at Haid Gymnasium at Belmont, and at other times subtly inscribed in the brickwork, as at Linton Hall Academy near Bristow, Virginia.

In his early work, Father McInerney developed a variation on the German Gothic Revival that acquired the popular designation “American Benedictine” from its frequent use by monasteries. This style’s principal statement is found in his St. Leo Hall at Belmont Abbey College, a structure of imposing beauty and simplicity. Its box shape gains special distinction from the projection of the roof, the texturing of the brickwork, and the shapes and sizes of the windows. This building helped establish the young monk-priest as a leading religious architect. He continued to design buildings at the Abbey and College, including such modest structures as a brick well house as well as more substantial buildings.

The poverty of the Catholic Church in the South required that most of McInerney’s work in the Carolinas centered on small chapels. He also planned health facilities in Charlotte and Asheville for the Sisters of Mercy, also headquartered in Belmont. By the 1920s he had a national clientele, and most of his largest projects were those outside of North Carolina. Occasionally notices of his designs appeared along with those of other architects in the Manufacturers’ Record, where he was typically identified as “Father Michael of Belmont Abbey.”

In the middle period of his architectural career (1930-1945), McInerney shifted his emphasis from brick to stone and from Gothic Revival to a striking conception of Romanesque arches imposed on sturdy, classically simple façccedil;ades. This proved the most prolific and artistically fruitful period of his career. His rectories for St. Benedict (1932) and St. Francis (1934) parishes in Baltimore, for example, were vivid expressions of the maturity and power of his art. Working extensively in Maryland, West Virginia, and the Carolinas, the priest earned architectural fees that kept his abbey and its college solvent during the Great Depression. He also designed chalices, candelabra, sanctuary lamps, pews, and other furnishings as well as grave markers.

McInerney’s final period (1945-1963) reversed his earlier intentions. With a new economy of exterior line, and a taste for flat roofs and squared towers, he emphasized rather than disguised the box form. St. Michael Catholic Church and Rectory (Gastonia, 1957) is characteristic of this period. The most exquisite design of his last years, St. Michael Catholic Church in Wheeling, West Virginia (1952), was untypical of this period, for here McInerney returned to the Gothic aspirations of his earliest days, and created a strikingly unornamented interior whose art and expression proceeded entirely from its structural design, not decorations.

Father McInerney published many articles on church architecture, hospital architecture, the use of stained glass, and other topics. He served on the faculty of Belmont Abbey College from 1903 on, and in summers taught at St. Louis University in Missouri. The Stained Glass Association of America and the North Carolina Chapter of the American Institute of Architects granted him honorary memberships. In 1959, St. Vincent College of Pennsylvania awarded McInerney its doctorate (honoris causa) in recognition of his more than five hundred buildings, his “devotion to ecclesiastical art, the sacrifices and labors of the priest and monk, and the economy of church funds [secured through] the endeavors of his artistic and architectural talents.” He is interred in the monastic cemetery at Belmont Abbey.

Editor’s note: McInerney kept no records of his buildings, and the following list of his works was constructed by Dom Paschal Baumstein mostly from archival sources at Belmont Abbey. Baumstein’s research identifies as McInerney’s work several Catholic churches previously featured in published architectural surveys but without attribution to the architect. The list represents all the projects in North Carolina for which Father Baumstein found references, including several for which precise dates, addresses, and statuses have yet to be obtained. Photographs of some of McInerney’s designs may be found in Miriam Miller’s A History of the Early Years of the Roman Catholic Dioceses of Charlotte (1984), and in Paschal Baumstein, The Art of Michael McInerney (1992). The dramatic growth of the Catholic population in North Carolina that began in the late 20th century, due to immigration from northern states and from Latin and South America, has encouraged many parishes to leave or raze the small churches designed by Father McInerny, which served for many years, and to build large new complexes on new sites. Updated information is sought for all properties.