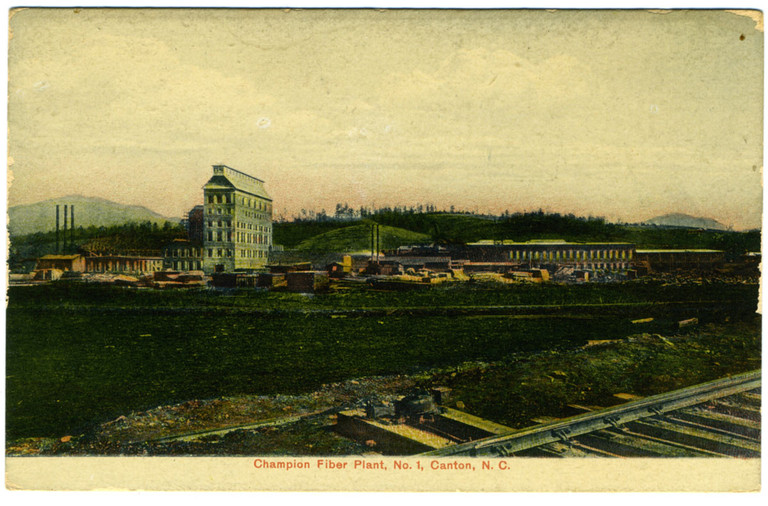 Furness was born in the industrial city of Manchester, England to a father whose craft was listed as “joiner carpenter” in the census of 1901. He was one of seven brothers, two of whom preceded him into the craft of brick masonry. The three initiated their own construction business, but sustaining work proved elusive. Tommie Furness then resolved to emigrate to South Africa. In 1903, however, he came to the United States for an interim stay, and in New York City he heard of work available with the Champion Fibre Company of Hamilton, Ohio. The firm was just then starting construction on a large wood-pulp processing facility in Canton, North Carolina. Located in the heavily forested North Carolina mountains where the Western North Carolina Railroad crossed the Pigeon River, Canton offered ready access to the timber, fresh, swift-moving water, railroad connections, and willing local labor. All of these advantages converged to make the plant an immediate financial success. Champion planned and built one of the largest pulp mills in the region, and by 1930 it was the largest and most modern pulp- and paper-manufacturing facility in the world.

As a Champion employee, Furness traveled throughout the South, using his own judgment to acquire and ship the quantities of brick and mortar necessary to build the factory buildings. When construction began in 1906, Furness, then only 24 years old, became master mason in charge of all brickwork at the mill. Although the pulp factory was completed and ready for operation in 1908, Furness stayed on in charge of construction and maintenance for the rapidly growing and changing facility. By 1910 he had married Leola, a North Carolina mountain girl, and within ten years the couple had become parents to four children: Mary, Margaret, Frederick and Thomas. James and Ruth arrived to complete the family a few years later. Though considerably advanced in the hierarchy of Champion’s management, Furness was still, like most of his colleagues, renting a house from his employer in a part of Canton known as “Fibreville Hill.”