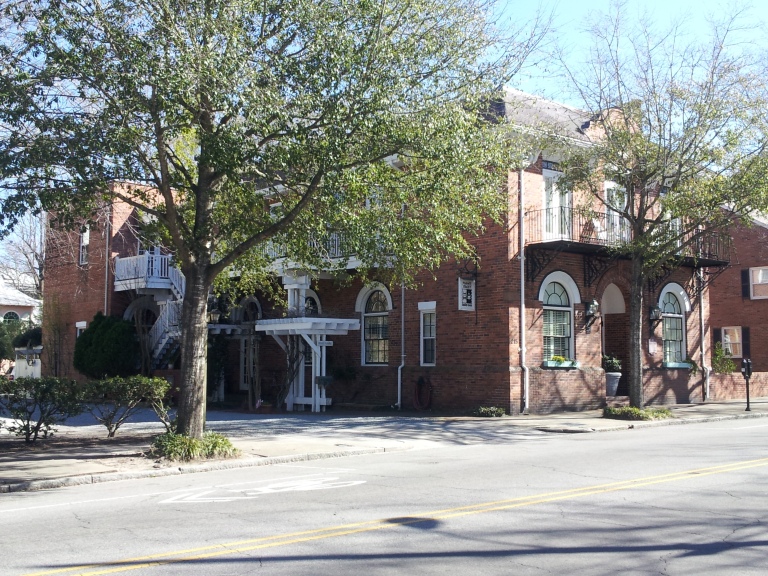 James Borden Lynch (January 29, 1883-November 17, 1965), a native of Wilmington, N. C., practiced architecture in his home city for many years, planning civic, residential, and religious buildings on his own and in partnership with other architects including James F. Gause, Jr. and Osborne G. Foard.

The History of North Carolina: North Carolina Biography (1919) and the Wilmington Dispatch of December 31, 1915 described Lynch’s early years. He was born to Adolphus B. and Mary Bordon Lynch, “well known” citizens of Wilmington, and was educated in local schools. After working as a draftsman in Wilmington for a short period, he “entered the Agricultural and Mechanical College [present North Carolina State University], at Raleigh, and completed the full architectural course with distinction and credit.” After graduating, he worked in various architectural offices “from New York City to Tampa, Florida,” and in 1915 returned to Wilmington to begin a private architectural practice. In 1910 he was identified as an architect, living with his parents and siblings in Wilmington in 1910. In 1916 he married Carlotta Mugge of Wilmington.

Lynch began his practice in Wilmington at a time of growth, especially in the city’s expanding suburbs. His first commission noted in the local newspaper was for a Gothic Revival-style Methodist church at Winter Park, not far from Wilmington (Wilmington Morning Star, December 15, 1915). Other notable works completed by the end of 1915 were the Mugge House in the Winoca Terrace development and the C. R. Humphreys House in the Carolina Heights suburb. He also had in prospect houses at Carolina Heights for C. C. Brown and Henry Taylor, a new station for the Tidewater Power Company at Delgado, and work at the Cape Fear Country Club (Wilmington Dispatch, December 31, 1915).

The December 31, 1915, Wilmington Dispatch also reported that “two of Wilmington’s most prominent architects”—James B. Lynch and James Gause—had formed a partnership and planned to occupy Gause’s offices (#29 and #30) in the Odd Fellows Building. Gause and Lynch soon gained a commission as superintending architects for the Church of the Covenant (now St. Andrews Presbyterian Church of the Covenant), built from designs by New York architect Kenneth M. Murchison, Jr. With funding from the Sprunt family, the newly formed Presbyterian congregation erected a large and beautifully finished stone church in Gothic Revival style on a prominent site on Market Street; its progress was reported in detail by the Wilmington newspapers. The Wilmington Dispatch of July 19, 1916 noted that ground would be broken on August 1, as “announced in the offices of Messrs. Gause & Lynch, architects, who are associated with Mr. Kenneth M. Murchison, architect of New York City, in the construction.” The contract for construction went to the local firm of Rhodes and Underwood.

Gause and Lynch also took commissions for such prestigious residences as the Georgian Revival style Bluethenthal House (1917) in the elegant 1700 block of Market Street and the Thomas H. Wright House (1917) in the Winoca Terrace suburb developed by Wright’s family in the 1910s. Sometimes local newspapers cited a project to only one member of the partnership; whether they operated independently at times is not clear.

Gause and Lynch’s partnership was short lived: the Wilmington Star of April 20, 1917, noted that the two had dissolved their firm when Lynch resigned in anticipation of entering the war effort. He served as captain of the 2nd Company, C. A. C., North Carolina National Guard, and in various capacities during the war (Wilmington Morning Star, February 5, 1922).

After the war, Lynch came home to continue his architectural practice, publishing frequent advertisements for his office in Wilmington newspapers beginning in mid-1919. Among his projects was a hospital at the southeast corner of 3rd and Grace Streets for Drs. Ernest S. Bulluck and R. H. Davis, to cost about $100,000 (Wilmington Morning Star, July 28, 1920). In 1922, the Wilmington Morning Star of April 15 cited Lynch as architect for the new Behrends Building for Samuel Behrends on Front Street downtown, a 3-story building—”practically fireproof”—to replace a structure that had burned. One of Lynch’s best-known buildings in downtown Wilmington is the Salvation Army Buildin (1923-1924) on Front Street, a boldly detailed and eclectic 2-story brick edifice.

In the mid-1920s Lynch formed a lasting architectural partnership with Osborne G. Foard of Wilmington. The firm planned several projects for the city of Wilmington including housing projects and fire stations. In 1923, the Wilmington Star of May 22 and the Wilmington News of February 12 reported on the opening of the “white front garage” of Macmillan and Cameron at 115 N. 3rd St., designed by Lynch: some 2,000 people attended the formal opening with “Green’s Sensation Five orchestra enlivening the evening with peppy jazz tunes.” Built early in the Great Depression, Fire Station No.5 (1930-1931) on Wrightsville Ave. was funded as a construction project to help the local employment situation. Among the firm’s later works was the design for a new church—or an extensive renovation—for St. Paul’s Episcopal Church in Wilmington, which was built along traditional Gothic Revival lines for a century-old congregation.