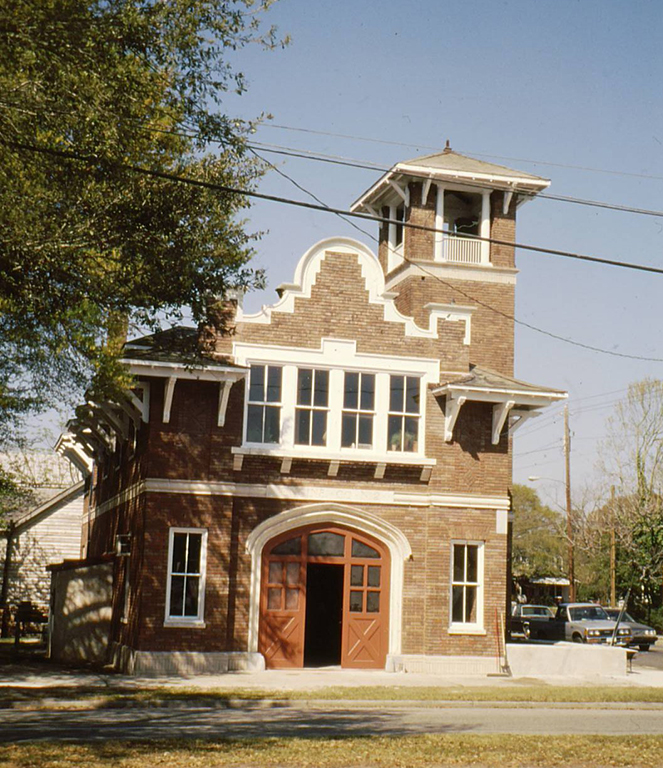 James F. (Franklyn) Gause, Jr. (June 15, 1885-June 2, 1922) was a prominent architect in his native city of Wilmington during the early 20th century. On his own and during a brief partnership with James B. Lynch, he designed a range of building types including public edifices, churches, schools, and residences in the popular styles of the day.

James was the son of James F. Gause, Sr. (d. 1917), and Frances Caroline (Fannie) Jones Gause (d. 1912), who married in Wilmington in 1878. Whether Gause had any formal education in architecture is unknown; he likely obtained his professional training by working in architectural offices as a draftsman and assistant architect. He became part of a strong community of professional architects in early 20th century Wilmington, several of whom had come from other locations. Like many of them, he planned some downtown projects but also found a strong clientele among citizens and institutions who wanted new buildings in the ever expanding suburbs of the city.

Reports in Wilmington newspapers tracked the native son’s peripatetic career. On March 30, 1907, the Wilmington Star noted that Gause, who had “been with Mr. Carl B. Cooper, the architect, for several years,” was about to leave for a “more lucrative position” in Montgomery, Alabama. (Shortly after this, the Star announced on June 9, 1907, that Carl B. Cooper had joined architect Charles McMillen in the firm of McMillen and Cooper.) The following year, the Star reported on September 23, 1908, that Gause, “a popular young draughtsman and architectural engineer,” who was back (or still) in Wilmington, was leaving that day for Ferguson, S. C., to work for Raymond Humphreys on railroad projects. In 1910, the Star noted on December 24 that Gause was “doing a successful business as an architect at Waynesville, N. C.” He soon returned to Wilmington, where by 1912 he had planned “improvements” to the city market house. The Wilmington Star of August 20, 1913, reported that on August 19 the “prominent young architect of Wilmington” and Esther Virginia Edson were married at the home of her parents, Captain and Mrs. Edward Edson, 957 East 10th Street, in Brooklyn, New York. The newlyweds made their home in Wilmington at 101 North 7th Street. Gause gained several local commissions, including the Fire Station No. 2 and the Delgado School in the Delgado mill village near Wilmington.

On December 31, 1915, the Wilmington Dispatch reported that “two of Wilmington’s most prominent architects”—Gause and James B. Lynch—had formed a partnership and planned to occupy Gause’s offices (#29 and 30) in the Odd Fellows Building. The newspaper listed Gause’s previous works in the Wilmington area, including schools, civic buildings, health facilities, and residences in the city and its environs, plus two hotels in or near Waynesville and several (unnamed) mills in the western part of the state. The article cited several projects about which little is yet known, including the Greenmeyer House and the Chadwick House in Sunset Park, the B. F. Keith House at Still Bluff and the W. L. Parsley House at Masonboro Sound, an area beloved by Wilmingtonians for summer getaways in comfortable and healthful settings. Also cited were the Winter Park Presbyterian Church in a new suburban community and a Red Cross Tubercular Sanitarium on the Castle Haynes Road.

Shortly after joining forces, Gause and Lynch gained a commission as superintending architects for the large, prominent, and costly Church of the Covenant (now St. Andrews Presbyterian Church of the Covenant) from designs by New York architect Kenneth M. Murchison, Jr.. With funding from the Sprunt family, the newly formed Presbyterian congregation erected a large and beautifully finished stone church in Gothic Revival style on a prominent site on Market Street; its progress was reported in detail by the Wilmington newspapers from 1915 through its dedication in 1918. The Wilmington Dispatch of July 19, 1916 noted that ground would be broken on August 1, as “announced in the offices of Messrs. Gause & Lynch, architects, who are associated with Mr. Kennenth M. Murchison, architect of New York City, in the construction.” The contract for construction went to the local firm of Rhodes and Underwood. Gause and Lynch also took commissions for such prestigious residences as the Georgian Revival style Bluethenthal House (1917) in the 1700 block of Market Street and the Thomas H. Wright House (1917) in the Winoca Terrace suburb developed by the Wright family in the 1910s.

But the partnership was short lived. The Wilmington Star of April 20, 1917, noted that the two had dissolved their firm when Lynch resigned in anticipation of entering the U. S. Army. Later that year, Gause left for Sheffield, Alabama, to work for the J. G. White Engineering Corporation in planning a government-sponsored nitrate plant. He was subsequently transferred to the company’s New York office and planned projects in Massachusetts and Canada.

Gause returned to Wilmington in 1919 and opened an office in the Odd Fellows Building. For a time, as recorded in the U. S. Census of 1920, he and his wife resided with her parents in Brooklyn, but he resumed his practice in Wilmington early in 1920 with offices in the Murchison Building. He gained commissions for Immanuel Presbyterian Church (Wilmington Dispatch, Aug. 3, 1920) and served as supervising architect for the Kenan Memorial Building, a Sunday school building for the Church of the Covenant, designed by architect Kenneth M. Murchison of New York in “modern Gothic architecture” to harmonize with the existing church (Wilmington Star, Feb. 6, 1921).

In the early 1920s the young architect Leslie N. Boney, Sr. was working for Gause as a draftsman involved in planning the Cape Fear Country Club in Wilmington and at least seven elementary and high schools across the state. Among these were New Bern’s Riverside Elementary School and Ghent Elementary School, located in new streetcar suburbs and credited as being the first “fire resistant” elementary schools in eastern North Carolina. The Wilmington Morning Star of April 9, 1922, reported that the Cape Fear Country Club, designed by Gause, was to be among the handsomest and best equipped country clubs in the Carolinas. These projects were underway when Gause was stricken ill in May and died in June, 1922, and Boney saw to their completion.

Gause was also active in the architectural profession, attending a meeting of the North Carolina Architectural Association in Charlotte in 1916 as well as a meeting of the North Carolina Chapter of the American Institute of Architects (Wilmington Dispatch, January 1, 1916). In 1917 and 1920 he was appointed to the state board of architectural examination and registration (Wilmington Star, Sept. 15, 1920). He was an advocate of fireproof construction and as reported in the Wilmington Star of February 6, 1922, served on a local committee to promote that method in downtown Wilmington after destructive fires there.

Gause died at age thirty-seven at James Walker Memorial Hospital in Wilmington, following surgery for a stomach ailment. The Wilmington Morning Star of June 3 described him as a leading architect in the city and the state, and the Winston-Salem Twin City Sentinel of June 3, 1922, said he was “widely known” in the South. He was survived by his widow and his brother, Thomas J. Gause. He was buried at Wilmington’s Oakdale Cemetery.