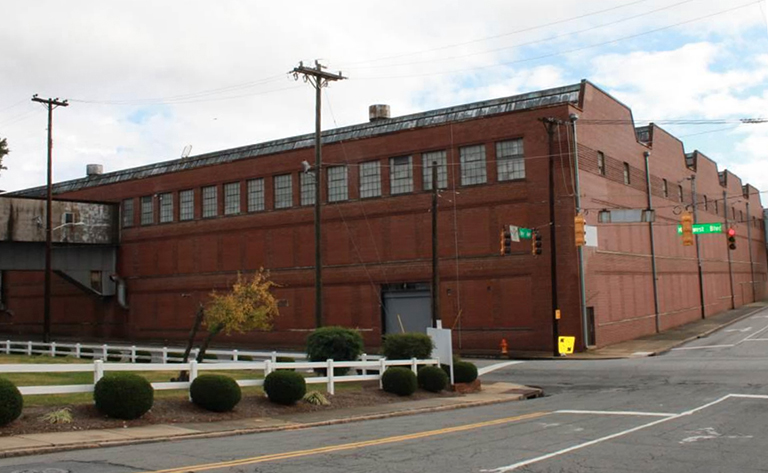 Albert Kahn (1869-1942), who is generally ranked as America’s most important designer of industrial architecture in the first half of the 20th century, planned facilities across the nation, including at least six buildings in North Carolina. According to the finding guide to the Albert Kahn Papers at the University of Michigan, Kahn “revolutionized the health and safety conditions of early twentieth-century factories and worked closely with Henry Ford to implement his vision of the assembly line at the Highland Park and river Rouge automobile plants. Kahn pioneered the use of reinforced concrete, non-intrusive steel structures, natural ventilation and glass building skins to respond to the changing functional needs of the American factory,” and his work produced “a new industrial architecture, which inspired the development of European Modernism.” He built over 2000 projects.

Although Kahn is widely known nationally and internationally, his North Carolina work has been little recognized. One of his known North Carolina buildings has been lost, but five others still stand, some of them changed over the years, others notably intact, including his 1924 Ford Motor Company Plant in Charlotte and his 1938-1939 Hanes Hosiery Mills, Ivy Avenue Plant in Winston-Salem which fully exemplify his approach to factory design. Further research in the Albert Kahn papers may provide further information on these and any other North Carolina works.

The following biographical paragraph is drawn from the finding guide cited above. Albert Kahn was born in Rhaunen, Germany in 1869, the oldest of eight children of Joseph and Rosalie Kahn; his father was an itinerant teacher and rabbi. After several years in Luxembourg, Joseph came to the United States in 1879 and was followed by his wife and six of the children in 1880. The family lived in Baltimore. The artistically talented son Albert studied drawing but left school after the 7th grade to help support his family, including working as an office boy for an architectural firm. In 1885 he went to work for the Detroit architectural firm Mason and Rice, who helped him develop his skills. He spent ten years with that firm, traveled to Europe and became friends with architect Henry Bacon, Jr., and gained a promotion in Mason’s firm when he returned. In 1895 Kahn formed a new firm with two colleagues, and by 1903 had formed another association with Ernest Wilby. In that year, Albert’s brother Julius, an engineer, joined the firm and began their important collaboration on the use of reinforced concrete and other innovations.

Beginning in 1903, Albert Kahn’s innovative automobile plants for Packard, Pierce-Arrow, Chrysler, and especially the Ford Motor Company helped define the look of industrial America and became icons for architects in the International style. In these buildings were produced some of the most magnificent American automobiles of the classic age of automobile design. He continued to gain commissions including 150 major buildings for General Motors and a large number for Chrysler. By 1920 his office had a staff of 400 and by 1939, 600. Although most of the firm’s projects were in the United States, the firm designed a large number of industrial buildings including tractor factories for the Soviet Union. The Kahn operation, known for its full set of services, “could provide the full range of design/build functions in-house,” which made construction “more efficient and less costly for clients.” At the time of his death in 1942, Kahn’s firm had joined the American war effort.

Kahn’s factory buildings often featured one-story plans designed around the needs of the assembly line, and all were characterized by careful marshalling of natural light through clerestory or sawtooth roofs and vast expanses of glass window-walls. Besides industrial architecture, Kahn also carried out many notable institutional, commercial, and residential commissions. He became the favorite architect of the automotive titans of Detroit. He designed Edsel Ford’s mansion, many buildings on the campus of the University of Michigan, and the General Motors and Fisher skyscrapers in downtown Detroit.

Kahn’s work in North Carolina began in the 1920s with automotive facilities in Charlotte, a city then taking its place as the major wholesaling and distribution center of North and South Carolina as facilitated by its excellent rail connections. Kahn’s two Charlotte buildings of 1924 presented highly visible statements of the modernist esthetic in the “Queen City”. By the time his firm undertook projects in North Carolina, the staff was a large one. Further research may indicate the designers directly involved in these projects, but in any case they carried out Kahn’s approach to industrial architecture.

The large, 4-story downtown headquarters of Buick distributor C. C. Coddington (C. C. Coddington Building) had showrooms in the first story and offices above; its structure exemplified an early use of all-concrete construction. Largely intact is the sprawling assembly complex of the Ford Motor Company Plant, which displays characteristic Kahn elements of factory architecture, with a plan designed around the assembly process, skylit work spaces, and Art Deco motifs.

Two more North Carolina projects in the next decade were probably arranged directly from Detroit. Kahn’s show room and garage for the Chipley Motor Company (1928) which formerly stood in downtown Raleigh was part of his ongoing work for the Packard company. His relatively modest Chevrolet Parts Warehouse (1935) in Charlotte was commissioned by General Motors’ real estate arm, Argonaut Realty. It is still standing, somewhat altered, and still has “Chevrolet” emblazoned on its big red brick smokestack. The large banks of side windows have been covered, but may still be there under the covering.

By the late 1930s, Kahn’s office was the busiest designer of industrial buildings in America. In 1938 the Hanes Hosiery Company hired Kahn to design a new Hanes Hosiery Finishing Mill in Winston-Salem. An important and remarkably intact example of Kahn’s construction philosophy, it displays the special provisions for natural light required for workers handling the delicate and exacting nylon (later rayon). The imposing 3-story brick structure 27 bays long features extensive use of steel-sash center-pivoting windows and roof monitors designed to shed natural light on the spaces below.

Three years later, in one of many projects to support the United States’ war effort, Kahn’s office took on a large project on the outskirts of Burlington, N. C., upfitting a Burlington Mills rayon factory to turn out bombers for Fairchild Aircraft. This was part of a national program to use existing industrial plants for defense projects. The plans for the Fairchild Engine and Airplane Corporation was among the last that Kahn himself might have overseen, for he died in 1942. The building was put into use in 1943.

In recent years, two of Kahn’s North Carolina works—the Fairchild complex and the Hanes Finishing Plant—have gained recognition by listing in the National Register of Historic Places, joining many others so designated across the country. With growing attention to 20th century industrial architecture in the state and nation, preservationists hope that this major industrial architect’s other works in the state will attract attention and successful preservation efforts.