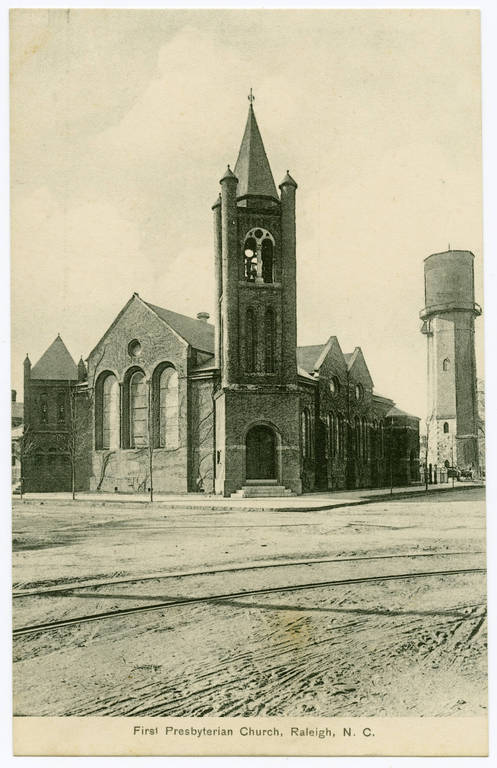 Charles Emmet (Emmett) Cassell (1838-1916) was a Virginia-born Baltimore architect whose only known work in North Carolina is Raleigh’s robustly designed and prominently located First Presbyterian Church (1897-1900), considered one of the state’s finest churches of its era.

Cassell was born in Portsmouth, Virginia, a son of Charles E. and Sarah W. Cassell. After graduation from the University of Virginia, he served in the engineers corps in the Confederate army, then traveled to South America and served in the Chilean Navy. Upon his return to the United States, he practiced architecture in St. Louis but moved to Baltimore in about 1868. There he practiced his profession with distinction for the rest of his career, was a founding member of the Baltimore Chapter of the AIA in 1870, and became a Fellow by 1905. He was associated with his nephew, Charles M. Cassell of Norfolk, Virginia, as Cassell and Cassell, from the late 1880s until about 1900. He also practiced with his son, John, as Charles E. Cassell nad son from 1905 until the younger man’s death of influenza about 1909.

Charles E. Cassell’s architectural work encompassed a variety of building types and both round-arched and neoclassical styles. How the Raleigh commission came about is not known, but during the late 19th century business between Baltimore and North Carolinians was extensive, and a number of projects in the state involved Baltimore architects such as Edmund George Lind and Charles L. Carson.

The First Presbyterian Church congregation, the oldest in the capital, was organized in 1816 and met in the State House until completing a brick church in 1818 at the corner of Salisbury and Morgan streets facing Union Square. The other three corners likewise became the sites of Baptist and Episcopal churches. Architect Adolphus Gustavus Bauer had supplied a design for a new church in the early 1890s, but likely due to the economic problems of the mid-1890s and Bauer’s health and personal problems it was not executed.

In 1897, the Raleigh Daily Tribune of March 5 reported that construction was about to begin on a “splendid church edifice” designed by architect Charles E. Cassell of Baltimore. Charles Pearson was to be supervising architect and George W. Waring of Columbia, S. C. (described as builder of the administration building at Shaw University) was the contractor. The Tribune noted that the church was to have a “composite” design and to be built of North Carolina materials including red brick and brownstone trim. The cornerstone was laid in 1898 and the church was dedicated in 1900. Cassell’s design takes full advantage of the corner site, with broad gables meeting at the boldly composed entrance tower. Upon its completion, the church was described in laudatory detail in the Raleigh Morning Post of April 10, 1900, which called special attention to the three “immense brick arches” that defined the sanctuary as well as the use of North Carolina pine throughout the interior and the fine stained glass windows. The writer cited Cassell’s “Romanesque” design as unique among the city’s churches and pleasing to any “admirer of picturesque construction.” Charles Emmet (sic) Cassell was buried in the Cedar Grove Cemetery in Portsmouth, Virginia, and his marker gives his dates as April 26, 1838 to August 29, 1916. (Some accounts date his birth as ca. 1842.)