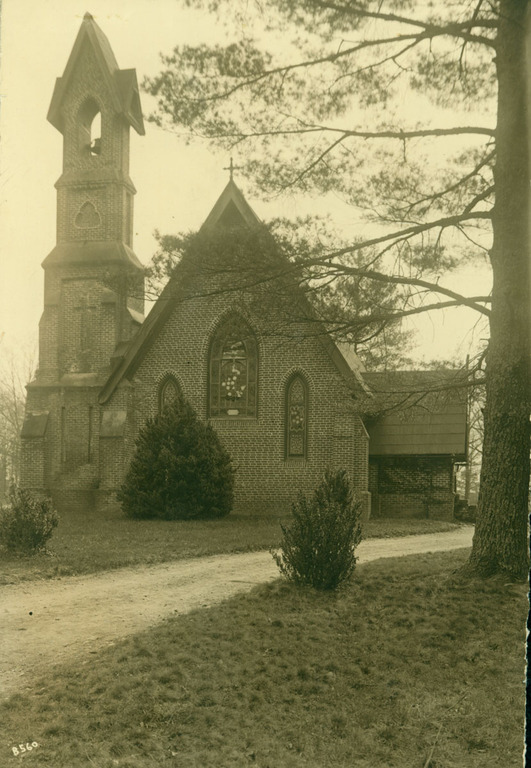 Scots-born architect S. (Samuel) Grant Alexander (January 22, 1875-January 21, 1953), came to Asheville from Scotland for his health in 1923, opened his architectural firm in that city in 1924 and practiced there until his death. He had received his education and training in his native Scotland and worked there for several years in restoring and expanding historic castles and other buildings before arriving in Asheville. Among his best known projects in western North Carolina are Stratford Towers, a manorial residence in Asheville’s Lake View Park, and the rebuilding of the antebellum, Gothic Revival style Calvary Episcopal Church in Fletcher after its destruction by fire.

Alexander was born in Inverness, Scotland, the son of Samuel Grant and Jesse A. Nelson Alexander. He was articled (apprenticed) to architect Duncan Cameron of Inverness in 1892 and with Cameron oversaw additions to Glenfinnan House there. He entered the office of architect William Laidlaw Carruthers as an assistant in 1896 and in 1901 formed a partnership with him as W.L. Carruthers and Alexander. Carruthers was known for his large Arts and Crafts and Tudor Revival residences, and the firm undertook numerous restoration projects including the rebuilding of Dalcross Castle. Alexander was admitted to the LRIBA (Licentiate of the Royal Institute of British Architects) on March 20, 1911. After Carruthers’s death in 1914, Alexander continued the practice with Carruthers’s son, Robert (Roy) Ballanyne Carruthers until 1923. In that year, Alexander along with his wife, Sarah Marguerite, whom he married in 1904, and their two children, Marguerite, aged 17, and Ludovic John Grant Alexander, aged 13, took ship on the President Roosevelt and arrived in the United States on August 4, 1923.

The Asheville Citizen of April 13, 1924, announced the opening of Alexander’s architectural office in a story headed, “Scottish Architect To Practice Here.” It noted that he had come to the city from Scotland ten months earlier: he had “an extensive practice in Scotland, but came to Asheville for his health, having heard of the climatic advantages of this section in Inverness, his native city.” In Scotland he had designed country houses and banks and “made a specialty of restoring old castles.” In his new home, he planned to “introduce some new designs and novel features, which he considered especially adapted to the requirements of life in this country.” The newspaper stated that he was working on a “handsome residence for Charles W. Leland near Skyland, and a large garage for the Automotive Sales, Inc., at the corner of Coxe and Phillips Streets.” Alexander took out an advertisement the same month in The Southern Tourist magazine, stating that he was a registered architect, a member of the American Institute of Architects and of the Royal Institute of British Architects, and a specialist in “Domestic Architecture and Street Premises.”

He joined the city’s remarkable group of architects who had come there from far and wide, and he was one of the eleven who founded the Architect’s Association of Western North Carolina. Most of the other founding members were in Asheville—Beacham and LeGrand; D. J. Dreyer; William J. East; Ronald Greene; William H. Lord; Charles N. Parker; Albert Carl Wirth; and J. S. Zimmerman—while Thomas W. Cooperwas in Black Mountain and Erle Stillwell was in Hendersonville.

Alexander bought one of the first lots at Lake View Park, lot #610, in December 1925 and in 1928 built his 2-story home there, at 38 Lakeview Road, naming it Villa Rosalia. Among his other residential designs of the 1920s are the Clyde Reed House (ca. 1925), a 3-story stone house built on 33 acres near Biltmore Village at a cost of about $100,000. In 1925 he designed the brick manorial residence called Stratford Towers, a landmark of Lake View Park, for Wallace B. Davis, then president of the Central Bank and Trust Company. In addition, as his obituary stated, he designed “some of the finer homes built here” during the 1920s.

Alexander took his son Ludovic (b. Nov. 8, 1909) as a partner in his practice, which was by then called S. Grant Alexander and Associates. Ludovic had studied architecture in Inverness in the 1920s and according to the Dictionary of Scottish Architects, “graduated from an American Architectural Course in 1929.” He was admitted to the LRIBA in 1942, proposed by his father. Despite the scarcity of architectural work during the Great Depression, the firm gained several commissions including the WPA-funded Mars Hill High School and the Monte Vista Hotel in Black Mountain, the latter constructed by a local hotel owning family who borrowed money to invest in the town’s future.

Especially noteworthy was the redesign and rebuilding of Calvary Episcopal Church in Fletcher. After the original 1859 structure burned in 1935, destroying all but the bell tower and some of the bricks from the front of the building, Alexander was chosen to design a new church on the same site that would include the original tower and restore much of the old façade while being larger in size. Construction began in October 1936 and the new church was consecrated in August, 1938.

Alexander’s commission for the Chapel of the Transfiguration at Kanuga, an Episcopal retreat center in Henderson County, came about because Episcopal Bishop Kirkman George Finlay, who presided over the consecration of Calvary, admired Alexander’s achievement there; as founder and first president of Kanuga, the bishop expressed his desire to have him design the chapel there. Although the bishop died a week after making this statement, his request was honored. Alexander was asked to agree to two stipulations—a $10,000 budget limitation and the use of timber cut from Kanuga’s property—to which he acceded. The first service was held in the uncompleted chapel in 1939, and it was consecrated on July 19, 1942.

In addition to the projects noted in the building list, various sources cite to Alexander a residence for the Beverly Hills Company, alterations to the residence of W. H. Lashley, and a Baptist church and a Presbyterian church in Marshall (the latter may be the 1950 Marshall Presbyterian Church at 165 S. Main St.). Alexander died at his home near Weaverville, N.C. He was survived by his widow, his children Marguerite Nelson Alexander and Ludovic J. Grant Alexander, and his grandson, William Ludovic Grant Alexander. Ludovic J. Grant Alexander continued to practice as an architect and lived until November 27, 1995; he was buried in Macon, Georgia.