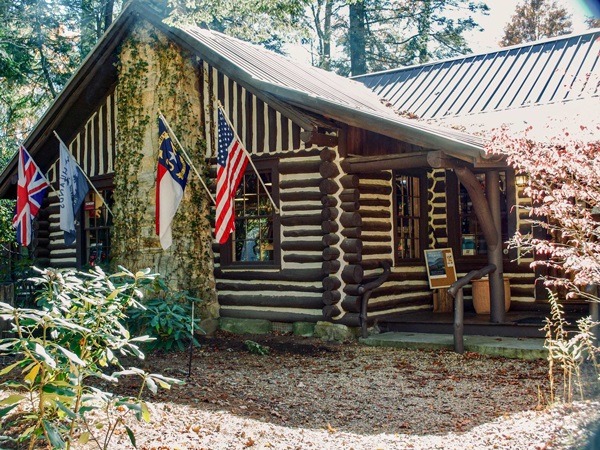 Joe Webb (1881/1882-1950) was a highly skilled and inventive carpenter and builder known for his exceptional work in the Rustic style in and around the mountain resort community of Highlands in Macon County. The quality and quantity of Webb’s imaginatively conceived and beautifully executed houses—many of them summer cottages for out-of-state clients—make his work outstanding in the state and national heritage of Rustic architecture deemed appropriate to the mountain setting. He made creative use of such local materials as chestnut bark for wall coverings and rhododendron branches for railings. As noted by architectural historian Davyd Foard Hood, the “group of important, inventive, and elegant Rustic-style log and limb houses built by Joe Webb in the 1920s and 1930s [is] unrivaled in style and date elsewhere in North Carolina’s mountain resorts.”

Joe Webb was born in Highlands, N. C., on March 16, 1881, to Nancy J. Webb, a daughter of Billy and Lucretia Webb. Joe never knew his father. Nancy married Marion Teague of Highlands ten months after Joe’s birth, and the boy grew up in that family. In December, 1905, Joe Webb married Ella Webb, a cousin. They had a son, Joseph Louis, in 1907. In 1909, they had twin daughters, who along with Ella died within weeks of their birth. In 1910 the United States census listed Joseph Webb, 28, as a widowed farmer and head of a household that included his son Joseph Louis Webb, 3, plus his half-brother Frank Teague, 20, and sister-in-law Minnie Teague, 21. In 1913 Joe Webb married Gertrude Vinson and adopted her one-year-old son, Furman. In 1920, the census listed Joe Webb as a farmer aged 35, heading a household on Dillard Rose, which comprised Gertrude, sons Louis (Joseph Louis), aged 12, and Furman, aged 7, and a niece, Caroline, 16. By 1930, listed as a 47-year-old farmer, he headed a household in Highlands that included Gertrude, the two boys, now old enough to assist Joe in his work, and Joe’s niece and nephew Julia and George Teague. According to the 1940 Census, Joe and Gertrude Webb were living in Webbmont (a development he had created, and his occupation was given as a foreman employed by the WPA (Works Progress Administration). Joe Webb was buried in the Miller Cemetery in Highlands.

Despite his accomplishments as an carpenter, Joe Webb was generally identified as a farmer in censuses, as was often the case with men who combined artisan skills with farming. For a time he worked “for wages” on various construction jobs, but he gained a reputation for his distinctive work and began to attract commissions to build cottages in his characteristic style.

Most of Webb’s cottages were built for individuals and families from other southern locales, especially from South Carolina, Georgia, and New Orleans, who spent their summers in the cool climate of Highlands. A few of his cottages served as year-round homes. The aptly named community of Highlands (elevation 4,118 feet) was established in 1875 on one of the highest plateaus in the United States, and it soon developed into a fashionable summer resort. Highlands is also known for the remarkable diversity of its plant and animal species, including rare species identified by Andre Michaux in the 18th century.

Joe Webb’s work was part of a larger architectural trend in western North Carolina. There as elsewhere in the nation, including in the Adirondacks and in national parks, architects working in a conscious Arts and Crafts esthetic designed buildings in mountain resort areas that emphasized local natural materials including rough stonework, log construction, and decorative use of branches and twigs. In western North Carolina, this mode intersected with the traditional expertise of local builders long accustomed to building in log and native stone to create buildings that represented both the survival and the revival of skills and forms. In Linville, N. C., for example, the nationally known architect Henry Bacon, who was best known for his classical designs, and other architects designed several buildings in a rustic mode that defined the community.

In Highlands, it is believed that architect James J. Baldwin of South Carolina introduced the Rustic esthetic into the community, and that Joe Webb adopted the mode and made it his trademark in houses that earned him wide popularity and lasting renown. Like many South Carolinians, Baldwin enjoyed spending summer months in the mountains of North Carolina. (Baldwin also designed a much larger building in the Rustic style, the Longview Inn, near the French Broad River in Buncombe County. It no longer stands, but a photograph survives, as well as a copy of Baldwin’s drawing of it at the Pack Memorial Library in Asheville.)

According to Davyd Foard Hood, architect, Baldwin’s design for his family’s summer home, the Baldwin-Coker House (1925), is the first known example of a Rustic style summer cottage in Highlands; Webb family tradition reports that Joe Webb was one of the carpenters who built Baldwin’s summer residence, and he adopted many of its features and made them his own. The small, 1½-story Rustic style log house served as a model for many other summer cottages in Highlands.

As at the Baldwin cottage, much of Webb’s work is distinguished by the creative use of local materials, including round logs skinned of their bark and joined with saddle notches with the ends of the logs projecting randomly beyond the corners. Projecting logs of various sizes form the rafters as well. Limb and twig railings enrich the porch and appear at other points. Rough stonework defines the chimneys and foundations. The interior continues the use of natural materials including a variety of native woods and intricate railings of branches.

“During the next fifteen years,” Hood writes, “Joe Webb was responsible for the construction of about two dozen log summer cottages whose appearance, craftsmanship, and finish mark them as products of his hand.” Tradition reports that Joe Webb worked slowly, making each cottage unique, and that he also fashioned furniture for his cabins, using many of the same materials and motifs.

Hood notes that in some cases, Webb followed plans devised by others, while in others he likely “worked with the client to produce a plan no doubt reflecting references to favored features of cottages he had earlier built for summer residences.” Evidently modeled on the Baldwin cottage is the Rustic cottage called Log Jam, built for Sidney Louis and Louise McCarty ca. 1926-1927, which features Webb’s characteristic array of limb, branch, and twig decoration inside and out. Another distinctive Rustic house, called Cabin Ben (1932) was designed by architect Rudolph E. Lee, of Clemson College for a fellow faculty member; signed blueprints for the house survive.

It is not certain when Joe Webb began work as an independent builder, but it probably occurred in the 1920s when he began a residential development called Webbmont, west of Highlands. Although the first house there was evidently a frame cottage, most of the buildings showed Webb’s rustic mode. According to Hood, “The first log house in Webbmont, and perhaps the first log house for which Joe Webb was responsible, was built ca. 1926 for Dr. Orin Otis Feaster of St. Petersburg, Florida, who acquired its lot in August 1925 as the Baldwin cottage was being completed.” Webb continued the rustic mode in the numerous cottages he built in Webbmont, where he and his wife lived for many years. Other Webb-style cottages are located nearby in the Satulah Mountain area and the Lindenwood Lakes neighborhood. Most of the Webb cottages are screened from public view by the dense foliage of the landscape, with the Highland Hiker in central Highlands one of the few readily visible from a public street.

In his book, The Work of Joe Webb (2009), author and photographer Reuben Cox traces aspects of Webb’s career gleaned from local tradition. He notes that Webb’s son and stepson Louis and Furman, “by all accounts,” worked with their father in the building trade. Cox explores Webb’s “early professional life” as a handyman at the “Wantoot” estate of South Carolinian S. Prioleau Ravenel in Horse Cove, near Highlands, as well as at Ravenel’s telephone pole insulator factory in Horse Cove; this factory work was an unusual local opportunity for wage labor. Cox suggests that his formative years working for Ravenel might have inspired Webb to enter into the real estate business, buying and selling multiple tracts in and around Highlands. Webb purchased a 114-acre parcel from Ravenel in 1918, which he subdivided and developed as Webbmont, eventually containing “nearly a dozen” Webb-built cabins. Webb’s rise in the building trade coincided with the devastating chestnut blight. Dead or blighted trees, as well as healthy trees not yet infected, were plentiful and were harvested for building, telephone poles, and tannery use. In selecting wormy chestnut for his rustic houses, Webb was drawing on the most plentiful and easily sourced building product around, and trees were often harvested on site.

Long in demand, Webb’s distinctive and appealing work has gained considerable renown in the area. Reuben Cox’s volume presents a series of evocative photographs of buildings attributed to Webb, accompanied by a narrative but without specific identifying information for most of the buildings pictured. A list of thirty-six buildings locally cited to Webb by R. Shaffner in 2015, including thirteen in Webbmont, appears at http://highlandshistory.com/documents/webb_cabin_list.pdf.

The following building list is only a sampling of his work. Although there is little primary documentation of his work, strong family and local tradition, coupled with the distinctive style associated with him, makes these and many other attributions credible. Research on Joe Webb and his work continues.