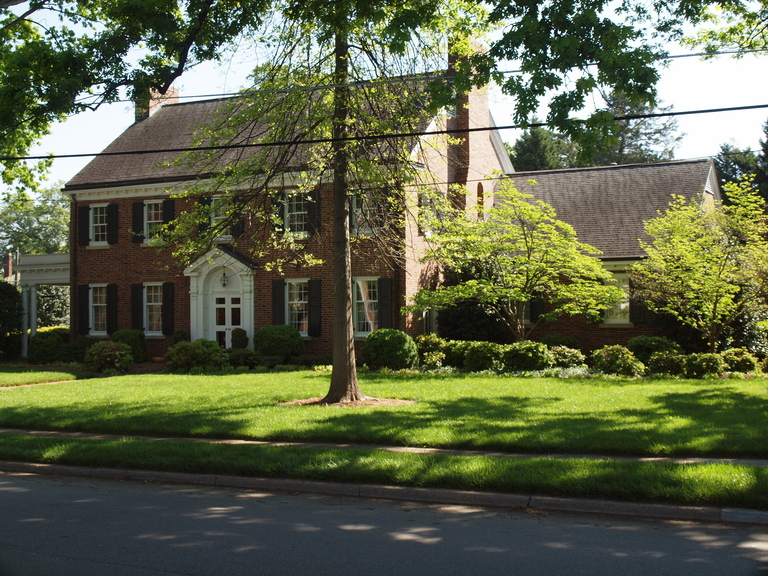 G. Murray Nelson (ca. 1883-after 1940) was a Canadian-born architect who arrived in Raleigh about 1918 or 1919 and became a prominent architect in Raleigh and Durham, first in partnership with James A. Salter (1919-1920) and then with Thomas W. Cooper during the 1920s and early 1930s. He and his partners designed many notable houses, especially for prosperous suburban clients, as well as educational and public buildings chiefly in classically influenced styles.

Little is known of Nelson’s early life and career. The United States Census of 1910 recorded him as Granville M. Nelson, a resident of Queens, New York, an architect who had immigrated into the country in 1905. His household included his wife, Cecile, and daughter Iona, 3, both natives of Canada. When he registered for the United States draft in 1918, he identified himself as Grenville Murray Nelson (b. Nov. 6, 1883), an architect, a British citizen, and a resident of Brooklyn, New York.

Why he moved to Raleigh is unknown; he was first listed in the Raleigh city directory in 1919, as an architect in the firm of James A. Salter and G. Murray Nelson with offices in the Commercial National Bank at 20 E. Martin Street. He resided at 502 N. Blount Street. After Salter returned to solo practice, in 1920 or 1921 Nelson formed Nelson and Cooper with Thomas W. Cooper, a former stonecutter who had been a draftsman in Salter’s office since at least 1915 and in Salter’s and Nelson’s office in 1919. Nelson’s first wife and their daughter must have died: the 1920 United States Census listed him in Raleigh with his wife, Lauretta, born in New York, and daughter Iona, 1 1/2, born in North Carolina.

The Raleigh city directory listed the firm of Nelson and Cooper regularly from 1921 into the early 1930s, and the firm continued to find work during the Great Depression. The partnership seems to have been fluid as well as prolific, for the Raleigh directory often listed the two men individually as well as together, and Nelson also maintained a Durham office listed at 123 Main Street in the Durham city directory. A set of blueprints dated 1931 names the firm as Nelson and Cooper of Raleigh and Durham. The firm’s stylish residences concentrated in the growing suburbs of Raleigh and Durham. Like such examples as the Thomas Ruffin House, the Julian Rand House, and the William Proctor House in Raleigh’s fashionable Hayes Barton suburb, most of these were in Georgian Revival and other classically detailed modes.

Nelson and Cooper also planned institutional buildings in a neoclassical vocabulary. Their State Agriculture Building, a stone-faced edifice, like others around Raleigh’s Union Square, displays Beaux-Arts ideals in its response to the North Carolina State Capitol. Planning for it began during Salter’s tenure as State Architect, and it was completed under the name of Nelson and Cooper. The firm also produced designs for present North Carolina State University, including Ricks Hall and an addition for Leazar Hall. Farther afield, the Manufacturers’ Record of May 25, 1922 noted that Cullowhee Normal and Industrial School (now Western Carolina University) in Jackson County was to erect a brick dormitory with Spanish tile roof and ornamental terra cotta designed by Nelson and Cooper, with H. A. Underwood as engineer; it has not been further identified.

Nelson designed several major residences in Durham, including some for faculty at the Duke University Hospital and Medical School. The J. Deryl Hart House, for example, built on Duke University Drive for a founding chairman of the medical school, displays a Tudor Revival style in keeping with the Gothic Revival style of the West Campus (see Julian Abele); this residence is variously credited to Nelson and Cooper and Nelson alone. A few other Durham houses have been attributed to Nelson or Nelson and Cooper including the Thomas A. Stokes House (1931, 506 E. Forest Hills Blvd.) and the Kronhimer House (1924, 1015 Minerva Ave.). In 1940 the census listed Grenville M. Nelson as a widower and an architect in Raleigh and noted that in 1935 he had resided in Durham. His career thereafter and his death date have not been determined.

(Note: Some accounts show Nelson and Cooper as architects for buildings constructed in the 1910s, but Raleigh city directories show that Nelson was not in Raleigh before 1918 nor was he associated with Cooper until 1920 or 1921.)