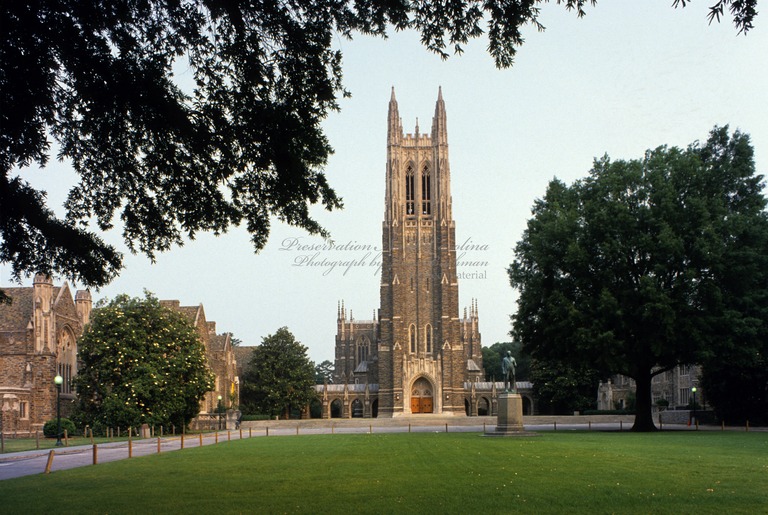 Julian Francis Abele (1881-1950), chief designer of the architectural firm of Horace Trumbauer of Philadelphia, designed the buildings for Duke University as it constructed two new campuses in the transition of Trinity College to a university. With the largesse of James B. Duke and the support of the family philanthropy, the Duke Endowment (est.1924), longstanding Trinity College became the nucleus of a new university. That process included the construction of two adjacent new campuses: a Georgian style Woman’s College on the site of the original Trinity campus in Durham, and a nearby Gothic style campus for undergraduate men and the professional schools. Now called East Campus and West Campus, they opened for students in 1927 and 1930 respectively.

The life and career of the African American Julian Abele are truly enigmatic. He characterized his life “as living in the shadows.” In the Biographical Dictionary of African American Architects, Dreck S. Wilson aptly notes that Abele was the living embodiment of W. E. B. DuBois’ characterization in the classic, The Souls of Black Folk, of “‘double consciousness’: outwardly Black, living in White America, an American, a Negro; two souls, two thoughts, two unreconciled stirrings, two warring ideals in one dark body.”

Julian Abele was born into a respected African American family. His father Charles Abele was born a freedman, fought in the Civil War, and worked at the United States Custom House in Philadelphia. His mother Mary Jones Abele was a milliner. Julian graduated in 1897 from Philadelphia’ s acclaimed Institute for Colored Youth, where his Aunt Julia Jones taught drawing, and steered him toward a career in architecture. In 1898 he earned a Certificate in Architectural Design from the Pennsylvania Museum and School of Industrial Arts. In 1902, Abele graduated from the School of Architecture of the University of Pennsylvania, and in 1903 he received a Certificate of Completion in Architectural Design from the Pennsylvania Academy of Fine Arts. In the latter three institutions Abele was the first of his race to earn a certificate or a degree.

Horace Trumbauer, a Philadelphia native who started his own firm in 1890 and obtained a license to practice architecture in North Carolina in 1925 with certificate #177, learned the profession in part as an apprentice draftsman but primarily through self-education. Quoted by an employee as saying “I hire my brains,” Trumbauer brought Abele into the firm in 1906 and promoted him to chief designer in 1908. Abele remained in that position until Trumbauer’ s death in 1938, after which he continued as a partner in the firm under its new name, Office of Horace Trumbauer. The depth of the Great Depression was not a propitious time to change the identity and name of an established firm. Abele, indeed, spent his life “in the shadows,” as an educated and talented African American working in a race- and class-conscious environment, and relegated to positions under the name of Horace Trumbauer, as well.

The Trumbauer firm excelled in designing Gilded Age palaces or “statement houses,” which exhibited the new wealth and status of an emerging entrepreneurial class. Its work was primarily located in Philadelphia and its expanding suburbs, New York City, and the summer show place of Newport, Rhode Island. The firm presumably got the commission for Duke University because Trumbauer and Abele had worked with James B. Duke in building his house on Fifth Avenue in New York City, adding to his Newport mansion, and designing a palatial house for his estate in New Jersey, which was never built. The Duke University commission was the firm’s only one in the South, its largest project, and probably the most welcome—coming as the economy of the nation slipped into the Great Depression.

For the East Campus, which included some of the original (1892-1923) buildings of Trinity College, the architects employed a Georgian Revival style in red brick with white trim, in a vocabulary and layout reminiscent of the University of Virginia. The Georgian style was selected because of the integration of older buildings and level nature of the land. The official building report notes 6,350,000 cubic feet consisting of eleven buildings—a dominating domed focal point (Baldwin Auditorium) at the end of an open quadrangle flanked by eight matching dormitories and classroom buildings, and two recessed public buildings, a library and a union, on a circular axis. The symmetrical layout with subtle accents gives the feeling of a quiet, secluded campus even though it is located off Main Street in downtown Durham. Access to the Gothic, West Campus is by a 1.5-mile private road.

For the West Campus (1927-1935), laid out on a new site outside the town, the Collegiate Gothic style was selected in consultation with architects and clients. The Gothic campus was built with native volcanic stone from a quarry in Hillsborough chosen for its varied hues and for its economy due to proximity. The physical site of high ground and deep ravines lent itself to a dramatic architectural style, in contrast to the nearby Georgian campus. The official building report notes a West Campus of 12,508,000 cubic feet and a Medical School and Hospital of 4,429,000 cubic feet. Local headlines once proclaimed “Largest Building Permit in the History of the South Issued Today.”

The original Gothic campus consisted of a dominating Chapel, four open and closed quadrangles for dormitories, a student union, library, several classroom buildings, a football stadium, gymnasium, and facilities for the undergraduate Trinity College including an engineering school and five professional schools: Medical with Nursing School and hospital, Divinity, Law, Forestry, and Graduate School. Additions to the original master plan, designed when Julian Abele was with the firm, include various additions to the hospital, a dormitory complex, now Few Quadrangle (1939), a gymnasium, now Cameron Indoor Stadium (1939), a main library addition (1948), and an administration building, now Allen Building (1954). The architectural drawings for the Indoor Stadium are the earliest to have “Office of Horace Trumbauer, Julian Abele, Architect,” on them.

The signature edifice is the Duke Chapel, sited on the highest point with a dominating 210-foot tower uniquely located on the front of the building over the narthex. That dramatic location, along with careful use of Indiana limestone, makes the tower appear taller than it is. The dominating Chapel tower also reflects the wishes of the founder, James B. Duke, as well as the historic ties of the institution with the Methodist Church. In overall plan, the Chapel tower and court with matching arcades on each side unite the open style learning quadrangle of schools and the library to the right facing the Chapel with the open living quadrangle of dormitories, union and gymnasia on the left. One’s first impression of the stone buildings is of sameness but closer inspection reveals purposeful attention to evident differences. Towers of various designs designate important buildings, but no two are alike. Details in the doorways, arches, arcades, stairways and window settings with varying bay arrangements, create a fascinating array of variety. As noted by Catherine W. Bishir in North Carolina Architecture, Abele’s design is a “harmonious marriage of seemingly incongruous elements—the regular Beaux Arts plan of intersecting axes and open and closed quadrangles, and the irregular forms and varied motifs of the late Gothic Revival style.”

A single letter from Horace Trumbauer to George G. Allen, dated June 12, 1926, identifies the source of many of the ideas for the Gothic campus. Allen was going to London to visit the Duke-owned British-American Tobacco Company and Trumbauer listed for him “buildings that were the basis from which the designs of the men’s university were inspired.” The list includes Canterbury, Durham, Chester, Litchfield and Wells Cathedrals, Oxford and Cambridge Universities, Eton College, Glastonbury Abbey, Haddon Hall in Derbyshire and Much Wenlock, Priory, in Shropshire.

Validation of an architect’s supposed intent is not often recorded in writing but one might draw such a conclusion from an account by a distinguished visitor to the campus appearing in the Duke Alumni Register in September 1937. While driving through North Carolina in August 1937, Aldous Huxley, the English novelist, noted “A pleasant but unexciting land” when “all of a sudden, astonishingly, a whole city of gray Gothic stone emerged from the warm pine forest.” He was thrilled by the “academic city” with the dominating “leaping tower” of the huge cathedral, and the “spreading succession of quadrangles.” He called the campus “genuinely beautiful, the most successful essay in neo-Gothic that I know.” Like most visitors, Huxley was unaware that the original campuses of Duke University were designed by the architectural firm of Horace Trumbauer of Philadelphia, where Julian F. Abele, an African American, was chief designer and later successor to the founder of the firm.

Julian F. Abele died from a heart attack, April 18, 1950, in Philadelphia. The last building he designed for Duke University was a new administration building being planned at the time of his death. Now called Allen Building, it essentially completed the original design of the main quadrangle on West Campus. Abele was recognized by the university with the unveiling of his portrait, the first of an African American on campus, in Allen Building on April 21, 1989. At the same time, African American students renamed their annual spring banquet the Julian Abele Awards and Recognition Banquet, and their two principal awards became the Julian Abele Scholarship and the Julian Abele Award for an outstanding black faculty member or administrator. In April 2000 the university centered its 75th Anniversary Celebration on a major exhibit celebrating the life of Julian Abele. The exhibit featured items from the University Archives and original drawings and documents on loan from family and Philadelphia-area repositories.

An intriguing question about Julian Abele remains—Did he personally visit the campus he designed? Family lore and early biographical articles stated that he did not visit the campus in Durham because he did not wish to experience the harsh segregated “Jim Crow” laws of the South. Yet rumors circulated among the local African American community that he did indeed view the campus. Since there are no significant personal papers or official records of the architectural firm extant the question appears unanswerable.

However, Susan Tifft, writing for the Smithsonian Magazine in February 2005, reported that “In the early 1960s, John H. Wheeler, a prominent black banker in Durham, North Carolina, told George Esser, then executive director of the North Carolina fund, that he recalled Abele coming to visit the campus during construction. Moreover, in a 1989 interview, Henry Magaziner, son of Abele’ s friend and Penn classmate Louis Magaziner, recalled Abele telling him that a Durham North Carolina hotel had refused to give him a room during a trip to the university, while accommodating his white associate, William Frank.” Although these are second-hand accounts—one an unlikely source she uncovered and the other a brief exchange buried in a series of interviews on file at The Athenaeum of Philadelphia—Tifft’s thorough research in oral history lends credence to idea that perhaps Abele did view the dramatic and lasting results of his considerable talent. It would be another tragedy of the Jim Crow South if he did not.