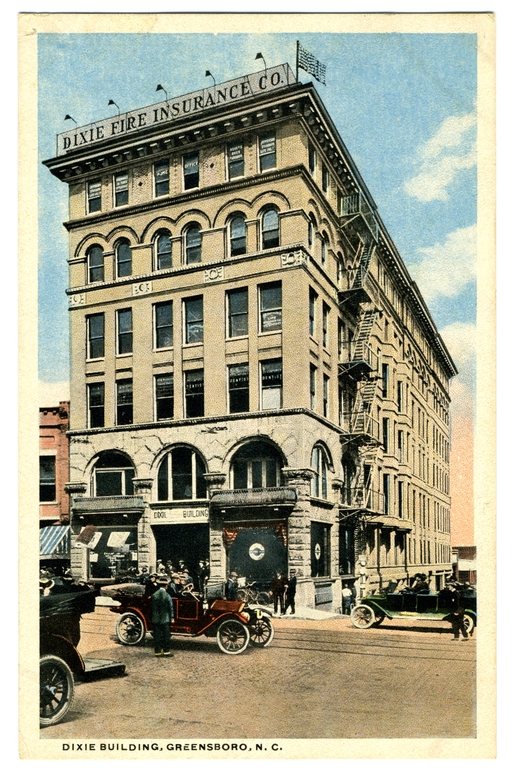 Frank A. Weston (ca. 1850-ca. 1930?), architect, was a native of Rome, New York, who practiced in Denver, Colorado, before coming to Greensboro, North Carolina. In Colorado he was associated for a time with noted architect Henry Trost (1860-1933), who gained fame in western and midwestern architecture. He was in Denver in 1900, an architect, with his wife Kate, a native of Wisconsin. Little is known of Weston’s work in Colorado.

About 1904, Weston moved to Greensboro after “having been formerly located in Denver . . . for 30 years.” Meeting a need in the growing town with few resident architects, he found commissions promptly including commercial buildings and residences. Among the most impressive, and one of the largest buildings in town in its day, is the 6-story Dixie Building (City National Bank). Its bold stonework and arched openings recall the predominant styles in Denver at the time. Notable among his houses are the Frank S. Lambeth House, a large Colonial Revival residence built for a leading furniture industrialist in Thomasville, and the Frank A. Weston House, a boldly composed Shingle Style house with handsome stonework, which he cited in 1912 as “his own beautiful residence on South Park Drive.”

In 1908 the High Point city directory listed an architectural firm called Rose and Weston in Greensboro, probably Frank Weston and William P. Rose. On October 1, 1912, Weston formed a partnership with the younger architect Harry Barton, a newcomer from Philadelphia; the association lasted about two years. On December 8, 1912, the Greensboro Daily News carried an advertisement for the partnership, “recognized as being among the leading architectural firms in the south.” There Weston listed among his works the Elks home, Odd Fellows building, the McAdoo, Banner, and Fisher buildings, and many residences (see note below), only few of which have been identified.

Weston was active promoting the architectural profession in North Carolina. In 1907, when he was listed as one of five architects in Greensboro in William Comstock’s Architects’ Directory, he was noted as a member of the North Carolina Architectural Association, organized in 1906. When North Carolina architects formed the state chapter of the American Institute of Architects in 1913 (at a meeting in Greensboro), Frank A. Weston was among the original members of the new state chapter. The “baby chapter,” as its founding president, Hill C. Linthicum, called it, had five members of the national AIA plus seven “chapter members” including Weston.

Weston was one of the first licensed architects in North Carolina. His license certificate, issued in 1916, was #70 in the official registration book of the North Carolina Board of Architecture, one of the early group of men who were licensed in the state based on their having been in professional practice prior to the licensing act of 1915.

How long Weston continued in practice is uncertain, though he apparently lived in Greensboro until the mid-1920s. His younger partner Harry Barton soon became one of Greensboro’s leading architects. Weston last appeared in the Greensboro city directory in 1924. He is evidently the Frank A. Weston, native of New York, who at age 80 was residing in the National Elks Home in Bedford, Virginia. His date of death is not known.

Note: Besides the buildings cited in the building list for Frank A. Weston, some projects were credited to him in the Manufacturers’ Record or in his advertisement in the Greensboro Daily News (Dec. 8, 1912), but further information is needed about their status. These include in Greensboro the Greensboro Lodge No. 602, B. P. O. E. Clubhouse (MR 9/20/06), and a Store and Office Building, Fisher Estate (MR 10/7/1909). He also cited in 1912 houses for Judge S. B. Adams, R. G. Vaughn, Paul Lindley, W. H. Stone, R. E. Buck, J. L. King, and T. J. Murphy; references to these individuals in city directories point to addresses where houses of the period no longer stand, as noted in the building list. Further research may discover photographs or relevant street address changes.