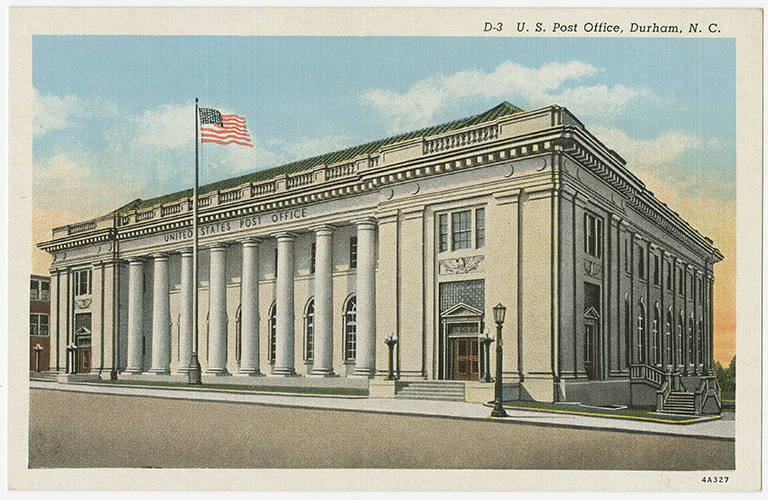 H. (Howard) Raymond Weeks (August 18, 1901-October 27, 1956) came to North Carolina not long after graduating in architecture from the Georgia Institute of Technology (Georgia Tech) and practiced in the Tar Heel state for the rest of his career. As a partner of Thomas C. Atwood in Atwood and Weeks and on his own, he was especially well known for educational and state government buildings.

Weeks was born in Palmyra, Missouri, to Howard L. and Musella Robert Weeks; the family later resided in South Carolina. After graduating from Georgia Tech in 1923, Raymond worked for the Atlanta architectural firm of Robert and Company. He soon moved to North Carolina, where he was employed as a draftsman by the T. C. Atwood Organization during the major expansion of the University of North Carolina at Chapel Hill in the 1920s, working with chief engineer Thomas C. Atwood and architect Arthur C. Nash, and he also worked for the firm of Atwood and Nash. The Daily Tar Heel of March 8, 1930, reported that Weeks had been “notified by the state board of registration of architects that he has passed with honor the state examination and will be issued a c[e]rtificate as licensed architect. Mr. Weeks is at present in the service of the firm of Atwood and Nash, Inc., architects and engineers of Chapel Hill.”

The professional relationships within the firm must have been satisfactory, for after Nash retired in 1930, Atwood formed a partnership with the newly licensed Raymond Weeks as Atwood and Weeks, with Nash often serving in a consulting capacity for many years. In 1930, the census showed Weeks as head of a household that included his wife, Elsie, and their infant daughter, Patricia. Despite the crash of 1929 and the ensuing Great Depression, Atwood and Weeks found some key projects in the early 1930s, most prominently the Raleigh Memorial Auditorium and the United States Post Office in Durham. The latter was such a substantial project that according to the Durham Sun of October 5, 1931, in preparation for supervising the work, “the main office of Atwood and Weeks, architects, was today moved to Durham from Chapel Hill.” The firm would keep a branch office in Chapel Hill, as it still had “much work to do for the state university.”

Weeks was active in professional organizations in the state. He was the first president of the North Carolina Architects Association, which merged with the North Carolina Chapter of the American Institute of Architects, of which he became a member in 1938. He served as president of the state chapter of the AIA in 1945. In an especially important role, Weeks chaired the State College (present NCSU) accreditation committee for the School of Architecture and in 1948 made a report to the state AIA chapter that Henry L. Kamphoefner had been selected as dean of the new School of Design, a selection that would shape the future of the school along modernist lines.

Practicing on his own after Atwood’s retirement and death, Weeks continued to plan and execute state buildings and schools. Projects included work at the University of North Carolina, Davidson College, and Meredith College as well as public school buildings in Durham and Rocky Mount. At UNC he was especially active in planning dormitories and other structures needed to accommodate the postwar demand for student housing.

In association with engineer William C. Olsen, Weeks also planned one of the first major buildings at the Raleigh-Durham Airport. Plans dated 1954 for the airport “administrative building” show that it contained the waiting rooms, baggage rooms, restrooms, etc., so that it served as the passenger terminal as well as administrative offices; these are in the Harris and Pyne Records at NCSU Libraries Special Collections. (Previously, an article in the High Point Enterprise of June 18, 1952 cited George Watts Carr and Olsen as architects and engineer of a proposed passenger terminal at the Raleigh-Durham airport.)

Weeks was working on plans for buildings at the university on a tight deadline just days before his sudden death from a heart attack at age 55. He was survived by his wife, Elsie, and was buried in Durham’s Maplewood Cemetery. According to a tribute to Weeks in the Durham Sun, he was an “active and energetic” force in community affairs including the establishment of building codes and “the elimination of substandard housing.”