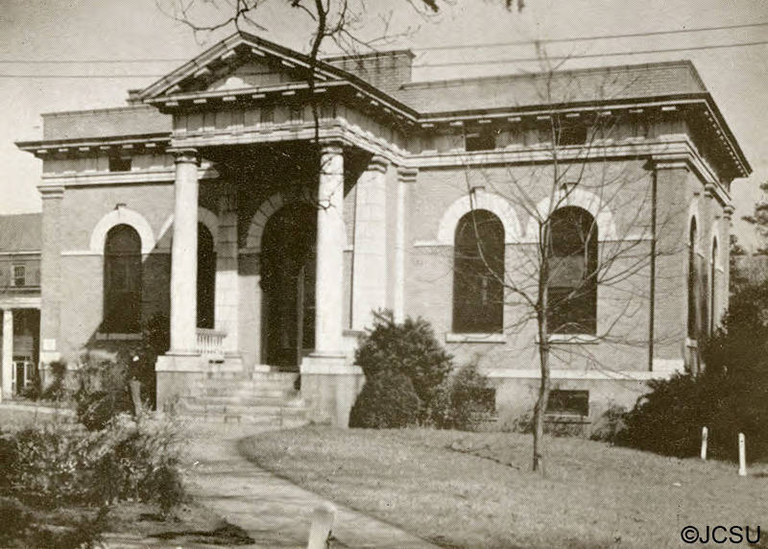 Leonard L. Hunter (1881-1925), often cited as L. L. Hunter, was one of several architects active in Charlotte during its early 20th century boom years. Operating on his own and with various associates, he planned numerous buildings in the city and elsewhere, chiefly in classically derived styles. Like other architects of his day, including his early partners Frank Pierce Milburn and James M. McMichael, he took advantage of local newspapers and the Manufacturers’ Record to publicize his work. Of the many buildings for which he was reported to be preparing drawings, only a few have been identified with certainty. Much of his extensive work has been lost. He is best known as architect of the E. C. Marshall House in Myers Park and the Carnegie Library on the Johnson C. Smith University Campus.

Leonard LeGrand Hunter, a native of Mecklenburg County, was a son of Mr. and Mrs. Robert H. Hunter. His architectural training evidently began under the prolific regional architect Frank P. Milburn in 1899: the Charlotte Observer of February 25, 1899 reported that “Mr. L. L. Hunter of Croft” was “studying draughting in Architect Milburn’s office.” On December 24, 1900 the Observer noted that Hunter, “formerly with F. P. Milburn here,” had gone to Columbia, S.C. where he would be working with Milburn. In 1903, according to the Observer of April 2, Hunter entered into a partnership with Charlotte architect James M. McMichael, with whom he had been employed for 14 months. (The same article noted that Hunter had been a draftsman for Frank P. Milburn for three years and had recently taken a “special course under instructors in New York.”) The firm of McMichael and Hunter sent at least 14 notices to the Manufacturers’ Record concerning their projects in 1903-1904, including drawing plans for a school in Hickory, a Baptist church in Waynesville, a German Reformed church in Concord, a hotel in Lumberton, a lodge building in Salisbury, and a Presbyterian Church in Wadesboro. Whether the firm gained any of these commissions or whether they were executed is unknown. The partnership was dissolved as of March 1, 1904, as noted in the Charlotte News of March 4.

Hunter promptly began to place his own ads in Charlotte and other newspapers and to send notices to the Manufacturers’ Record, and local newspapers carried accounts of his production of plans for buildings in Charlotte and beyond, including Bessemer City, Asheboro, and Morganton. In 1905, the Charlotte Observer listed several buildings planned by Hunter for which contracts had been let, including a residence for George S. Bearden, a brick store and residence for T. W. Hawkins, an addition to the home of W. M. Long—all in Charlotte—and a large house for Robert Allison in Yorkville, S. C. In the same year, Charlotte newspapers noted Hunter’s plans for residences for W. C. Maxwell of Charlotte and R. H. McNeill of Fayetteville and cited other projects for which Hunter might gain a commission.

By the end of this busy year, the Observer of December 28, 1905, reported on Hunter’s activities and described him as both architect and contractor for several local residences. The account stated that he was to begin erection of houses in Charlotte for John A. Pharr, F. O. Hawley, Jr., and R. A. Dunn. These included the grand Colonial Revival style F. O. Hawley, Jr. House and R. A. Dunn House, the latter of which was featured in a postcard as one of Charlotte’s most “beautiful homes.” Both displayed the imposing porticoes of the popular “Southern Colonial” style popularized in North Carolina by architect C. C. Hook of Charlotte and others. In the public realm, an especially important project for Hunter was the design of the massive Charlotte Auditorium (Charlotte News, January 24, 1907). The construction contract went to Charlotte builder J. A. Jones, who had recently completed Charlotte’s Selwyn Hotel (Charlotte Observer, May 12, 1907). All of these buildings have been lost.

In 1908 L. L. Hunter entered into a partnership with architect Franklin Gordon, who had come to Charlotte from Atlanta in 1905 to manage construction of the Selwyn Hotel and decided to relocate to the city (Charlotte Observer, March 16, 1908). In 1908-1910 alone, the Manufacturers’ Record noted at least fifteen projects involving Hunter and Gordon, few of which have been further identified. Among the firm’s notable projects still standing are the neoclassical Chalmers A. R. P. Church, the Tudor Revival style E. C. Marshall House in Myers Park, and the picturesque George Stephens House, the latter for a principal developer of Myers Park. Hunter and Gordon continued their productivity for several more years. In 1916 Hunter and Gordon won the commission to plan a school building in Huntersville, for which architects Hook and Rogers and Wheeler and Stern had also submitted plans. In 1917 Hunter delivered plans for a city hall in Lumberton (Charlotte Observer, November 18, 1917), which is probably the red brick, classically detailed edifice now known as the Lumberton Municipal Building. As indicated by Charlotte city directories, it was about this time that Hunter and Gordon terminated their partnership.

During the late 1910s and early 1920s, Hunter frequently published his card—L. L. Hunter or Leonard L. Hunter, Architect—in Charlotte newspapers and appeared in newspaper reports of designing or remodeling houses, schools, apartment buildings, and many other types of other structures. In 1918 he designed the White Motor Company garage and commercial/apartment building on Poplar Street for W. F. Dowd (Charlotte News, February 28, 1918) and was preparing plans for the V. J. Guthery Apartment Building at 504 N. Tryon St (Charlotte News, May 16, 1918). During the 1920s, his projects included facilities for black citizens, such as the “neat brick” Biddleville Presbyterian Church (Charlotte Observer, June 15, 1922), and the Second Ward School on Stonewall Street (Charlotte News, August 15, 1922); both have been lost. In 1924, according to an article in North Carolina Preservation, Charlotte banker Robert A. Dunn commissioned Hunter to plan his luxurious stone residence in Blowing Rock, a mountain resort community favored by wealthy Charlotteans.

According to his death certificate, Leonard L. Hunter died on February 20, 1925; his birth date was given as August 11, 1881. He was survived by his widow, Bessie Wiley Hunter, and two children, L. LeGrand Hunter, Jr., and Elizabeth Wiley Hunter. He was interred in Elmwood Cemetery in Charlotte. His obituary in the February 21, 1925 Charlotte Observer noted that he had been a leading architect of the city, a Presbyterian, and especially prominent in the Charlotte Lodge of Elks. Hunter was also active in the North Carolina Architectural Association. His honorary pall bearers included his brethren in the Charlotte architectural profession: Franklin Gordon, C. C. Hook, W. G. Rogers, M. R. Marsh, Louis H. Asbury, M. E. Boyer, and W. H. Peeps.

Note: It is uncertain which of Hunter’s many projects were built and are still standing; many early 20th century buildings in Charlotte have been lost. This building list is only a sampling of his work. As further information is located, additional properties will be added to the building list.