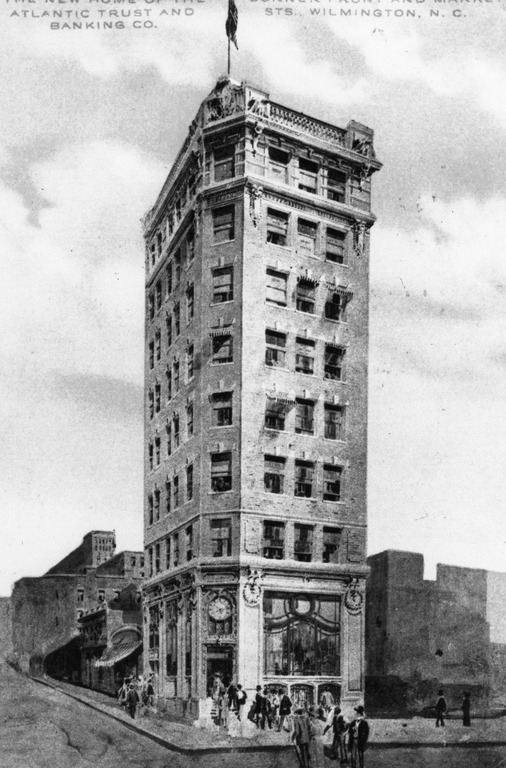 Joseph Schad (ca.1865-after 1920) was a German-born contractor prominent in early 20th century Wilmington during a flurry of private and public construction. He executed projects from designs by noted local architects including Charles McMillen, Henry E. Bonitz, and Joseph F. Leitner. The best-known surviving examples of his work are the Elizabeth Bridgers House (1905-1906), an imposing mansion in stone, and the Atlantic Trust and Banking Building (1911), the city’s first skyscraper.

According to an account written in 1913 (see below), Schad had come to the United States about 18 years earlier (ca. 1895) and worked in various locations. He is probably the Joseph Schad listed in the 1900 United States Census in Birmingham, Alabama, a carpenter and a native of Germany born in 1865, and married to Clara, also a native of Germany. He reportedly had immigrated to the United States in 1891 and had married Clara in 1897. He also spent some time in South Carolina before coming to Wilmington.

Schad went to Wilmington in 1905 as contractor for the massive stone house designed by architect Charles McMillen for Elizabeth (Mrs. P. L) Bridgers. The stone was cut by the Columbia, S. C. Stone Company, which sent stonecutter foreman J. H. Niggel to Wilmington for the project. In 1906 “Joe” Schad was cited in a Wilmington newspaper as “the well known South Carolina contractor” who was building Mrs. Bridgers’s “handsome new residence.” This project was soon followed by a contract in 1906 for an elaborate stables building for Mr. Frank T. Mills, designed by Leitner and Wilkins, with Schad still identified with South Carolina. Such successes encouraged Schad to move to Wilmington. In 1907, the Wilmington Morning Star of March 27 cited “Mr. Joe Schad, the well-known contractor who recently located here,” as the builder of the new Peterson and Rulfs Building at 202 N. Front Street, a shoe store designed by Leitner and Wilkins, architects.

Other Schad projects in Wilmington included the renovation of St. Paul’s Evangelical Lutheran Church (1907) planned by architect Henry Bonitz, and extensive “improvements” to the New Hanover County Courthouse (Wilmington Morning Star, September 24, 1909). The Wilmington Morning Star of November 10, 1910 reported that Schad had been awarded the contract for the new Wilmington Savings and Trust Company building on Princess Street, an entirely fireproof bank building of neoclassical design designed by Joseph Leitner. This prestigious commission was soon followed by the Atlantic Trust and Banking Building (1911), the city’s first skyscraper, also designed by Leitner.

In 1913, the Wilmington Morning Herald of June 10 carried a laudatory article on Schad. The writer cited the “remarkable building activity in Wilmington during the past eight years” and the large number of “handsome business houses and attractive residences,” of which “a large percentage” were the work of the “popular contractor” Schad. The article noted that he had come to “this country” about 18 years before and had “distinctly made good in Wilmington.” Citing the importance of contractors as well as architects, the article asserted, “much of the beauty and stability of the buildings of this city and section, erected of recent years, has been due to the skill and industry of Mr. Joseph Schad.” The writer continued by asserting that “no class of men play a more active part in the growth of a progressive city like Wilmington than does the up-to-date contractor and builder; the practical man who makes real the ideas of the architect and the plans of the property owner.” “Too often in the writing of the growth and prosperity of a city, the men who do the practical work, the ones who use hands as well as brains, are neglected, the owner and the architect receiving all the credit. This should not be the case, the credit should be shared fairly and equally by those to whom it belongs.”

In 1921, the Wilmington Morning Star of January 21 reported that Schad had left for New York and was soon to sail for Spain, where he would “have charge of the erection of a building for the United States government” for the use of “the minister from the United States to the Spanish government.” The newspaper noted that this was “quite a compliment to the ability of the Wilmington man,” who had over the last several years erected “some of the finest business buildings in Wilmington.” Schad’s subsequent career is not known.

Note: In 1910 the United States Census listed Joseph Schad as a contractor living in Wilmington with his wife Margaret and noted that both were natives of North Carolina. In 1920, the census listed Joe Schad as a German-born contractor and architect whose native language was German, residing in Wilmington with his wife, Clara, also a native of Germany. Possibly the 1910 census made some errors.