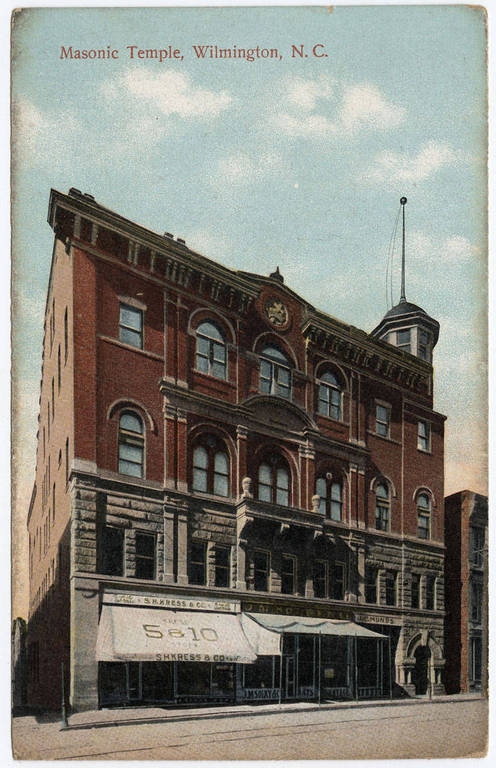 Charles McMillen (1854-1911), an Irish-born architect, was one of many mobile architects who worked in cities across America in the late 19th and early 20th centuries. Active in Duluth in the 1880s and 1890s, he moved to Wilmington, North Carolina, after winning a competition to design the port city’s Masonic Temple in 1898. He quickly became a leading architect in town and designed several major buildings in Wilmington as well as the Grand Lodge Masonic Temple in Raleigh before moving in 1908 to Oklahoma, where he died in 1911.

McMillen’s early life, training, and accomplishments are unknown. According to United States census records, he was born in 1854 in Ireland, but when he came to the United States is not established. By 1885 he was working as an architect in Duluth and was married to Isabel, a native of New York, and they had two young children, Charles Jr., and Mary, both born in Minnesota. Isabel died by the early 1890s, and the widowed Charles married a young woman named Nell from Michigan. In Duluth, McMillen became an accomplished architect in a thriving and immensely wealthy industrial city known for its imposing architecture, including ornate Queen Anne residences and massive brick and stone Richardsonian Romanesque public and institutional buildings. McMillen’s best known building in Duluth (with architect E. S. Stebbins) was the city’s landmark Masonic Lodge of 1889, a towering 6-story stone edifice in ornate Romanesque Revival style.

How McMillen learned about the Masonic Temple project in Wilmington, North Carolina, has not been ascertained, but it is likely that the Wilmington Masons advertised for submissions in Masonic journals of the day. In 1898 McMillen submitted a proposal, and won the commission over local contenders James F. Post and Henry E. Bonitz.

McMillen met with a warm welcome in Wilmington. The Wilmington Star of January 6, 1899, reported that he and his wife and daughter had arrived from Duluth the previous day and were registered at the Orton Hotel. “Mr. McMillen is the architect who drafted the plans for and will superintend the construction of the magnificent new Masonic Temple soon to be erected on Front Street by the Masons of Wilmington.” Before the end of the year, the Wilmington Messenger reported on November 12, 1899, that McMillen’s design for the Masonic temple had “met with very generous approval. He is an architect of experience and marked ability. Fourteen Masonic Temples have been built in different cities by plans and specifications prepared by him. He has personally supervised, in a most acceptable manner, the erection of the Masonic Temple here.”

On the strength of this commission and encouraged by his contacts in Wilmington, McMillen settled in the southern port city, where in 1900 McMillen, 45, and his wife Nell and their children were living on Red Cross Street. McMillen hit Wilmington at a propitious time for a new architect familiar with urban models, and his work and probably his personality suited the local leadership. With the Masonic project McMillen tapped into an important client group, for the Masons in Wilmington included both the old guard and the leading Jewish businessmen.

McMillen offered the city the cachet of urban experience and sophisticated design skills, as well as expertise in constructing large and complex buildings with modern technological features. Such qualities, including his mastery of the imposing Richardsonian Romanesque style as well as new neoclassical modes, doubtless recommended him to leading Wilmingtonians. In Duluth, McMillen had been one of many architects competent to execute urban models, but in Wilmington his experience and skills enabled him to become something of a “big frog in a little pond.”

Even before the Masonic Building began to rise, McMillen attracted a commission for the Messenger and Southern Bell Telephone and Telegraph Building (1899) in red pressed brick with brownstone trim, and within a few years, he designed imposing downtown buildings on premier locations. A 1908 promotional booklet highlighted new downtown buildings, including McMillen’s Murchison National Bank (1902), the boldly executed Romanesque Revival Southern Building (1905), and the I.M. Bear Building (1906). Indicative of McMillen’s appeal to the local establishment, when the Carolina Yacht Club at Wrightsville Beach near Wilmington was destroyed by a hurricane in 1899, the members had him plan its successor along similar lines, and the elite Cape Fear Club asked him to remodel their venerable club house in 1902. Leading Wilmingtonians also employed him to design or remodel their residences. He transformed an antebellum Italianate house into a Queen Anne residence for Congressman John D. Bellamy, Jr. (Wright-Harriss-Bellamy House), and planned a neoclassical mansion in locally unusual Indiana limestone for the railroad empire widow Elizabeth Eagles Haywood Bridgers in 1905 (Bridgers House).

Soon after arriving in Wilmington, McMillen began efforts to organize the profession and connect with other architects. In 1900, the Wilmington Star reported on December 29 that McMillen had been elected vice president of the Southeastern Architectural League, newly formed in Charlotte. He was instrumental in founding the organization, which had as its president Richard Sharp Smith of Asheville. Wilmington architect Henry Bonitz was a member of the executive committee, and there were also members from Greensboro and Raleigh. The league preceded by several years the North Carolina Architectural Association (1906) and the North Carolina Chapter of the American Institute of Architects (1913). Early in 1901, McMillen responded to a “circular letter” he had received from Glenn Brown, secretary of the national American Institute of Architects, encouraging non-member architects to join the AIA. McMillen wrote to Brown on April 28, 1901, that he was eager to join and he wished he had done so earlier because he had practiced as an architect in the northwest since 1883. He noted that he and others had recently organized the Architectural League for architects in North and South Carolina. He asked if he could join the AIA based on endorsements from members of the Minnesota chapter of the AIA. But because he did not know personally the requisite three AIA national members who could endorse him, he (like other architects outside of major cities) did not meet the standard for membership. He continued his interest in professional organizations, however, and the Wilmington Star reported on July 14, 1907 his election to the board of directors of the North Carolina Architectural Association—predecessor to the state chapter of the American Institute of Architects.

McMillen’s specialty in Masonic and other fraternal buildings led to commissions beyond Wilmington. In Goldsboro, he planned a large, classically detailed building for the state Odd Fellows Home orphanage, the Nathaniel Jacobi Memorial Building, named for a Wilmington benefactor. When the Grand Lodge of Masons in Raleigh decided to erect a skyscraper office and temple on a prime site on Fayetteville Street, they commissioned McMillen to plan the “magnificent” and classically detailed 7-story “skyscraper”—one of the state’s first two steel-reinforced tall buildings along with William Lee Stoddart’s Independence Building in Charlotte. In Wilmington, McMillen employed young architects as draftsmen, including Harry P. S. Keller, and in 1907, with many projects on hand, he announced in the Wilmington Star (June 9, 1907) his new partnership with architect Carl B. Cooper as McMillen and Cooper.

For reasons yet unknown, in 1908, after a remarkably successful decade in North Carolina, McMillen made yet another move, back to the western part of the country. The census of 1910 listed him as an architect in Oklahoma City with his wife Nell and his children. But soon after this, the Wilmington Star of August 8, 1911, reported, “Mr. Charles M’Millen Dead - Former Wilmingtonian Dies in Oklahoma City.” The cause was heart failure. The newspaper announced that his burial would take place at Oakdale Cemetery after a funeral with Masonic honors, and commented, “Mr. McMillen was one of the most prominent architects in this section at the time he left Wilmington. The local Masonic Temple, the Sprunt Building, and the Bellamy home were all designed by him, and stand as monuments to his ability in his chosen line of work. He had hundreds of friends here who will be pained to learn of his untimely death.” During his short tenure in Wilmington, McMillen brought his skills with large-scale and elaborate architecture to a community eager for statements of urbanity and prosperity, and he produced some of its most imposing edifices of the turn of the century.