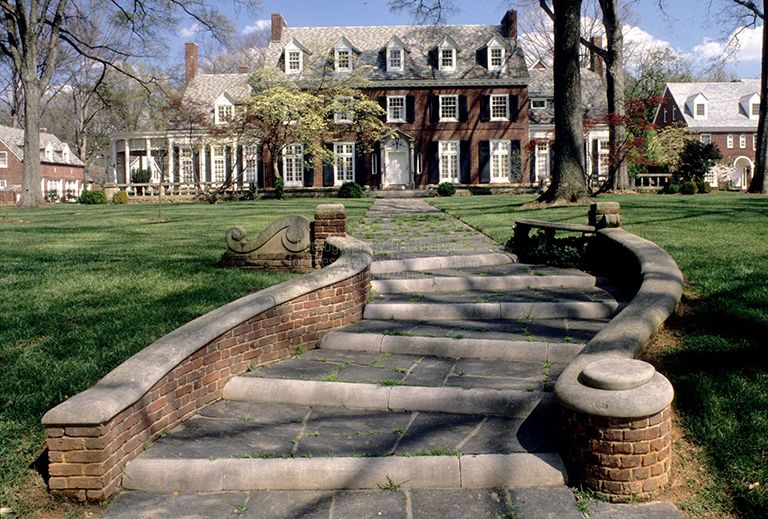 Martin Evans Boyer, Jr. (July 22, 1893-February 17, 1970) was a long-lived and prominent architect in Charlotte best known for his residential architecture of the first half of the twentieth century, primarily in the city’s most prestigious suburbs. He is considered by many to be Charlotte’s preeminent revivalist architect.

Boyer was born in Glen Wilton, Virginia, to Martin E. Boyer, Sr., and Joanna McMichael Boyer and was thus the nephew of prominent Charlotte architect James M. McMichael. The Boyer family moved to Charlotte when Martin, Jr., was a boy, and he attended Charlotte High School. Except for a brief period in his youth when his family lived in Cincinnati and his service in the armed forces during the World Wars, Boyer spent the rest of his life in the growing city and took a prominent role in its architectural profession and civic and social life. Both his design skills and his personality must have struck a chord with Charlotte’s expanding elite, for he received commissions for many substantial houses and other buildings in the community and beyond.

On September 15, 1912, the Charlotte News reported that Boyer had left to begin his studies at “the Carnegie ‘Tech.’ school. . . . He is a splendidly equipped young man and will make good at any college.” He graduated in 1917 with an M. A. in architecture from present Carnegie-Mellon University, an institution known for its Beaux-Arts approach and emphasis on historic revival styles, and he won awards for his Beaux-Arts designs. Boyer came by his interest in history naturally. The Charlotte Observer of February 23, 1917, reported on a party held by his sister Lavinia, a student at Queens College, to celebrate the birthday of George Washington, at which the participants dressed in colonial garb, and the hostess wore a colonial bonnet garnished with real cherries; after her recitation of stories of Martha and George Washington, her guests “began eating the cherries from the bonnet.”

After graduation from college, Boyer served as a naval architect during World War I. Returning to civilian life, he joined the Southern Engineering Company and worked in Columbia, S. C., and in Charlotte. In 1920 he opened his own firm in Charlotte, and except for his during service during World War II as an officer in the Corps of Engineers, he continued his practice there until his retirement in 1966. He initially had his office in the Trust Building in Charlotte, along with other architects. After a fire in 1922 destroyed the building, including all his drawings, he shared an office for a time with landscape architect Earle S. Draper. He relocated to an office in Brevard Court.

Boyer was among the first of Charlotte’s architects to become a member of the American Institute of Architects. When he went to Wilmington to attend a meeting of the group, the Charlotte Observer of July 29, 1921 noted that he was also secretary and treasurer of the Architectural Association of North Carolina.

Some of Boyer’s projects in the early 1920s were for public schools—one in Lilesville and another in Morganton—but as Charlotte’s suburban growth took off in the 1920s, he found a special niche in designing residences for the families of the business and professional leaders who populated such elegant suburbs as Eastover and Myers Park. He is credited with designing as many as twenty-five houses in these two neighborhoods, exceeding the number by other leading local architects who planned the city’s fine suburban residences of the era, such as Franklin Gordon, C. C. Hook, Leonard L. Hunter, and William H. Peeps. The landscape designs for many of these houses were by Earle Sumner Draper.

Like his contemporaries, Boyer worked easily in a range of popular styles, especially the Colonial, Georgian, and Tudor revivals that Charlotte’s prosperous clients favored, plus a few ventures into Spanish villa and English cottage modes. As Thomas Hanchett has observed, “No one in Charlotte understood house-as-theater better than Martin Boyer.” He displayed a gift for the dramatic to enhance the house’s grandeur or to create a cozy impression of an ancient cottage. The list of his clients comprises many of the city’s business, professional, and political leaders.

Typical of local newspapers in the 1920s, the Charlotte News carried accounts of notable new houses under construction, and on April 12, 1922, gave special attention to the prominently positioned, 15-room brick house Martin Boyer had designed for Mr. and Mrs. J. L. Snyder on Queens Road—the J. Luther Snyder House. Estimated to cost about $50,000, it was to be of the “Virginia Colonial style,” with a large reception hall similar to the Carroll mansion in Maryland. Complemented by a landscape design by Earle S. Draper, it was “expected to be one of the handsomest homes in Myers Park.” The newspaper attention and the imposing presence of the Snyder residence likely boosted Boyer’s career among Charlotte’s growing elite and his reputation as a revivalist designer. Boyer was described by a client as a perfectionist who insisted on having samples made of the bricks, tiles, etc., to make sure they suited the client: “He would never design a house if the owner was in a hurry” (Charlotte Observer, March 26, 1977).

In 1929, the year the North Carolina Chapter of the American Institute of Architects established a program of design awards, Boyer’s Snyder house was among the winners. In that same year, Boyer received the commission for an equally grand residence in contrasting Tudor Revival style and in stone in the recently established Eastover suburb, the Hamilton C. Jones III and Bessie Jones House, for which construction continued despite the onset of the Great Depression.

As historian Stewart Gray has noted, even during the Great Depression, when many architects struggled to find work, Boyer continued to attract clients. Gray indicates that he worked on plans for as many as 48 houses between 1929 and 1941. In 1935 Boyer was commissioned by North Carolina textile manufacturer and University of North Carolina alumnus Kenneth S. Tanner (for whom he had designed a vacation house near Lake Lure in 1932) to design a student residence adjacent to the university campus—later known as West House (no longer standing)—to provide college housing for Tanner’s son and other relatives, plus two other students at no cost.

Among Boyer’s best known projects in the 1930s and 1940s also included S&W cafeterias—the founders were both Charlotte men—which generally employed modernist motifs suited to the new type of dining experience. Boyer’s S&W cafeterias (all of which are lost) included those in Charlotte (1932), Raleigh (1933), and Greensboro (1949). Frank O. Sherrill—the S of S & W—recalled that he and Boyer had “traveled all over the country looking for ideas.” Boyer used his skill at creating a special setting to make these cafeterias highly popular downtown eateries for governors and office workers alike as well as the scene of social events and meetings. The S&W Cafeteria on West Trade Street in Charlotte, Sherrill said, was one of their finest, and was “modeled after Peacock Alley in the Waldorf Astoria.” When North Carolina school children made their school trips to Raleigh, the S&W Cafeteria was on their itinerary along with the State Capitol, the Governor’s Mansion, and the Hall of History (Burlington Daily Times-News, May 27, 1950).

Boyer is known locally for his role in the 1930s in rescuing the historic former United States Mint on West Trade Street, which was slated for demolition for an addition to the United States Post Office. After lobbying unsuccessfully to preserve it on its original site, he was instrumental in enabling it to be dismantled and rebuilt with community support as the Mint Museum of Art from his record drawings and designs—an early and important preservation project in Charlotte. As shown in the finding guide to the collection of his papers (see reference below), Boyer also designed a wide range of building types besides residences in Charlotte and beyond, including examples of commercial buildings, filling stations, office buildings, schools, supermarkets, and stables. It is interesting to note that while many of Boyer’s traditional residential projects have survived, his essays in innovative building types in the 1930s—stylish downtown cafeterias and model public housing—have been lost.

Boyer was a charter member and a deacon of the Myers Park Presbyterian Church. He married Arabelle Johnson, a daughter of William W. Johnson, in 1919 in Charlotte, and he was survived by her and their sons Martin III and Miles of Charlotte and a daughter, Mrs. Thomas M. Plonk of Raleigh. He was buried at Charlotte’s Elmwood Cemetery. A monograph on Boyer’s work is needed to depict his career as a representative and successful architect who helped shape the New South city he made his home. His surviving and accessible papers and his many buildings offer opportunities for further research.

Notes: A large collection of Boyer’s papers at Special Collections, Atkins Library, at the University of North Carolina at Charlotte includes more than 600 drawings and nearly 200 photographs. Many of these images are posted at the following website at North Carolina State University Libraries: http://d.lib.ncsu.edu/collections/catalog?f[classification_facet][]=Martin+Evans+Boyer+Papers%2C+1910-1993.

The building list here is but a sampling of Boyer’s work and focuses on surviving buildings. The extensive finding guide to the Boyer collection cited above gives names and sometimes dates for numerous projects beyond those featured in the present Building List. See also the National Register of Historic Places nominations for Eastover and Myers Park.