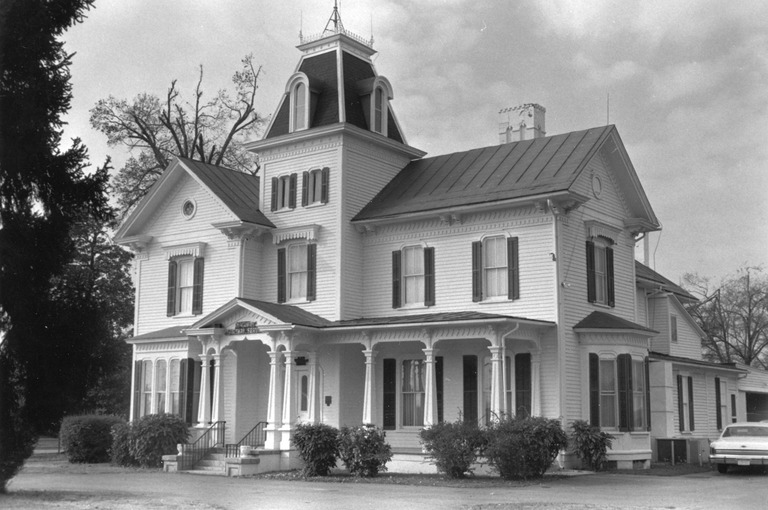 John Denny (1820-1893) was a carpenter and builder active for several years in his native central Piedmont. The son of Thomas Denny and Hannah Rankin and a member of a large and long established local family, he was the much younger brother of house carpenter Eli Denny (1804-1876) and probably learned his trade from him. In 1849 Eli had expanded the rural residence of textile pioneer Edwin M. Holt as a stylish villa designed by New York architect Alexander Jackson Davis. After the Civil War, John Denny continued the association with the Holt manufacturing family, building stylish houses for E. M. Holt’s sons and daughters (and sons-in-law) in Graham and elsewhere. These include some of the county’s most notable examples of late 19th century residential architecture.

In 1850 John was listed in the United States Census as a carpenter aged 30 and head of household in Guilford County, which also included his brother Eli, a carpenter aged 45, plus six other Denny family members whose relationships to John or Eli are not noted. Although Eli Denny is credited as contractor for the Alamance County Courthouse completed in 1851, according to Durwood T. Stokes’s Auction and Action, John was one of the carpenters who executed the woodwork.

In his early 30s, John Denny established himself on his own. In 1851 he married Rebecca Adeline Harden (1831-1894), with whom he would have at least nine children, of whom seven survived into adulthood. In 1853 John published an advertisement in the Greensboro Patriot of January 15, 1853, seeking to hire “6 or 8 journeymen carpenters, to whom constant employment will be given,” plus two or three boys as apprentices to the carpenter’s trade. At that time John Denny was still a resident of Greensboro. No projects in Greensboro have been identified as his work. In 1857, he offered for sale his house and lot on East Market Street in Greensboro (Greensboro Patriot November 13, 1857), and the advertisement continued into 1860.

In 1860, the United States Census listed John Denny, a carpenter aged 40, in Alamance County, possibly in Graham. He was noted as owner of $200 worth of real estate and head of a household that included R. A. (Rebecca) and five children aged 8 to 1 years old. He reportedly moved to Graham, the county seat of Alamance County in about 1868. In 1870 at age 50 he was listed as a house carpenter in Graham whose household included Rebecca, eight children, and Rebecca’s mother, Rebecca Harden, aged 76. John was listed again in 1880 as a carpenter, with his wife and five children.

The Reconstruction era was especially turbulent in Alamance County, culminating in the 1870 lynching in Graham of Wyatt Outlaw, a prominent black citizen, by the Ku Klux Klan, which included leading local Democrats. Denny was one of several citizens called to testify about the events at a hearing in 1871. Denny stated that he had been home in bed on the night of the lynching but had seen about twenty men, all in disguise, walk toward the residence of Wyatt Outlaw, enter Outlaw’s house, and then pass by his own house, mount their horses, and proceed toward the courthouse. “I saw a body hanging on the tree next morning, but did not go to it” (The Southern Home, March 7, 1871). He did not identify any of the men. No one was ever convicted of the murder. Relative peace was restored along with political dominance by white Democrats including the prominent Holt family. A few years later, in 1876 John Denny was one of several local men elected to serve as county commissioners.

Some of John Denny’s most notable construction projects were commissioned by the Holt family of Alamance County. As industrial pioneer Edwin M. Holt’s children grew to maturity and married, he brought his sons and sons-in-law into his burgeoning textile business. (A number of E. M. Holt’s children married partners from the nearby tobacco-growing plantation county of Caswell.) Having had his own house enlarged by Eli Denny in 1851, in the 1870s E. M. Holt employed Eli’s younger brother on several projects. It is possible that John assisted Eli in construction of E. M. Holt’s antebellum house.

The Greensboro North State of July 9, 1873, announced that E. M. Holt, Esq., had commissioned the construction of not one but two “elegant dwelling houses” on Main Street in Graham, for which John Denny was the “architect and builder.” These were likely the two houses built there for Holt daughters and their husbands—for Mary Elizabeth Holt and her husband James N. Williamson; and for Emma (Emily) Holt and her husband James White. (Some sources give slightly earlier dates for these houses.) Another house was built on Main Street in this period for Holt’s daughter Frances (Fannie) Ann Holt and her husband Dr. John L. Williamson of Caswell County; it was razed in 1965.

Evidently Denny returned to the Williamson house to update it. In 1878, the Alamance Gleaner reported on April 2 that John Denny, “the well known builder and contractor” had the job of rearranging and so altering the residence of Captain J. N. Williamson “as to make it a new house.” The same newspaper reported on April 23 that when completed Williamson’s house would be the “finest and handsomest residence in the county. Mr. John Denny, who has built so many houses in the county, and Mr. Lyndon Swaim is the architect.” Lyndon Swaim was a Greensboro newspaper publisher and sometime “architect” best known for planning the Guilford County Courthouse. Known as Elmhurst, the Williamson residence on Main Street is a rare example of the Second Empire style in the county, having a mansard roofed tower in the elbow of the L-shaped building.

In 1878, the Raleigh News of November 6 reported that John Denny had nearly completed “the outside work of the palatial residence of Col. Thomas M. Holt. The exterior appearance is very fine.” The newspaper claimed, “If we except probably a few residences in some of our cities, there is perhaps no more magnificent private building in the state.” Industrialist and political figure Thomas Holt was a son of Edwin M. Holt and served as governor of North Carolina in 1891-1893. The house described was located near the textile community of Haw River in Alamance County and no longer stands.

In addition to those noted in newspapers, some stylistic similarities with the James and Emma White House suggest that Denny might have built or remodeled two houses for E. M. Holt’s sons in the 1870s—the Lawrence Holt House, and the L. Banks Holt House (which incorporated a much older Holt home where E. M. Holt was born). Both still stand in rural Alamance County not far from E. M. Holt’s antebellum residence; documentation of their builder remains to be found.

Besides the Holt projects, in 1876, the Alamance Gleaner noted on March 14 that carpenters had completed work on a new residence for “Captain Graham in Graham, with workmanship that spoke well for its builder, Mr. John Denny.” This was likely the residence of James A. Graham, a Confederate veteran and son of the governor, William Graham, for whom the town of Graham was named. This house stood on North Main Street in Graham. John Denny was also active in the Graham Presbyterian Church where he served as an elder, and in 1879 he undertook a renovation of the antebellum church building to provide a new roof and erect a cupola to house a bell. He also made various repairs to the courthouse. In 1884, perhaps deciding to retire from building, he opened a hardware store in Graham, and his wife Rebecca had a millinery shop on the floor above (Alamance Gleaner, March 13, 1884).

Not long after this, John Denny made a change in his occupation and location, probably to be near his sons. The Reidsville Review of March 12, 1890 advertised the “new business” in Reidsville known as John Denny and Sons, which sold china and groceries at a location identified as D. E. Morris’s “old stand.” It appears that some of John Denny’s sons had made the move to the tobacco manufacturing and sales town of Reidsville somewhat earlier and he decided to join them. In 1892 the Reidsville Review of February 19 noted that John Denny had retired from “active business.” Denny Brothers purchased the Denny and Sons china store and consolidated it with their hardware business. John Denny died at his home in Reidsville on March 11, 1893, after a brief illness. His funeral was held at the local Presbyterian church (Reidsville Review, March 17, 1893). His widow, Rebecca Denny, died the following year. Both were interred in Greenview Cemetery in Reidsville.

John Denny’s legacy remained strong in local memory for several years. In 1899, the Greensboro Patriot of May 3 carried a story about contractor J. N. Longest, who was described as one of Greensboro’s leading builders and the builder of numerous structures in Reidsville and Pinehurst as well; he was associated for several years with William Carter Bain in the Central Carolina Construction Company. It was noted that “in early life Mr. Longest acquired a thorough knowledge of his profession under John Denny, of Graham, N. C., one of the best known builders of his day.”