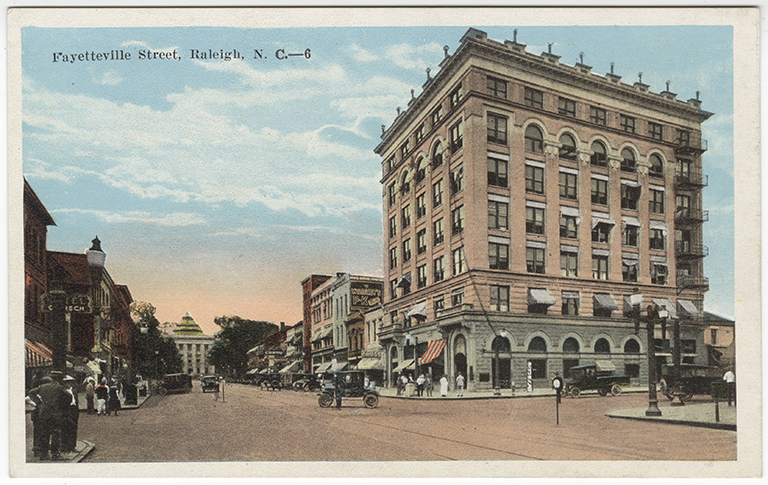 In 1905 in Greensboro, a small group of businessmen including the experienced and well-known North Carolina contractor William Carter Bain (1839-1920) and the younger newcomer architect Frank A. Weston (ca. 1850-ca. 1930?) organized a new construction company. Although the firm went bankrupt in 1911, during its six-year run, the Central Carolina Construction built a remarkable number of notable buildings designed by various architects. Their projects included some of the state’s premier examples of their types from the early 20th century, such as the Salisbury Passenger Depot in Salisbury, the Grand Lodge Masonic Temple in Raleigh, the Carolina Apartments in Wilmington, and the Wachovia Bank and Trust Company Building in Winston-Salem.

W. C. Bain, president of the company, was a well-regarded and experienced builder, and F. A. Weston, vice-president, was an architect who had recently arrived in Greensboro from Denver. Bain had been the contractor for the Dixie Building (1904) in Greensboro, for which Weston was the architect. J. N. Longest, also a contractor, was secretary and treasurer, and E. D. Tessler the superintendent. In 1905 the firm had $20,000 of $30,000 subscribed stock “paid in.” (Evidence suggests that the firm had begun as early as 1895, so this may have been a re-incorporation.) Probably the founders created the venture in order to bid successfully on the increasing number of large urban building projects in North Carolina and nearby states. Doubtless drawing upon Bain’s and the other founders’ network of acquaintances and connections, the company quickly gained important commissions. In some cases, newspaper accounts mentioned only Bain, president of the company, as the winner of the contract, as in the case of the Masonic Building in Raleigh, an important early example of reinforced concrete construction designed by architect Charles McMillen, then a resident of Wilmington (Wilmington Messenger, April 12, 1907).

The firm was quick to promote its accomplishments. In a large advertisement in the Raleigh Times of October 12, 1907, illustrated with images of the Masonic Temple—a drawing and a photograph of it under construction—the company listed as “Buildings Recently Finished,” a railway roundhouse in Greenville, S. C.; an apartment house for Carolina Apartment Company, Wilmington, N. C.; three store buildings for J. F. Gerall in Wilmington; the Southern Railway Passenger Station in High Point; Store buildings for the Fisher estate, Greensboro; an addition to the Keeley Institute in Greensboro; the Southern Bell Telephone Company Building in Asheville; the First National Bank Building in Fayetteville; Planter’s National Bank in Rocky Mount; and residences for S. B. Adams in Greensboro, H. B. Mebane in Graham, and Alice Southworth in Southern Pines. Even if some of these had been started before the partnership was formed, this collection was a notable achievement, and the advertisement rightfully stated that the company, only two and one-half years old, had “made an unparalleled record as a builder.”

The advertisement in the Raleigh Times also gave a list of buildings “in course of construction,” which comprised several railroad buildings including a passenger station and freight station for the Norfolk and Southern in Greenville, N. C.; St. Philip’s Episcopal Church in Durham—a prestigious edifice designed by architect Ralph Adams Cram of Boston and New York; and the “Magnificent Masonic Temple in Raleigh,” obviously the firm’s pride and joy. (The advertisement also noted that Messrs. Bain and Longest had previously undertaken important buildings in Greensboro as well as the Pinehurst Hotel, and Col J. S. Carr’s residence in Durham.)

One of the Central Carolina Construction Company’s most prominent projects was the Southern Railway Passenger Depot in Salisbury, designed by architect Frank Pierce Milburn; the towered edifice in tan brick was one of the state’s several imposing depots of the early 20th century, but it is a rare survivor today. The company moved the project right along: the contract was awarded in 1907 (News and Observer, March 30, 1907), and the Charlotte Observer of August 31, 1908, announced the opening on the following day of the “handsome new depot at Salisbury,” which Salisbury citizens called “the prettiest between Washington and Atlanta.” The edifice, which cost more than $120,000, had modern and racially segregated facilities, handsome finish materials, and good lighting, which the newspaper described in detail. “Plans for the depot were drawn by Mr. Frank P. Milburn and the building was done by the Central Carolina Construction Company, of Greensboro,” which had also recently completed the “handsome $20,000 office of the Southern Express Company” located north of the passenger station. The surroundings near the depot were to be improved, with “shanties” to be removed and paving installed. The depot immediately became an effective advertisement for the firm.

Another highly prestigious project was the Wachovia Bank and Trust Company in Winston-Salem, a skyscraper designed by Frank P. Milburn. A story in the Winston-Salem Journal noted that F. D. Caldwell, a superintendent with the company, had spent essentially a year in Winston-Salem superintending the project. Various newspapers carried other brief articles about school and mill commissions awarded to the firm.

Over the years, members of the Central Carolina Construction Company left the firm. In 1906, Weston left the company to pursue his career as an architect and subsequently formed architectural partnerships with other architects (Greensboro Daily News, March 17, 1906). In 1910, F. D. Caldwell, the superintendent for the company’s Wachovia Bank in Winston-Salem, left to form with local builder J. F. Ange the Ange-Caldwell Construction Company in Winston-Salem (Winston-Salem Journal, December 24, 1910). A few key members stayed on, including president Bain.

In early 1911, the company still had many commissions in hand or in prospect. But for reasons not entirely clear, somehow in the complex world of credit that facilitated construction, especially of large projects, the firm ran into financial trouble. It was adjudged bankrupt on November 25, 1911, and evidently closed down. It is not clear what transpired concerning completion of the firm’s existing contracts. (See the Charlotte Evening Chronicle, November 23, 1911; Greensboro Patriot, December 7, 1911, and others.)

Three years later, the Greensboro newspaper ran a story headlined, “Mr. W.C. Bain Reenters Contracting Work in This City,” explaining that he had been “out about a year.” He had lived there for about for about 20 years and constructed a number of local buildings, including the well-known Dixie Building (Greensboro Daily News, February 22, 1914). No explanation was given for his absence, and he continued as a contractor for several more years.