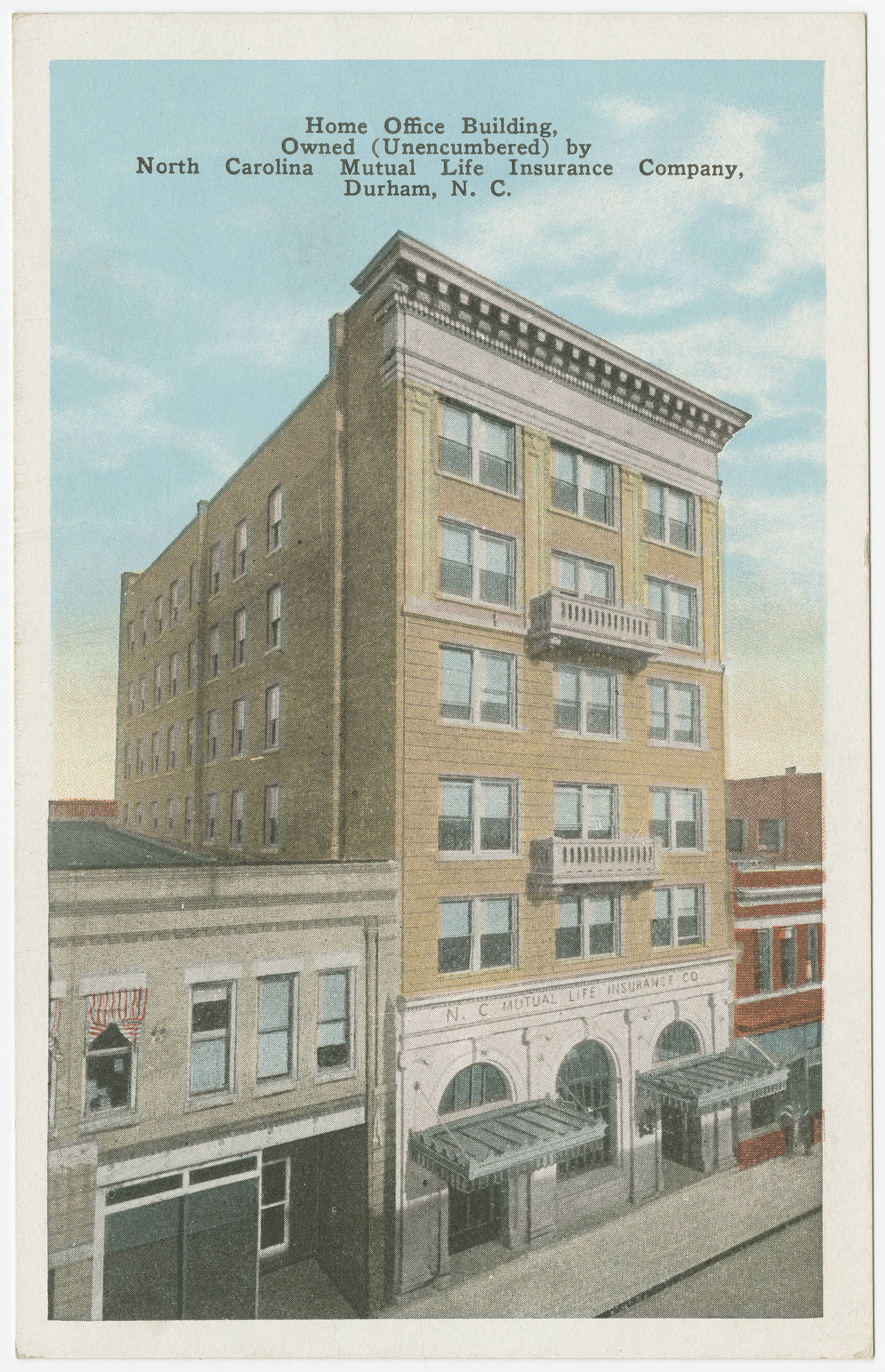 Rose and Rose, a prominent Durham architectural firm formed by brothers Garland Roberson Rose (1879-1937) and James Pickett Rose (1883-1964), had a long-lived and extensive practice during the urban growth era of the early 20th century. Like other architects of their day, they worked easily in many different styles and undertook various building types. Among their best known works are the Mechanics and Farmers Bank in central Durham and Trinity Avenue Presbyterian Church in the Trinity Park neighborhood, They also designed many houses, typically featuring very robust versions of Craftsman, Mission, and other styles.

Garland R. (Roberson) Rose and James P. (Pickett) Rose were natives of Statesville, where in 1880, Garland Rose, aged 1, was living with his parents Pickett Rose (1843-1883) and Eugenia Rose (1851-1922), in a household that included his elder siblings Marie, Hattie Eugenia, and Willie (William); James P. was born in 1883. Eugenia was a native of Person County, and Pickett Rose came from Fayetteville. Pickett died in 1883, leaving Eugenia a widow with young children. What became of the family in the several years after Pickett’s death is unknown (the census of 1890 does not survive).

By 1900 the brothers Garland R. and James P. Rose as well as their older brother William E—all identified as students—were living together in the household of their aunt, Hattie Brown, who ran a boarding house in Raleigh. Their elder sister Marie was married, and their other sister Hattie was living with relatives in Statesville. Eugenia’s whereabouts in that year are unknown.

Both Garland and James studied at present North Carolina State University, though their field of study has not been identified, nor is it certain when or whether they graduated. The Statesville Record and Landmark of July 1, 1902 reported that “Messrs. Jame[s] and Garland Rose are at home from the Agricultural and Mechanical College, Raleigh.” Several years later in Durham, Garland and James P. Rose were among the organizers of a local chapter of former students of the “A & E college,” which was also cited as North Carolina state college (Durham Morning Herald, August 14, 1919).

As was normal practice, Garland and James supplemented their education by working as draftsmen for established architects. As shown in city directories, Garland Rose gained experience and expertise as a draftsman with a series of established architects. He worked first (1903) for William P. Rose in Raleigh, a prolific architect and builder whose familial relationship if any is unknown and then (1905) for Charles W. Barrett in Raleigh, an architect previously associated with William P. Rose. After these brief periods of employment, in 1905 Garland Rose moved to Durham to work for Hill C. Linthicum, one of the city’s preeminent architects and a leader in the state’s architectural profession. This connection defined the direction of the Rose brothers’ careers. In 1909 John P. was also employed as a draftsman with Linthicum, and by 1910 Garland was a partner in the firm.

The Rose brothers and their extended families maintained close ties. Garland Rose married Ethel Augusta Shaffer of Raleigh in 1906, and their extended family lived together for a time as the brothers established themselves. The 1910 census recorded Garland (G. R.), aged 30, as head of a household that included his wife Ethel and their baby daughter Honora, plus his brother James (J. P.), aged 27, and J. P.’s wife Georgia, along with Garland’s mother-in-law Alice Shaffer, 50, and three young nieces.

Details of Garland Rose’s professional trajectory appeared in a typically glowing account in the promotional publication, Durham Illustrated, of 1910:

Born in Statesville, NC on June 9, 1879, Garland R. Rose has been a resident of Durham since 1905, coming to this city from Raleigh, N. C., where he had been practicing his profession since his graduation in 1903 from his college course in architectural drawing and structural engineering at the A. & M. College. He immediately entered the employ of Hill C. Linthicum as draughtsman and by his careful attention to every detail of his work and his expert knowledge of his profession quickly won his way to the front, and [on] … January 1, 1910, entered into partnership with Mr. Linthicum, forming the firm of Linthicum and Rose. Since coming here Mr. Rose has been connected with and instrumental in the construction of many important buildings, both in the city of Durham and throughout the entire State. He is considered by those capable of judging to be one of the best draughtsmen in North Carolina, and like Mr. Linthicum is a member of the State Architectural Association. He has closely allied himself with the city’s best interests and makes his home at 414 Cleveland Street.

In this period, Hill C. Linthicum was a leader in promoting professionalization for architects in North Carolina, first in the North Carolina Architectural Association (established in 1906) and then in founding the North Carolina Chapter of the American Institute of Architects in 1911 and 1912. As a partner in the firm of Linthicum and Rose, Garland Rose associated with leaders in the state’s architectural profession. On September 16, 1913, Rose was one of the five architects—including such established figures as Linthicum (who became president), Louis H. Asbury, Richard Sharp Smith, and Willard C. Northup (see Northup and O’Brien)—who met on September 16, 1913, to form what Linthicum called “a baby chapter” of the AIA.

Shortly after this, having had a solid period of training in older architects’ offices, Garland Rose established his own firm, with his younger brother as partner. A notice in the Durham Morning Herald of December 6, 1913, announced, “The firm of Linthicum & Rose, architects, has this day been dissolved by mutual consent. All parties indebted to the firm are hereby notified to settle the same with Hill C. Linthicum, and all indebtedness will be settled by him. Hill C. Linthicum, Garland R. Rose, Dec. 4, 1913.” Linthicum posted an adjacent notice thanking his friends for their patronage for the past ten years and stating that he would continue his practice in his present office at 501-503 Trust Building. The Durham Morning Herald of December 7, 1913, and subsequent issues carried advertisements for the new firm of Rose and Rose. Their office was also in the Trust Building, on the fourth floor. (In the meantime, in 1912 Linthicum’s son, H. Colvin Linthicum had come to work with his father as a draftsman; he later became a partner in the firm of Linthicum and Linthicum and continued to practice after his father’s death.)

The 1910s and 1920s were prolific decades for Rose and Rose, as they had been for Linthicum and Rose. During this era, the firm planned numerous residences in Durham’s expanding suburban neighborhoods. These included bungalows and many variations on the foursquare house form, large and small, often characterized by especially robust detailing, including Craftsman elements, hefty roof brackets, and stout porch posts of brick or rough stone. Although only a few of their residential works have been identified with certainty, of those that have been identified, a high proportion survive.

Good publicity doubtless helped their business. During 1916-1917, the Durham Morning Herald carried a Sunday series of illustrated articles about new additions to Durham’s “Homes Beautiful,” which included some designed by Rose and Rose including bungalows and the foursquare type (see building list). Typically the feature on the “house beautiful” of the day was accompanied by advertisements for companies employed in building it and supplying materials. (Issues of the Durham Morning Herald in newspapers.com stop in 1922.)

In 1928, the firm was one of seven architectural firms listed in the Durham city directory: Atwood and Nash, George W. Carr, R. R. Markley, Milburn and Heister, G. Murray Nelson, Northup and O’Brien, and Rose and Rose. Possibly because Rose and Rose undertook few major public projects or perhaps because their client list was somewhat less prestigious than some of the other architects’, their firm is not as well known today as some of their contemporaries.

As well as practicing architecture together, Rose and Rose’s households also remained close, and for many years they resided on Geer Street in Durham. The United States Census of 1920 listed Garland as a 40-year-old architect living with his wife, Ethel, 36, and daughter Honora, aged 10. James’s household included his second wife, Thelma, sons Beverly and J. P. Jr., plus James and Garland’s mother, Eugenia, and their unmarried sister Hattie. The Durham Morning Herald of April 28, 1922, reported the death of Mrs. Eugenia Rose, a “well known lady,” at the home of her son Garland R. Rose on Geer St. in Durham. A native of Person County born in 1851, she was a daughter of Col Henry L. Sweaney and Mary Moore Sweaney and a descendant of Gen. Stephen Moore (a prominent figure during the American Revolution). She had moved to Durham from Statesville ten years earlier. In 1930, both families still lived on Geer Street, and Garland’s household now included his wife’s mother, Alice Shaffner, 82.

At the time of his death, Garland Roberson Rose was still identified as an architect with Rose and Rose and a resident of 108 W. Geer St. in Durham. His wife, Ethel, survived him. He was buried in Oakwood Cemetery in Raleigh. The obituary for James P. Rose, 81, of Tampa, in the Tampa Tribune of August 6, 1964, reported that he had lived in Riverview, Florida, for two years. He was survived by his wife and three sons, two daughters, and four grandchildren. He was buried in Maplewood Cemetery in Durham, as was his wife, Thelma.

Note: Any family relationship between the brothers Garland and James P. Rose (natives of Statesville) and the brothers William Preston Rose and David Jeptha Rose of Johnston and Wayne counties remains unknown. That Garland Rose worked as a draftsman for William P. Rose suggests there may have been a kinship, but evidence is missing at this point.

The following building list is taken mainly from the website opendurham.org, which contains illustrations and information from earlier architectural surveys and National Register of Historic Places nominations.