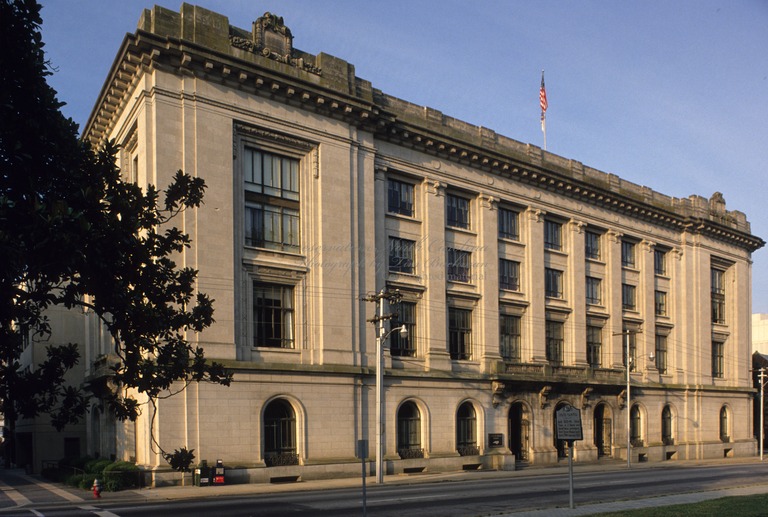 Philip Thornton Marye (1872-1935), architect, developed a practice in Atlanta that reached across the South and included several notable Beaux Arts and Art Deco style buildings in North Carolina. During the early twentieth century, he planned a series of fine Beaux-Arts style buildings in Raleigh including a trio of elegant banks, which together gave downtown Raleigh new panache. Because most of these works have been lost, Marye’s contribution to the city’s early 20th century character is not widely recognized. His best known surviving work is the State Administration Building (Ruffin Building), which exemplifies his subtle handling of neoclassical elements to create a monumental building in a tight urban site and set the tone for government buildings around Union Square.

Marye was born in Newport News, Virginia, and grew up near Fredericksburg. After studying at Randolph Macon College (1888-1889) and the University of Virginia (1889-1890), he worked in the architectural office of Glenn Brown, then opened his own practice in Newport News and had an office in Washington, D.C. (1902-1903). He also served in the Spanish American War and in World War I.

A commission for the design of Atlanta’s railroad terminal prompted Marye’s move to that city in 1904. After operating his own firm in Atlanta for several years, in the 1920s and 1930s he engaged in various partnerships, with Barrett Alger (Marye and Alger, 1920-1921); Richard Alger (Marye, Alger & Alger, 1922-1925); Oliver J. Vinour (Marye, Alger and Vinour, 1926-1929); and J. Nisbet Marye and J. Warren Armistead, Jr. (Marye, Vinour, Marye and Armistead, 1930-1935). His firms’ best known buildings in Atlanta include the Fox Theater (formerly the Shrine Mosque), St. Luke’s Episcopal Church, and the Southern Bell Building. His works appeared throughout the Southeast in the 1910s and 1920s, and in the late 1920s the firm landed a plum client when Southern Bell Company employed Marye, Alger, and Vinour to design its buildings throughout the region.

While still practicing on his own, Marye gained key commissions in Raleigh during the city’s growth and rebuilding spurt in the 1910s. Erected when taste in Raleigh as nationally was shifting from the eclecticism of the late 19th century to the Beaux Arts esthetic, Marye’s work constituted some of some of Raleigh’s earliest and most sophisticated examples of Beaux Arts design and showed his command of Beaux Arts principles in compositions of various forms and styles. While other architects active in the state at this time competed with him for some projects, his designs appealed strongly to local clients seeking an up-to-date and imposing architectural presence. Marye’s first major commission in Raleigh, which he obtained in 1909, was evidently the Raleigh City Hall and Auditorium (1910-1911), a major public edifice in robust neoclassical style, which the Raleigh Times of May 31, 1911 cited as evidence of the “New Raleigh Spirit.” It was followed by the elegant, stone State Administration Building designed to harmonize with the State Capitol which it faced. A rebuilding of the Wake County Courthouse in stone with a full-height portico supplanted an ornate Second Empire edifice of the 1880s.

At the same time, Marye also designed three distinctive Beaux Arts banks in downtown Raleigh. The News and Observer of May 11, 1914 carried a story applauding “three great banking buildings” erected downtown in the last three years, each one displaying “perfection of art and construction”: Raleigh Banking and Trust Company, the Citizens National Bank, and the Commercial National Bank. All three “by singular coincidence,” were designed by Marye, who had attracted favorable attention with Raleigh Banking and Trust, and the other two bank commissions soon followed. The newspaper writer stated that the Raleigh Banking and Trust Building was modeled on the “Madelene of Paris”; the Commercial National Bank featured a Gothic Revival style unusual among office buildings of the day and comparable to the famed Woodworth Building in New York; and the Citizens National Bank adhered to the “Ionic order of Roman architecture” with the banking room inspired by the Renaissance. When the “house warming” was held for the Commercial National Bank, the News and Observer of October 21, 1913, provided enthusiastic coverage and several photographs. “There is nothing in North Carolina comparable to it, nothing in half a dozen states. It is of it is own kind and as complete a bank building as can be found in the country. . . . It will make you think of the Vatican and give you a touch of the Old World.” Taken together, the banks and public building built within a few blocks and years of one another did much to transform Raleigh’s architectural character in the “new spirit” conveyed by Beaux Arts precepts expertly rendered.

During the late 1920s, the firm of Mayre, Alger, and Vinour planned four Southern Bell office buildings in North Carolina—in Charlotte, Greensboro, Salisbury, and Winston-Salem—which featured an Art Deco mode suitable to the novelty and modernity of the telephone system. After 1930, the Southern Bell Company returned to a more traditional Georgian Revival style. Although Mayre was head of the firm, and his signature appears on the drawings for the North Carolina telephone buildings, some writers credit Oliver Vinour, who joined the firm in the 1920s, with the Art Deco designs for Southern Bell.