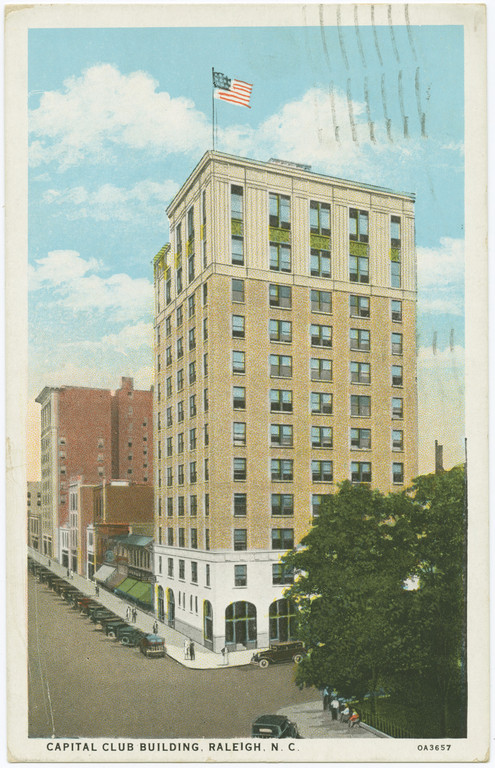 Frank B. (Buchanan) Simpson (January 6, 1883-November 18, 1966), an architect who practiced for many years in his native Raleigh, had a prolific practice that extended to other communities throughout the state and possibly beyond. On the 1940 National Census of Engineering and Architectural Personnel, he listed his occupation as “general architecture.” Working in a variety of styles from Beaux Arts classicism to Art Deco, he planned municipal, residential, and commercial buildings but was best known as a specialist in school buildings. Although he never listed a formal partner, he worked with several architects and builders over the years, including architect P. Thornton Marye of Atlanta, builder Joe. W. Stout of Sanford, and C. Eugene Savage, a Raleigh school designer.

Simpson was the son of Dr. John A. Simpson, a Virginia native, and Narcissa J. Simpson of North Carolina. Both his parents taught at the North Carolina Institute for the Education of the Deaf, Dumb, and Blind, his mother as a teacher of the blind and his father as musical director and teacher of mathematics. Simpson briefly attended the North Carolina College of Agricultural and Mechanical Arts, now North Carolina State University. The College’s 1897-1898 Annual Catalogue listed him as a student in the Sub-Freshman Class, a class designed to provide a technical education to young men unable to enroll as freshmen, but his name did not appear in subsequent catalogues. In 1900 at age 17 he was living in his parents’ household on W. Jones St. in Raleigh. It is said that he left Raleigh for a time and worked as a draftsman in cities such as Pittsburgh, Chicago, and New York. After returning to Raleigh, he married Carrie Lewis Barns of Elm City, North Carolina in 1907, and by 1910 they had two daughters, Frances and Carrie Ann.

Simpson was involved in planning several prominent buildings in Raleigh. The 1910s brought two prestigious projects for Beaux-Arts edifices in which he was the local architect working in association with the prominent Atlanta architect, P. Thornton Mayre: the State Administration Building of 1913 and the Wake County Courthouse of 1915, the latter built to replace an earlier courthouse. Among his own Raleigh projects, he planned the Electrical and Engineering Building (now Winston Hall), in 1910 at present North Carolina State University, the Haywood Store Building on Fayetteville Street, and the multi-storied Vance Apartments near the State Capitol. His best-known work in Raleigh is the Capital Club Building, a skyscraper office structure built in 1930 for a men’s club of which Simpson was a member.

Simpson also took commissions for projects in several small towns. In Apex in 1911, the directors of the Merchants and Farmers Bank hired Simpson and contractor Joe Stout of Sanford to rebuild their structure after the “Great Fire” that year destroyed their previous building. The brick, classically detailed building housed the bank on the first floor and the H. C. Olive Store on the second floor. On September 15, the Apex Journal celebrated the recovery from the fire and acclaimed Simpson’s building as “the handsomest bank building in Wake County outside of Raleigh.” Simpson and Stout collaborated again in 1917 on a substantial bungalow in Apex for Lindsay Olive. During the same period, Simpson designed such buildings as the # Littleton National Bank # in 1912, the large, columned Charles T. Sinclair House in Carthage in 1914, and the Lorraine Hotel in Lumberton in 1916.

Simpson developed a strong reputation as school specialist and evidently found favor with clients who sought well-designed and functional facilities on limited budgets. Especially important were his structures for the Colored Normal schools in Fayetteville and Elizabeth City, now Fayetteville State University and Elizabeth City State University, in 1907 and 1908, respectively. He continued to serve Fayetteville State, where he repaired the roofs of Hood Hall, a boy’s dormitory, and Taylor Science Hall in 1949 and did additional repairs on Cook Dining Hall in 1950; in the same year he worked with architect Marion A. Ham to design and build the college’s auditorium and a girls’ dormitory. Besides these college projects, he planned graded schools all across the state, from the Elizabeth City Graded School (1908) in the east to Marshall High School (1925) in the west. His post World War II schools included Enfield Graded School in 1950 with designer C. Eugene Savage, and Cary’s Kingswood Elementary School in 1953, also with Savage. His school designs, following current prototypes promoted for public schools, typically featured long, symmetrical façades with a central main block and restrained detailing. The drawings for the Kingswood Elementary School are held at Special Collections Research Center, North Carolina State University Libraries, Raleigh, North Carolina.

On November 20, 1966 the Raleigh News and Observer reported Simpson’s death in Raleigh at the age of 83. At that time he lived at 501 North Person Street and was survived by both of his daughters, three grandchildren, and seven great-grandchildren. His funeral was held on November 21 at Mitchell Funeral Home, and he was buried in Raleigh’s Oakwood Cemetery.