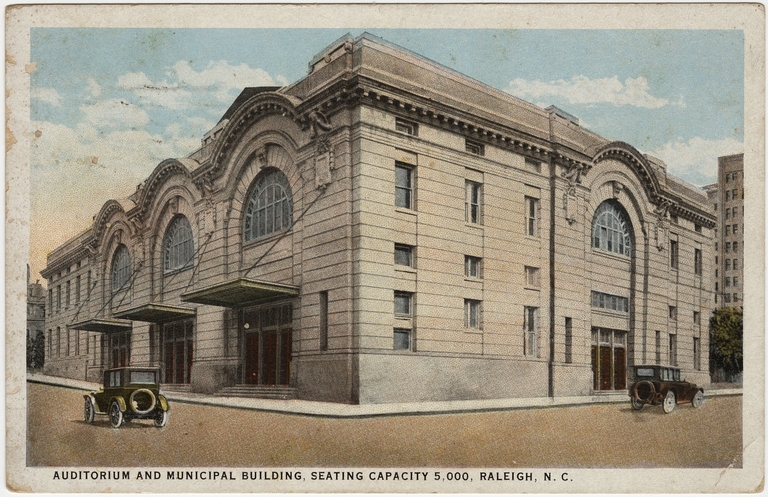 Frank K. (Kingsbury) Thomson (April 21, 1872-July 14, 1961), engineer and architect from Ohio, was an experienced and practical professional who worked in Raleigh from 1896 into the 1910s, mainly in partnership with the younger architect Charles W. Barrett.

Born in Cincinnati, Ohio, to James and Julia Thomson, Frank Kingsbury Thomson (often misspelled Thompson) gained his early training at New York City trade schools and later attended the Pratt Institute in New York. After graduation in 1891, Thomson traveled throughout the country as a superintendent of construction for the Quartermaster’s Corp of the United States Army, “planning public buildings at various military posts throughout the North and Northwest,” as he wrote in 1910. He left government service to work for the W. E. Frost Manufacturing Company of Chicago and the J. S. Carter Company of St. Louis as a building superintendent. In St. Louis, Thomson furthered his education by attending the Academy of Architecture and Building. By 1896 he had sufficient experience to find employment with David Getaz (see David Getaz), a large contracting company in Knoxville, as designer and superintendent.

In 1896 Thomson moved to Raleigh, North Carolina, as a representative of Getaz to open a branch office of the firm. His first two designs, both in Raleigh, were Queen Anne style houses for W. T. McGee and J. E. Pogue (thus far unidentified). For Trinity College (now Duke University) on its new campus in Durham he planned and may have built the Training School and the Dining Hall and Club Rooms. In Louisburg, Thomson designed and superintended construction of the Louisburg Female College Auditorium and a business block for the firm of Hicks and Allen (Hicks and Allen Store).

By 1900, Thomson had established an architectural partnership in Raleigh with Charles W. Barrett, a young architect from Kansas who was the nephew of the widely published and prolific mail order architect George F. Barber. In that year, perhaps influenced by Barber, Barrett and Thomson published a promotional booklet, Photographs, Barrett & Thomson, Architects, 1900 (1900), which pictured numerous buildings but did not distinguish which man had designed which building. Some were Thomson’s works, as indicated by his subsequent accounts, and others were Barrett’s, which reappeared in his own booklet, Colonial Southern Homes (1903). In 1903 and in subsequent years, Barrett and Thomson also published Plans for Public Schoolhouses, which featured plans and estimates of construction for public schoolhouses for use by the North Carolina state superintendent of schools and local school boards in planning both city and rural school facilities. Among the many examples built from the book’s designs are two in Alamance County, the McCray School (1911) and the Woodlawn School (1911-1912). The volume noted that plans for the schoolhouses could be obtained from Barrett and Thomson in Raleigh, and it appears that many local school boards took advantage of that offer.

Even when they were partners, Barrett and Thomson evidently worked independently as well as together. According to the separate biographical sketches they supplied for the local chamber of commerce publication, Raleigh Illustrated (1910), the more experienced Thomson concentrated on engineering and structural concrete construction, while the younger Barrett specialized in small office and residential design. In Raleigh Illustrated, Thomson reported that he had accomplished engineering commissions for heating, ventilation, and sewer improvements for thirty buildings under the auspices of the State Hospital Commission; had a contract to install heating, lighting, and ventilation systems in the State Capitol; was planning reinforced concrete buildings for the State Fairgrounds; and was consulting and supervising architect for City Hall and Auditorium in Raleigh (designed by Atlanta architect P. Thornton Marye). He noted as well that he had planned buildings in nearby communities, including Durham, Louisburg and elsewhere. (See also A. H. Vann House in Franklinton, Special Collections Research Center, North Carolina State University Libraries; MC 225 Series 11: Residence for Mr. A.H. Vann, Franklinton.)

While in Raleigh, Thomson took an important role in the development of the state’s architectural profession. He served as vice-president and director of the North Carolina Architectural Association in 1910, and he was involved in early efforts to form a state chapter of the American Institute of Architects. As early as February 9, 1899, Thomson wrote to the national AIA secretary Glenn Brown hoping to form a chapter in North Carolina and asking for literature on the subject. He found little local support but persisted in his efforts. In 1901, when he wrote to ask for application forms for AIA membership and asked if there were any members already in the state, Thomson observed, “The profession is in bad shape in this State there being no code of ethics or schedule of professional charges. Our firm we think is the only one in the State following the AIA schedule of charges, etc. We would be glad to see a change.” (Not until 1913 was a chapter formed in the state, assisted by Louis H. Asbury of Charlotte, Glenn Brown, and others, and with Charles E. Hartge the only chapter member from Raleigh.) After North Carolina passed an architectural licensing act in 1915, Thomson was one of the group of men who obtained licenses based on his having been in architectural practice prior to 1915, and obtained certificate #41 in July 1915.

In 1910 the United States census listed Thomson, 37, with his wife Jessie (Allen), 29, in Raleigh, with two children, Allen, 5, and Grace, 11 months old, and Jessie’s sister, Lucinda. Shortly after 1910, Thomson’s partner Charles Barrett left Raleigh for the west. Thomson, however, remained in Raleigh for a time. In an undated AIA survey form on “preparedness” for World War I, Thomson stated that he was 44 and a resident of Raleigh. In answer to the question, “Can you drive a motor car?” he responded, “No, but can ride a cavalry horse.”

Thomson served during World War I, and nothing is known of his work thereafter. What took place in his life and career during and after the war has yet to be determined, though the abrupt change after the war raises the question of possible war injuries. In 1920, Jessie Allen Thomson and her children were living with her mother, Emma, and other Allen family members in Washington DC. By 1930, however, Frank and Jessie were residing in Fayetteville, North Carolina, with their grown daughter Grace Moore and her son Allen, plus their younger children James, 17, and Frank, Jr., 7. Frank, Sr., 57, was still practicing architecture, but his late work has not been identified. He died in Fayetteville in 1961 in the Veterans’ Hospital, giving his occupation as engineer.