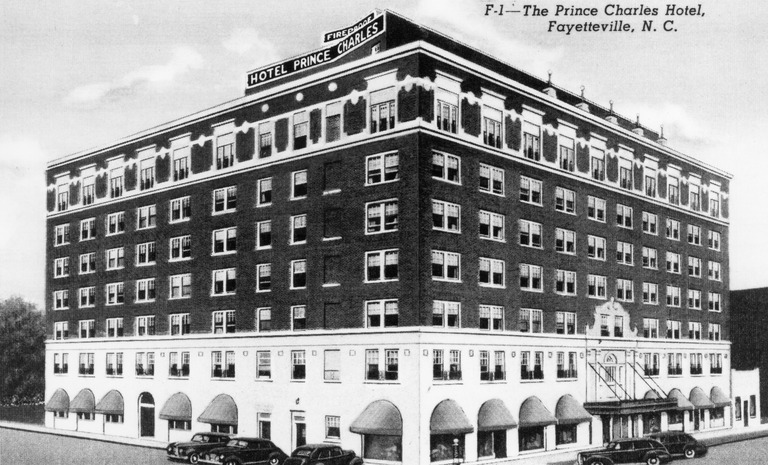 Stiles S. Dixon (November 18, 1891-October 25, 1936) was an architect active in Fayetteville and nearby communities during the early 20th century. He was considered Fayetteville’s leading architect for several years. His work, alone or in collaboration with other architects, includes some of Fayetteville’s most notable buildings of the 1920s including the Cumberland County Courthouse and the Prince Charles Hotel as well as public schools and private residences. Working in the popular styles and forms of the day, he typifies the numerous early 20th century architects who helped define the architecture of their home communities.

Stiles Sedberry Dixon was a son of Arthur E. and Elizabeth Sedberry Dixon of Fayetteville. Arthur E. Dixon, variously identified as a native of Kansas and California, reportedly came to Fayetteville as a young man and became a locomotive engineer and manager of an ice company. Elizabeth Sedberry Dixon was part of an established Fayetteville family. Stiles Dixon, named for his maternal uncle, Henry Stiles Sedberry, was educated at local schools before attending the University of North Carolina and the University of Pennsylvania. He married Vida Dickinson of Wilmington, N. C. in 1915. In 1913 and again in 1919, he was listed in the Fayetteville City Directory as a bookkeeper at the Fayetteville Ice and Manufacturing Company, where his father was the manager. His pre-1920 architectural work has not been identified.

The Fayetteville Observer of February 10, 1920, carried an announcement that Wilmington architect Henry E. Bonitz was opening a branch office in Fayetteville, which was to be managed by Stiles S. Dixon. Of Dixon, the notice said only that he had “much practical experience in the offices of successful architects.” The United States Census of 1920 listed him as an architect and head of a household that included his wife Vida and young sons Arthur and Charles. (In 1930 his household also included sons Stiles S., Jr., and John.) Stiles Dixon was identified as the architect for the Huske Building “soon to go up on Hay street” in Fayetteville. In 1921 the Fayetteville Observer of November 24, reported that Dixon had been elected to membership in the (national) American Institute of Architects. During the 1920s he undertook major projects in Fayetteville and beyond.

In 1922, the Wilmington Star of June 30 and other newspapers announced that construction was soon to begin on “the first skyscraper in Fayetteville,” to house the National Bank of Fayetteville and stand 10 to 12 stories tall in a prominent spot on the northwest corner of Market Square, the center of the town. The architects were identified as William G. Rogers [Willard G. Rogers] of Charlotte and Stiles S. Dixon of Fayetteville. The Charlotte Observer of June 29, 1922, also reported on the proposed bank and noted that Dixon was also the architect for a proposed Fayetteville Elks Lodge on Hay Street and Old Street; the fate of the Elks project is unknown. Evidently the 1922 bank project encountered problems and was not completed at that time; it appears that the commission was shifted to Greensboro architect Charles C. Hartmann, who designed the 10-story building constructed in 1923-1926.

Meanwhile, according to the Wilmington Star of December 23, 1923, Dixon had associated with architect Harry Barton of Greensboro as architects for the new Cumberland County Courthouse, an imposing Beaux-Arts Classical edifice in pale gray stone. The same article also noted that Stiles was also “now collaborating with Willard G. Rogers, of Charlotte, in designing the plans for the new Prince Charles Hotel to be erected at Fayetteville,” a 7-story brick building sponsored by local investors to serve the growing demand from travelers on the rail and highway route to Florida. Also during the 1920s Dixon gained commissions to plan local public schools, including Massey Hill School , Seventy-First School, Stedman School, Linden School, and Gray’s Creek School. For him as for many other architects, the school consolidation construction campaigns of the 1920s provided bread and butter work and produced architect-designed schools according to state standards. His projects also included several residences, such as the Frank H. Stedman House of 1925.

He also won commissions beyond Fayetteville, of which one of the most prominent was the Carolina Theatre (1927-1928) in Lumberton, a 3-story, brick building with elaborate classical detail.

Dixon gained a noteworthy clientele in the Sandhills resort area of Moore County, not far from Fayetteville, where his designs included both formal and informal residences in Pinehurst and Southern Pines, typically elaborate year-round vacation homes for wealthy northerners, such as the Lloyd-Howe House in Pinehurst. He was one of several notable North Carolina and northern architects who designed the communities’ architecture. Stiles’s brother Frederick Dixon was a managing partner in the regional construction firm of Reinecke and Dixon, which built the Lloyd-Howe House and others in Pinehurst.

His career was cut short by his death at age 43 of tuberculosis. The Wilmington Star of October 26, 1936 identified Stiles S. Dixon as a “prominent Fayetteville architect” who had designed “a number of outstanding buildings in Fayetteville, including the Cumberland County Courthouse and the Prince Charles Hotel.” He was survived by his wife, Vida and his children, siblings, and parents. He was buried at Cross Creek Cemetery in Fayetteville.