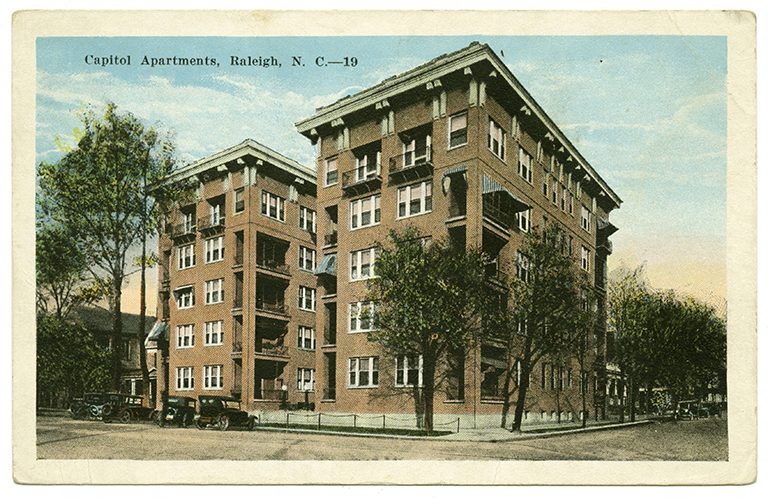 C. V. York (June 23, 1876-July 4, 1941), a native of Randolph County, N. C., became a major contractor in Raleigh during the first half of the 20th century, executing designs by various architects for such civic landmarks as the Capital Apartments, the Sir Walter Hotel, and the North Carolina State University (NCSU) Bell Tower as well as classroom buildings at the university. Probably his best-known monument is the Raleigh Memorial Auditorium. The firm he established continued with his son, developer J. Willie York, the creator of Cameron Village, and subsequent generations.

As related by John Sharpe in Growing Up With Raleigh: Smedes York Memoirs, Charles Vance York was born in Randolph County to John Robert Kingsbury York and his wife Margaret Ellen. The family, which grew to include eight daughters as well as son Charles, moved to Clemmonsville in Davidson County to live with Margaret’s mother. When C. V. was 12 years old, his father died at age 53. Margaret moved the family to Salem (present Winston-Salem) for better educational opportunities for her children, and C. V. attended the Salem Boys’ School. His early life shows the combination of maternal support, personal ambition, and hard work that characterized many successful men who grew up in modest circumstances. After his schooling, York worked for a time as a laborer at the Reynolds Tobacco Company and saved his earnings to go to college, and in 1899 at age 23 he went to Raleigh to study at present NCSU.

After two years, York left college to begin work in construction with the Cobb brothers, R. J. and Cecil, who had a lumber and building firm in Greenville, N. C. How York connected with the Cobbs is not clear. In Greenville he met Mabel Anderson of a prosperous local farming family, and the couple married in 1903 and began a family. He was 26, she only 17 years of age. York soon joined with R. J. Cobb to form the York and Cobb Construction Company.

The York and Cobb Construction Company established its reputation by erecting the imposing Jarvis Memorial Methodist Church (1904-1907) in Greenville, designed by prominent New Bern architect Herbert W. Simpson. Likely this accomplishment facilitated York and Cobb’s gaining the plum contract (1908) to build the first five buildings for present East Carolina University in Greenville, which had been founded the year before. These buildings were designed by architects Herbert Simpson and Charles Christian Hook of Charlotte; Jarvis Hall is the best preserved survivor of the group. Contracts for projects beyond Greenville soon followed, including the Knights of Pythias Orphanage near Clayton; a public school in Tarboro (Tarboro Southerner, July 1, 1909); a proposed building at the State Fairgrounds in Raleigh in 1910; and a state school “for the feeble-minded” near Kinston (Greensboro Daily News, February 4, 1912).

Especially prominent was the large and imposing Electrical and Engineering Building (present Winston Hall) of 1910 at present North Carolina State University, which was designed by Raleigh architect Frank B. Simpson. The Charlotte Observer of April 10, reporting on the new engineering building, noted that York was a “former A. and M. student, who has made a most successful contractor. His firm contracted for the handsome building of the Eastern Training school [present ECU].”

In 1910, the United States Census recorded Charles V. York as a contractor residing on 4th Street in Greenville, heading a household that included Mabel and their three young children. With major projects in Raleigh, York soon decided to move to the growing capital, which would become his family’s permanent home and where he would establish his own firm. The Raleigh city directory of 1911 listed C. V. York as living on South Boylan Avenue near Cabarrus Street (in the relatively new suburb of Boylan Heights). He was listed as part of the firm of York and Cobb. According to Sharpe, York soon bought out Cobb’s interest in the firm. An advertisement on the back cover of the 1914 Raleigh city director read, “C. V. York, General Contractor, Successor to York and Cobb. . . Raleigh.”

In 1920, the United States Census recorded C. V. York, contractor, residing on South Boylan Avenue with Mabel and their five children. A decade later, the 1930 census found the family living at 1002 Cowper Drive in the prestigious new Hayes Barton suburb northwest of the city center, which York helped to develop. By the late 1930s, the firm was listed in Raleigh city directories as C. V. York and Son (the “son” was J. Willie York, who began working with his father at a young age).

A major project for C. V. York’s firm was the Capital Apartments (ca. 1917) at a prime location a block east of the State Capitol near Christ Episcopal Church. It was the city’s first multi-story, modern apartment building, a 5-story Beaux Arts edifice of buff brick featuring a central courtyard, inset balconies, and a bold cornice with paired curving brackets. The project was conceived, managed and financed by the Capital Apartments Corporation. It was designed by architect James A. Salter, who was a shareholder in the company along with York, who was also the contractor for the building. An early example of York’s multifaceted role as developer and contractor, the apartment building was prominently featured in the Raleigh News and Observer of November 16, 1916, with a long report and a large illustration. The newspaper account cited the fully modern apartment house, long needed in the community, as “another evidence that Raleigh is getting to be a city of proportions.”

York established connections with state and local leaders as well as a strong reputation as a builder. He served on the city planning commission. He participated in construction and development of suburbs such as Hayes Barton and Bloomsbury Park, which embodied the “City Beautiful” movement and appealed to elite and middle-class clients. He also gained commissions for important public projects.

Among his prominent works were the Memorial Bell Tower at present NCSU and Raleigh’s leading hotel, the Sir Walter Hotel, designed by James A. Salter and New York hotel architect William Lee Stoddart, but his premier project was surely Raleigh’s Memorial Auditorium, built in 1931-1932. A major commission during the early years of the Great Depression, it was funded with Federal assistance and provided employment to many. Like the Bell Tower, the massive neoclassical style municipal auditorium was dedicated to the military who died in World War I. It was designed by the prolific architectural firm of Atwood and Weeks, known for their work at the University of North Carolina. In good Beaux Arts fashion, the edifice created a dignified south terminus to Raleigh’s Fayetteville Street (the main street of the city), with its Doric façade complementing the State Capitol at the north end.

The company and the family that C. V. York founded continued his legacy. His son, J. Willie York, became a major developer and builder best known for founding the innovative Cameron Village Shopping Center in Raleigh in 1949 and a civic leader for many years; Willie’s son, Smedes York, continued the family tradition of development and construction and civic leadership and served as mayor of Raleigh. Today the York company encompasses multiple facets of real estate, property management, and construction.