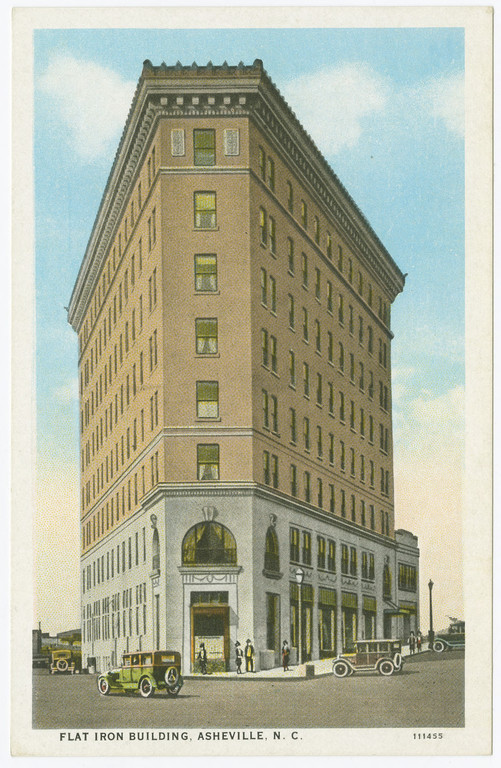 Albert Carl Wirth (May 7, 1890-1930 or later), architect, moved to North Carolina from Buffalo, New York, in 1916 and designed buildings in a variety of styles, including commercial buildings, apartment houses, and automobile dealerships in Greensboro, High Point, and Asheville, then returned to Buffalo by 1930.

Wirth was born in Buffalo to Philip C. and Louisa Wirth, who were of German and Swiss ancestry. In 1910 the United States Census recorded Albert Wirth, aged 19, living with his parents in Buffalo and already working as an “architect.” During the period 1907-1913, he served as a draftsman for various architects and firms, presumably in the Buffalo area, including E. A. Kent; Green and Wicks; McCreary, Wood and Bradney; H. Osgood Holland and G. Morton Wolfe. He gained additional training and education at a school of design in Toronto in 1913-1914, then practiced on his own for two years. As a young man, Wirth moved to Greensboro, where he became chief draftsman for Harry Barton, the city’s preeminent architect, from 1916 to 1919. Why he chose Greensboro is not known, but he was one of many men drawn to the growing city. During this period, he enlisted in the United States Army and served from May to December, 1918. In August, 1918, he married Nettie Leete Parker of Lakewood, New Jersey. Their children, Antoinette and Albert, Jr., were born in Greensboro in 1919 and 1923, respectively.

Relatively few of Wirth’s designs from his Greensboro years have been identified. Records of those built by the Southeastern Construction Company are in the Beaumert Whitton Papers at the University of North Carolina at Charlotte.

In 1924 Wirth moved to Asheville, the booming resort city full of ambitious clients and architects, evidently at the invitation of architect Albert Heath Carrier of the prolific firm of Smith and Carrier. Following Smith’s death earlier in 1924, Carrier wrote to his daughter Catherine on October 6 that Wirth, a Greensboro architect, was planning to arrive on the 10th to help on his projects and also do work on his own account. Although Carrier soon retired from practice, Wirth found Asheville a good situation. He became a founding member of the “Architect’s Association of Western North Carolina,” which announced its formation in the Asheville Citizen of July 4, 1926. He planned buildings for some of the city’s leading citizens, including a residence for developer L. B. Jackson, who erected the Jackson Building skyscraper downtown from a design by Ronald Greene and built by Luther L. Merchant. Albert Wirth’s best known building in North Carolina is the imposing, classically detailed Flatiron Building (1925-1926) in Asheville, a limestone-faced, 8-story edifice that is considered the state’s best surviving example of the wedge-shaped urban form seen frequently in larger cities. The Flatiron Building was constructed as part of E. W. Grove’s redevelopment of the Battery Park area that also included the Grove Arcade designed by architect Charles N. Parker.

Wirth is also credited with several other buildings in Asheville, Greensboro, and High Point, including such up-to-date types as automobile dealerships and apartment houses. He employed a variety of styles from classical to exotic. For the Hardee Apartments (1925) in High Point, for example, he used a Spanish-inspired style evocative of domesticity and sunny climes. Doubtless he designed other buildings as yet unidentified in Greensboro, High Point, Asheville, and perhaps elsewhere. While in North Carolina, Wirth joined civic and professional organizations including the Kiwanis, Old Colony, and Greensboro Lodge No. 602, B. P. O. E., and the North Carolina chapter of the American Institute of Architects, serving the AIA as a board member for two years. He was licensed to practice architecture in North Carolina in 1919 with certificate #94. By 1930, probably responding to the precipitous drop in construction after the Crash of 1929, which hit Asheville especially hard, Wirth had moved with his family back to Buffalo. His date of death has not been documented.