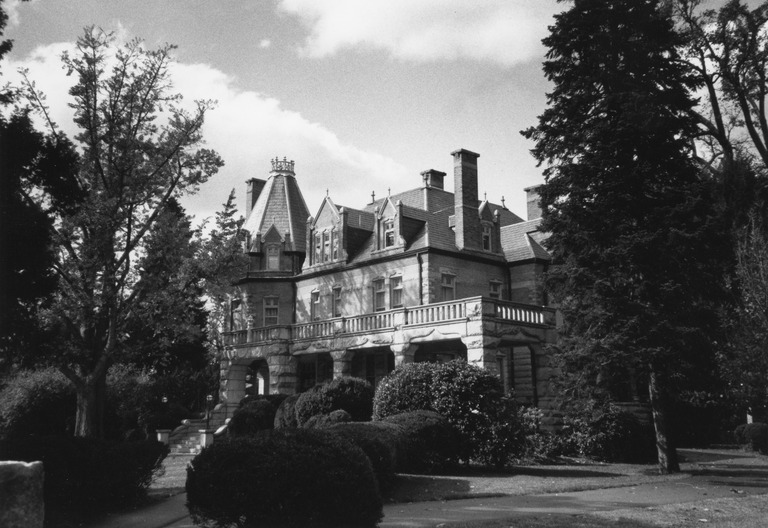 Alfred Ross Lazenby (December 5, 1867-November 24, 1943), a native of Iredell County, N. C., became a contractor-builder in the western Piedmont. Residing first in Statesville and then in Salisbury, he executed several major buildings designed by such leading regional architects as James M. McMichael, Oliver Duke Wheeler, and especially Charles Christian Hook, all of Charlotte, and Frank P. Milburn. Lazenby also may have planned some buildings himself or used published designs. He was noted for his substantial masonry buildings, some of which employed the granite for which the Salisbury area was known. His best-known surviving work is the Hambley-Wallace House in Salisbury, designed by C. C. Hook and featuring the local granite. Lazenby likely built many other buildings in Salisbury and Statesville and beyond, which have yet to be identified.

According to a biographical sketch published during his lifetime in The History of North Carolina: North Carolina Biography (1919), Alfred Ross Lazenby was one of eight children of Humphrey Bennett Lazenby and Elizabeth Tomlinson. There were numerous members of the Lazenby family in Iredell County; the surname is associated with northern England. Alfred began an apprenticeship at the carpenter’s trade at age eighteen, and after working briefly at a store in Statesville, became a journeyman carpenter.

Alfred and his brother William established a contracting business under the name of Lazenby Brothers in Statesville, the Iredell County seat, which continued until about 1900. One of the firm’s first known local projects was the Key Memorial Chapel of 1898 in Statesville, a small, Gothic Revival style brick Catholic church. In 1899, the Statesville Record and Landmark of August 22 reported that Lazenby Brothers (Bros.) were working on construction of the Billingsley Hospital and a residence for Mr. J. L. Sloan on Davie Avenue (not identified). The Statesville newspapers occasionally made mention of Lazenby Brothers (Bros.) building houses or cottages for local citizens and sometimes for Salisbury residents as well. Indicative of how the firm operated, the Statesville Carolina Mascot reported on May 4, 1899, that A. R. Lazenby had gone to Salisbury to supervise construction of a residence for Captain Overby, for which Lazenby Brothers had the contract. Further research might pin down the identity of some of the houses mentioned in the local papers. It is also likely that the firm built some of Statesville’s handsome masonry commercial buildings.

Lazenby Brothers also submitted a bid for constructing the Iredell County Courthouse in Statesville but lost the job to contractor Nicholas Ittner of Atlanta, who entered the lowest bid. (It was later reported that Ittner lost money on the courthouse project.) Local and regional contractors often bid against one another for substantial contracts. In 1902, for example, the Durham Sun of June 13 reported that a local man, Mr. N. Underwood, had won the contract for a city market and auditorium, with other bidders including Lazenby Brothers “of Charlotte,” Nicholas Ittner of Atlanta, William Carter Bain of Greensboro, and R. E. Wilkinson of Durham.

In 1899, Alfred Ross Lazenby married Minnie Estelle Rickert, with whom he would have one child, Alfred Rickert Lazenby. (There was also another man in Iredell County, kinship unclear, named Alfred Ross Lazenby.) The couple soon moved to Salisbury, where Lazenby became a leading contractor. In 1899, the Statesville Record and Landmark of September 1 had noted that “Messrs. Lazenby Bros. are winning favor in Salisbury. They have just closed a contract with Mr. Lee S. Overman for the erection of a handsome brick building which will be occupied by the postoffice”—evidently the Washington Building noted below.

Lazenby Brothers’ most spectacular project in Salisbury was the splendid Chateauesque mansion of 1902 designed by C. C. Hook for mining engineer Egbert Barry Cornwall and known as the Hambley-Wallace House. The Manufacturers’ Record of October 24, 1901 reported that Hambley had awarded the contract for his proposed dwelling, designed by C. C. Hook, to “Lazenby Brothers of Salisbury and Statesville.”

The firm worked hard to expand their field of operations. In 1898 the Statesville Record and Landmark reported on May 27 that A. R. Lazenby had gone to Davidson to superintend construction of a house for Mrs. W. D. Vinson for which Lazenby Bros. had the contract. In 1900 A. R. Lazenby traveled to the town of Concord where he obtained a contract for Lazenby Brothers to build a hotel in the town of Albemarle for Huckabee and Little Brothers (Salisbury Evening Sun, April 25, 1900). In 1901, the Carolina Mascot reported on May 23 that W. J. Lazenby of Lazenby Brothers had been in Durham to present plans for a new library building at Trinity College.

Especially important, the Manufacturers’ Record of November 7, 1901, noted that “Lazenby Brothers of Statesville” had received a $25,000 contract to erect a proposed Carnegie Library in Charlotte, a prominent edifice designed by Wheeler, McMichael, and Company (the short-lived partnership of Oliver Wheeler and James M. McMichael). Shortly after this, the Manufacturer’s Record of November 14, 1901, said that Lazenby Brothers of Statesville had a contract to build a proposed Graham Street Presbyterian Church in Charlotte after plans by Hook and Sawyer, which was actually built in 1902 as Tenth Avenue Presbyterian Church. For a time, Lazenby Brothers had an office in Charlotte.

How long the partnership of Lazenby Brothers operated is not clear, nor how the brothers divided up projects. They apparently went their own ways around 1903. When the Manufacturers’ Record of February 19, 1903 noted that the contract had been awarded for Salisbury’s Methodist congregation’s parsonage from designs by Hook and Sawyer, the contractor was identified as A. R. Lazenby. However, in a testimonial dated April 20, 1903 and published in the Lumberton Argus of February 11, 1904, “Lazenby Bros. General Contractors and Builders, Charlotte, N. C.” provided a recommendation for an electrician named Drummon Marrow and noted, “his contract with us included the Washington office building Salisbury, N. C. ($25,000.), Mr. E. B. C. Hambley’s palatial residence ([$]75,000.), Salisbury; Carnegie Library ($25,000.) Charlotte.” The notice also cited residences for Dr. C. E. Bland, Mr. E. A. Keuppleberg, and Mr. Richard Moore in Charlotte, and Mr. C. W. Boshamer and Emiel Clarke “and others” in Statesville. William Lazenby’s subsequent activities are not known.

The 1919 biographical sketch of Alfred Lazenby confirmed that he had built “many of the finest residences, business blocks, and public buildings in this section of [Rowan] county,” including the First Methodist Episcopal Church in Salisbury and the Central Methodist Church in nearby Spencer. His work was “specially noted for its thoroughness, artistic beauty and durability.” According to local historian James Brawley (Salisbury Sunday Post, April 18, 1971), he had also erected the First Baptist Church near Salisbury’s English Cemetery in 1890; it no longer stands.

Especially prominent in downtown Salisbury are the stone-faced Washington Building, a striking display of stonework believed to have been designed by Charles Christian Hook for politically prominent citizen Lee S. Overman and the Empire Hotel, designed by Frank P. Milburn. Other substantial business blocks of the early 20th century in Salisbury may also have been Lazenby’s work, such as the “Bell Building” erected for Lee S. Overman in 1899. Lazenby later took the contract in 1923 for a major expansion of the 1913 Yadkin Hotel near the railroad station (see Wheeler and Stern). Of Lazenby’s “many” fine residences, few have been identified. Among these is the large, columned Cannon-Guille House of 1906 in Salisbury, designed by prolific Charlotte architect James M. McMichael. Other examples of Lazenby’s work have been lost, while others have yet to be identified.

Lazenby’s and Lazenby Brothers’ projects comprise some of the most substantial and ornate buildings of their time and place. Their execution required knowledge of masonry construction, including in some cases the use of local granite, and administration of a multi-skilled work force. As is true of many builders, the architects of such imposing buildings are often well known, but the contractors and their artisans who executed them are less recognized. Most construction notices in the Manufacturers’ Record, for example, cited the architects for new or planned buildings (who probably sent in the information) but seldom identified the contractor or builder. The Charlotte architects whose designs Lazenby had executed were also represented in the Manufacturers’ Record as designers for many other buildings in Salisbury, Statesville, and Charlotte during Lazenby’s period of work, but only rarely is the builder contractor named, with contractor Nicholas Ittner of Atlanta rare exception.

A. R. Lazenby’s last known project came in about 1930 when he undertook a contract for a large Colonial Revival country residence for the Griffith family—the Griffith-Sowers House. Financial reverses forced the Griffiths to stop construction in 1932, and the unfinished house was sold at auction in 1933. Whether Lazenby was fully paid for his work and possible outlay or debts for materials, wages, or subcontracts is unknown. None if his subsequent work if any has been identified. He was named Salisbury’s city building inspector in 1941.

Alfred and Minnie Lazenby were members of First Methodist Church in Salisbury. Alfred was buried in Chestnut Hill Cemetery in Salisbury.