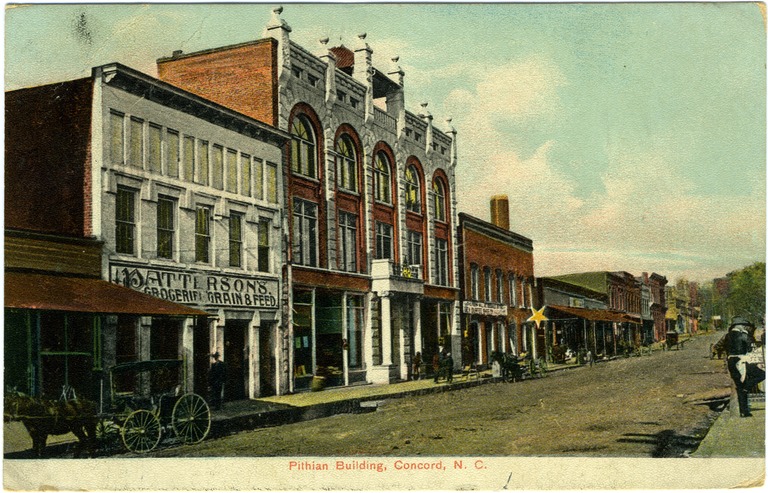 Frank M. (McMurray) Sawyer (ca. 1872-after 1940?) was an architect born in Magnolia, N. C. (some accounts said Wilmington) who worked in Wilmington, Charlotte, and elsewhere in North Carolina from the 1890s until he moved to California in 1910. He worked both on his own and with severalassociates, most notably with Charlotte architect Charles Christian Hook as Hook and Sawyer.

Several months later, the Wilmington Dispatch of October 13, 1898 noted that Sawyer, “formerly of this city,” had recently formed a co-partnership with architect Charles C. Hook of Charlotte and would “pursue his profession as an architect in that city.” This was the first of three architectural partnerships Hook established, which enabled him to expand his firm’s field of operation. Hook reported to one of his clients, President Charles McIver of the present University of North Carolina at Greensboro, on November 11, 1898, “I now have Mr. F. M. Sawyer of New York associated with me, and [we] are doing a great deal of work throughout the state” (Michael, 76); Hook surely knew that Sawyer was not a New Yorker, but may have wanted to capitalize on Sawyer’s experience there. All of Sawyer’s known architectural projects in North Carolina date from his period with Hook.

It appears that Sawyer was often sent to supervise projects at a distance from Charlotte, though Hook likewise traveled frequently to meet with clients and contractors across much of the state. Thus in 1899 the Wilmington Messenger of August 24 reported on “the success of our former young townsman, Mr. F. M. Sawyer, now active in Charlotte, who had been appointed recently as “supervising architect of the Southern Conservatory of Music, which the Dukes are building at Durham” with Hook and Sawyer as the architects. In 1900, Sawyer and W. E. Glenn, contractor, arrived in Wilmington from Charlotte to begin work on the Elks Building in Wilmington (Wilmington Star, June 6, 1900). Between 1898 and mid-1905, the firm reported 78 projects to the Manufacturers’ Record. In 1902 the pair published Some Designs of Hook & Sawyer, 1892-1902 (which included some projects predating their partnership). The Charlotte Observer of July 4, 1903, carried a report from the Durham Herald that Hook and Sawyer were about to open a branch office in Durham, and that Sawyer would move to Durham, while Hook would remain in Charlotte.

Hook and Sawyer’s works included prominent churches, educational buildings, residences, and civic buildings. Among the most notable of those that still stand are the chateauesque Hambley-Wallace House in Salisbury, the Pythian Building in Concord, and Spencer Hall at the University of North Carolina at Greensboro.

During their partnership, occasional accounts specifically noted Sawyer’s activities. In 1904, Sawyer went to Salisbury, N. C., to “look after” the new opera house and Masonic building and other work in that town (Charlotte News, June 23, 1904). In 1905, Sawyer “of the firm of Hook & Sawyer” was in Wilmington “looking after plans” for the Princess Theatre to be erected there. Sawyer said he had “already built five theatres and it is his intention to make the new play house in Wilmington their masterpiece” (Wilmington Dispatch, January 1, 1905). On another occasion, President McIver wanted Hook to be on site for opening of bids for a building at the college in Greensboro, but Hook said that Sawyer would be in the area and would be better to supervise the project because he had designed it (Michael, 83).

The partnership between Hook and Sawyer was dissolved in mid-1905. Hook then formed the partnership of Hook and Rogers with Willard G. Rogers, who had moved to Charlotte to associate with the engineering firm of Stuart W. Cramer.

After his partnership with Hook was dissolved, Sawyer led a varied and mobile life. Later in 1905 he formed a business arrangement with William P. Rose of Raleigh to manufacture in Charlotte a composite roofing tile reportedly invented by Sawyer; several branches of the Composite Tile Company were planned (Wilmington Star, October 27, 1905). He received a patent for a “tile mold” in 1906 and continued to patent various construction inventions for many years.

In 1907, the Charlotte News of April 4 noted that Sawyer had returned to the city after “an extended trip” through Louisiana, Texas, and other Southern States.” In 1908, he was planning to manufacture brick at Atherton in Charlotte (Charlotte Observer, August 22, 1908). He also continued his architectural practice, and the Charlotte News of October 13, 1910 noted that Mr. F. M. Sawyer, “the architect,” had completed plans for a residence for Mrs. J. E. Kavanaugh, a large, stuccoed house with a slate roof. The census of 1910 recorded Sawyer as a brick manufacturer aged 38, heading a Charlotte household that included his wife Corrie (Carrie), 33, and their children Frank H., 11, Kenneth, 7, Elizabeth, 4, and John, 2.

Before long, the Charlotte News reported on September 29, 1910 that Mr. and Mrs. F. M. Sawyer and their family were planning to leave for Los Angeles, following a physician’s recommendation that the California climate might improve Mrs. Sawyer’s health. On October 21, the newspaper reported that Mrs. Sawyer and her children “stood the trip well.” In 1913 the Charlotte Observer of April 18, reported that Sawyer, “formerly of this city,” was visiting from Los Angeles: he had “met with success in the West,” and was planning to go to Detroit and then to” embark on a trip around the world.” In 1920 Frank and Carrie and their children were in Los Angeles, where he was an inventor, and in 1930 he and Carrie were in Richmond, Virginia, where he was a manager in construction. Often cited as F. McM. Sawyer, he continued to produce inventions and appeared in various journals as an inventor of block and tile. References to him include an elaborate “Old Spanish Villa” in Coral Gables, Florida (1920), a Spanish Revival style house of reinforced concrete in Houston, Texas (1933), and a patented shutter operator (1946).

Evidently Mrs. Sawyer benefited from the stay in California, for the United States Census of 1940 listed her and Frank, both in their 60s, in Coral Gables, Florida. She is said to have died in Florida on June 25, 1944, and her gravestone is in Belton Cemetery in her native Anderson County, S. C. Frank M. Sawyer’s death date remains a question.